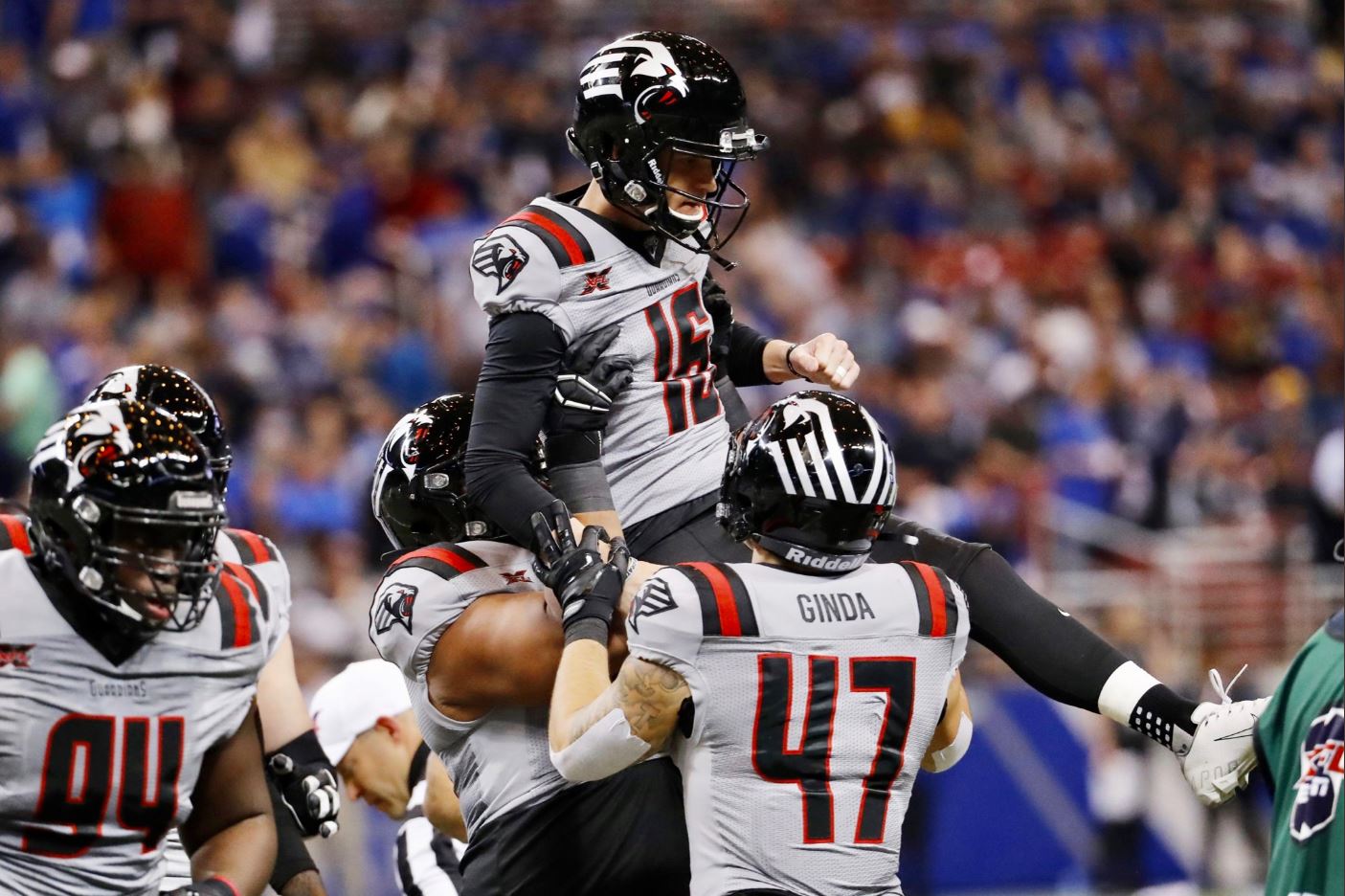 This past weekend, XFL teams cut their training camp rosters to 70, according to a post on the league’s Communications Department Twitter account. Initially, teams were supposed to carry a maximum of 66 players on the roster, with one cut-down date to the final 50-man regular season roster, to take place on or around February 8.

Some hang-ups in the deal with the NFL Alumni Academy, which guaranteed graduates an XFL opt-in contract and a spot in training camp, led to rosters expanding during January. Each team took on an additional nine or 10 players from the NFLAA who were not drafted in November or in the Supplemental Draft.

Rosters have been fluid since players began reporting to Arlington earlier this month. That was expected to happen during training camp. However, the XFL has not officially reported on any of these transactions. Luckily, through his league contacts and studying changes on the XFL.com rosters, @XFLAnalyst on Twitter has been reporting on these moves over the last several days. Using that as a guide, here are the moves teams have made to get down to 70, and some thoughts to accompany them.

For those released, I’ve included where they were drafted (“R” = what round, the second number is the overall selection; “OP” = Open Phase of the draft; “SD” = Supplemental Draft; “NFLAA” indicates they were assigned from that camp). For the Reserve List, if they’ve been signed to another league, that is noted in parentheses next to their name. They may also be on this list if currently injured or if they did not report. Keep in mind, the reserve list is an approximation given the lack of transparency in reasons for moving players off rosters since the draft. These transactions are as of Tuesday, January 24.

Analysis: Taylor, an edge player, is eligible for the 2023 NFL Draft, having played at Eastern Kentucky this fall. He started all 12 games for the Colonels, with 6.0 tackles for loss and 2.0 sacks. He is the second player to join the league with draft eligibility in April, joining Sea Dragons QB Harrison Frost. Moore was not signed to a futures contract by the Denver Broncos and his practice squad contract with them has expired. There’s a chance, then, that he eventually reports to training camp. Greer was signed as an undrafted free agent out of Wake Forest by the Kansas City Chiefs this past season. Hall has played WR and CB and was with the USFL last spring.

Analysis: The Defenders nabbed another USFL defector in Brown. He is joined by Murphy, a former 6th round draft pick of the Green Bay Packers, and Taylor, who has been on the fringes of the NFL since entering the league in 2018. That has helped fortify the team’s offensive line. McCrane’s signing indicates the experiment of Daniel Whelan at kicker is over; however, it appears he won the punting job with the release of Schum, who punted for the Tampa Bay Vipers in 2020. McCrane hit all eight of his field goals for the New York Guardians in XFL 2.0. Harris is one of three players so far signed to the XFL that ended the NFL season on practice squads. The Defenders may have improved their team more than any other in this first flurry of roster moves.

Analysis: Houston was quick to move on from the NFLAA assigned players, releasing six of their nine in this wave of cuts. They were replaced with some upper-level players, including Doxtater, who ended the NFL season on the practice squad of the New Orleans Saints but did not sign a futures contract. Holley was a fan favorite in Houston in 2020, so it’s good to see him return to the team. Wieland and Tippett both spent time with the New England Patriots during the 2022 offseason. Booker was recently let go, but it’s unclear how he was acquired: He wasn’t drafted or assigned and, before camp, those were supposed to be the only ways you could get on a roster. A tweet from an account purporting to be Booker claiming to be drafted by Houston was cited by Buckeyes Wire, though he doesn’t appear on the draft rolls and the article itself said he was not drafted, but signed. The acquisition of Vincent from the Brahmas is the first trade consummated in this version of the XFL, and the first transaction to be acknowledged by the league.

Analysis: Notable here are the number of early draft picks released by Orlando, including a few 5th rounders and an assigned QB. It’ll be interesting to see if the Guardians add a third QB for the rest of camp following the release of Kidd. Payton is a great pickup for Orlando: He averaged 22.9 yards per catch as a senior with Tennessee in 2021, then spent time on the Arizona Cardinals’ practice squad this year. Lauina is another player with 2020 XFL ties; he started at guard for the LA Wildcats that season. Auger was drafted as the team’s long snapper. They currently do not have another on the roster, unless someone is cross-training there while listed at another position.

Analysis: San Antonio was the only team to carry four quarterbacks into camp; they’re now down to three with the release of Russo. He was featured in the XFL’s QBX: Building an XFL Quarterback video. The Brahmas were hit hard by players getting signed to the NFL or returning to the USFL, which is a credit to their scouting and drafting ability. Like most teams, the Brahmas looked to improve their offensive line depth with the signings of Kelly and Mama. Kelly has been with the Saints and Mama has been in the NFL, AAF, XFL and USFL. Siverand’s NFL resume includes being released for trying to sneak a woman into the team’s hotel against COVID protocols and being arrested for street racing. Lewis was with the Roughnecks in 2020 and the USFL in 2022.

Analysis: Panasiuk is an interesting run-stuffer out of the Big Ten (Michigan State) who recently tried out for the Pittsburgh Steelers. Bradwell is a surprise release; he could find suitors elsewhere around the league that may be looking for help at the running back position. The team took some hits in the defensive backfield losing Stribling, Ross, and White. That makes three of their 11 draft picks from that phase already gone from the team (though they retain the rights to those on the Reserve List). Warmack is the brother of former first-round NFL draft pick Chance Warmack.

Analysis: Seattle is another team that has already jettisoned over half of its NFLAA-assigned players. Only one draft pick didn’t make the first cut, and that was a late Open Phase pick, so their draft has been a success thus far. Losing two potential starting offensive linemen in Davenport and Seltzner hurts, but they still have 13 players along the line on their roster at this point. Frost replaces Lewerke as the third quarterback. His chances of making the team may depend on whether the Sea Dragons keep two or three QBs. Thompson has been on and off the practice squad of the Saints the last two years. A leg injury late in the 2021 season prevented Cam’Ron Harris from getting a look as an undrafted free agent in 2022, though he did work out for the Carolina Panthers in October. Given his skillset, he’s an intriguing addition at the midpoint of camp.

Analysis: McKenzie didn’t waste time getting back into the XFL; his practice squad contract with the Ravens had barely expired when he was scooped up by Vegas. McKenzie returns to the west coast, where he played for the LA Wildcats in 2020. Allison is the biggest-name January signing for any team. He brings 49 games of NFL experience to the Vipers, with 89 receptions for over 1,000 yards to his name. The releases of Jones and Petrula are surprising, as they were both top draft picks in their respective phases. For Jones, father time may have caught up to him. He hasn’t played pro ball in two years and at 29 years old, it’s a lot to ask of someone to be effective at that position with that kind of layoff. Folston played three games for the Renegades in 2020 and was drafted into the USFL in 2022. Burt is a WR/RB hybrid listed by the Vipers at RB who ran a 4.34 at Fresno State’s Pro Day in 2019.