The Spring League filling gap left behind by the XFL

The Spring League’s value may not be as a glossy, well-delivered television product like the XFL aimed to be. 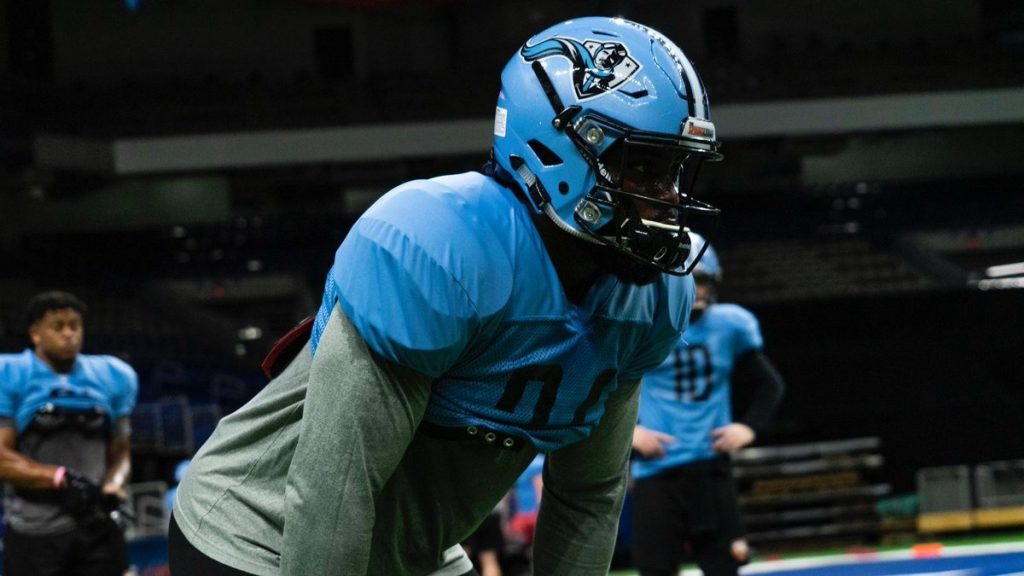 Running Back De’Veon Smith is using The Spring League as a showcase of his talent.

With the XFL on ice until 2022 and the CFL not playing in 2020, The Spring League has taken charge as the developmental football league of the moment. They’ve partnered with Fox Sports to air games on FS1, giving the group that started play in 2017 more visibility than ever before.

I watched two games from the first two weeks of TSL action (Conquerors vs. Generals and Alphas vs. Conquerors) and made some observations with an eye toward the XFL:

Uneven game play: If the XFL is Triple-A to the NFL’s Major Leagues, TSL would be Double-A. It’s no surprise then that game play was a bit behind the XFL in terms of quality. It’s even less of a surprise when you factor in each team had just six practices prior to week one and no padded practices during that time. The first week’s game, Conquerors vs. Generals in particular featured poor offensive line play. I’d expect to improve during the season. For this reason, it was somewhat difficult to assess quarterback play during these games.

Broadcast kept basic: The Fox Sports hype machine wasn’t as ramped up for TSL broadcasts as it was for the XFL, and the broadcast itself reflected that. A few players per game were mic’d, a much smaller amount than during XFL games; there were no sideline reporters to ask questions of players and coaches; cameras were allowed in locker rooms pre-game and at halftime; and there was no airing of coach-to-player communication. Is Fox simply keeping expenses down for TSL, or are they keeping some of those innovations in its back pocket in case the network re-ups with the XFL?

For a few plays, the camera followed the action from behind the quarterback, a feature of the XFL in 2001. At the time, that view of the game was roundly criticized by fans, and the XFL and NBC abandoned it after the first week. However, with more and more armchair scouts accessing All-22 footage (the NFL began releasing it themselves in 2012) in which that view is the norm, it may become more accepted to fans watching at home. I also want to sing the praises of Joel Klatt, who was a guest analyst for the Conquerors vs. Generals in week one. He was the best XFL analyst this spring and he’s a joy to listen to during college football season as well.

I haven’t been bothered by lack of crowds for most sporting events, but I thought it did hurt the overall presentation here. Maybe I’m just remembering how much enthusiastic crowds added to the atmosphere in the XFL, but a larger audience cheering on these players would’ve added greatly to the viewing experience. However, the circumstances of our time call for the empty stadium – it’s not something that can be blamed on choices made by the TSL. I also missed the XFL’s up-tempo approach to gameplay; the first game I viewed didn’t even reach halftime until one-hour and fifty minutes into the broadcast. That may be acceptable for NFL and college games, but for a league trying to get a foot-hold with new teams and unfamiliar players, the shorter the games, the better.

A platform for potential XFL players: We’re not quite sure where the “new” XFL is in its ongoing self-assessment, but one thing they need to be doing right now is creating a personnel department that can travel to college and TSL games (or if attending games isn’t an option due to COVID-19 restrictions, at least poring over game film) to find players who could be useful to the league in 2022. It’s never too early to start turning over rocks in search of players that will help sustain the quality of play needed to be successful.

Among those who stood out in the two games I watched were QB Kevin Anderson and DT Willie Yarbary of the Conquerors, RB Madre London and TE Bug Howard of the Alphas, and WR Kelvin McKnight and LB Dexter Wright of the Generals. These are players who could be on the XFL’s radar, if the league is doing its due diligence and scouting leagues like this right now.

A platform for former XFL players: In addition to those looking for their first crack at the XFL, TSL has provided an opportunity for former XFL players to stay sharp in the event they are called upon when the league re-starts. In the two games I watched, a few former XFL players made impact plays including Generals CB Channing Stribling (Seattle Dragons), Conquerors WRs Nick Holley (Houston Roughnecks) and Daniel Williams (Tampa Bay Vipers), and DB/KR Ajene Harris (Roughnecks).

It’s not just players who are looking to avoid getting rusty; it’s coaches too. From the sidelines, Roughnecks head coach June Jones is the offensive coordinator of the Conquerors, a team that is led by Jerry Glanville – the former Vipers defensive coordinator. Bart Andrus heads the Generals, coming off a stint running Team Nine for the XFL.

Small school fans rejoice: One of the criticisms some fans had of the XFL player selection process was how few small school players were featured. I often dismissed that criticism, figuring that (a) the XFL had a healthy amount of small-school players on rosters, and (b) it’s not about where the talent comes from but rather how talented those players are, and the XFL isn’t going to overlook ANY talent because of how important quality of play is in establishing a new league.

But if you’re still sore on that subject, TSL is for you. Almost every team has at least one quarterback from a small school, including ones from Nicholls State, Occidental, Mt. San Antonio College, Fordham, and Saint John’s (MN.). There are FCS and D-III schools littered throughout the rosters of the six teams in the league. It truly is an opportunity to show you belong with players from FBS schools.

More of a developmental league than the XFL: The two games I watched had a real “developmental” feel. The announcers often talked about this as well. The games felt more like college all-star games, like the Senior Bowl or East-West Shrine Game, than even XFL games. Players often rotated in by series or quarter, as the Conquerors did with quarterbacks Kevin Anderson and Justin McMillan. This gave all players on the roster an ability to put something on tape (it also could be because of the abbreviated training camp, coaches hadn’t settled on a final depth chart and were working that out in games).

The offenses and defenses played by coordinators were relatively basic like an all-star game, again, perhaps because of the limited practice time beforehand. The empty stadium, sadly, also reminded me of those all-star games that don’t tend to attract many local fans. Whereas XFL players may have been more fully developed, many of the players in TSL seemed to be trying to take that next step.

The Spring League’s value may not be as a glossy, well-delivered television product like the XFL aimed to be. It may be in providing a space for players to improve, make names for themselves, and catch the eye of a league like the XFL. The XFL benefits by having players ready to go in 2022, where those players can take a step up in competition and prove themselves to the next level: The NFL.