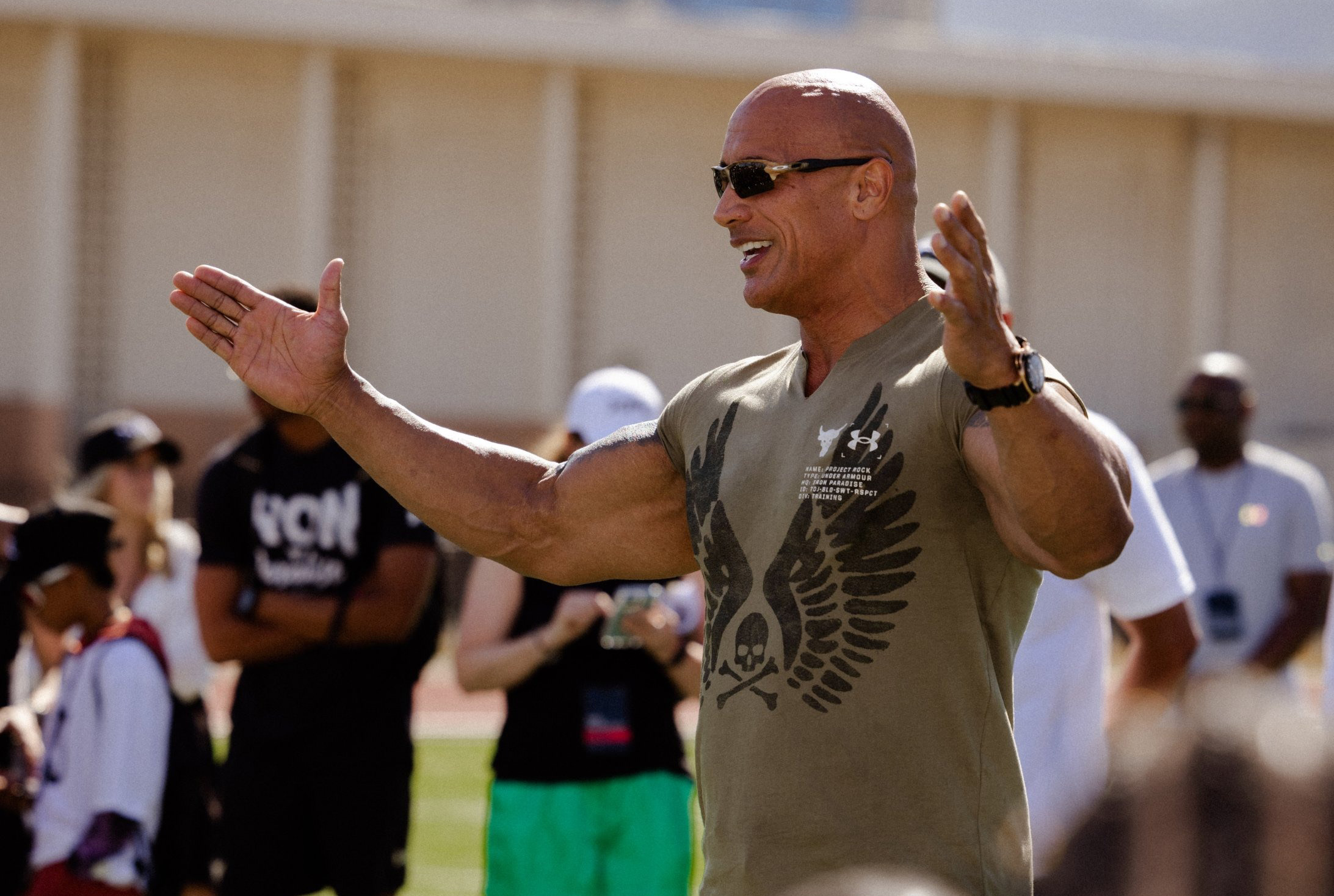 The XFL knows to bring the Rock out for certain events, especially if they want the media to show up. The XFL player showcase at McKinley High School in Honolulu, Hawaii was no different, and when Dwayne Johnson made his appearance, the media flocked to his side.

Why wouldn’t they? Johnson is a polished speaker who doesn’t use notes. He speaks off the cuff, and genuinely from the heart. In some ways a reporter’s dream.

Just like he did for the Honolulu Star-Advertiser’s Stephen Tsai who, putting three different media outlets’ microphones in front of Johnson, asked him about bringing an XFL franchise to Hawaii. “The Rock” answered masterfully. In some ways, it was like he was channeling his Ballers character “Spencer Strasmore.”

“That’s a great question. Sure. As a matter of fact we have talked about that, there’s a few things that have to happen as we stand the league up,” Johnson said. “Franchising out our league is very important to us. The expansion and growth of it. We will take it one step at a time.”

Is Hawaii in XFL’s future? pic.twitter.com/3oLd0OoCyx

Johnson didn’t only play up to the media, He also addressed the players, a group of school-aged children, and helped wrangle a wayward tent. At least during the media portion, he wore a sleeveless XFL tee-shirt emblazoned with the number “54,” a number that symbolically represents all players who never made an NFL’s 53-player roster.

Reportedly, the Showcase had over 100 players in attendance, a smaller set when compared to the 250 who attended both the Maryland and Florida showcases. In attendance were an impressive set of former University of Hawaii players including defensive backs Daniel Masilfilo, Ikem Okeke, and Quentin Fraizer, linebackers Solomon Matautia and Benetton Fonua, defensive back Pita Tonga, receiver Cedric Byrd, and quarterbacks Bryant Moniz and Cole McDonald.

Cole McDonald is a highly touted quarterback prospect for the XFL to consider. In his senior season at Sonora High School, he threw for 2,313 yards, rushing for another 1,091. He attended the University of Hawaii (2016-19), playing in 33 games and finishing his career with 8,032 passing yards and 70 touchdowns against 24 interceptions, rushing for 880 yards with 12 TDs. At the NFL Combine he ran the fastest 40-yard time among quarterbacks at 4.58 seconds and the highest vertical jump among QBs at 36 inches. In 2021 he signed with the Arizona Cardinals on February 4, but was released on June 1st. He signed with the Toronto Argonauts of the CFL and played one game on November 16, 2021 against the Edmonton Elks, completing 4 of 8 passes for 45 yards with no TDs and 1 interception.

When asked why the XFL came to Hawaii, Johnson responded, “To be able to come back, put the showcase on, help create an opportunity for local boys, something that I once was because I will always be one.”

“Just be given an opportunity to live their dream,” Johnson said.

Just as in the other Showcases, the XFL utilized BreakAway Data’s services in recording athlete’s biometric and performance data, which is made available to the athletes themselves through the BreakAway mobile app.