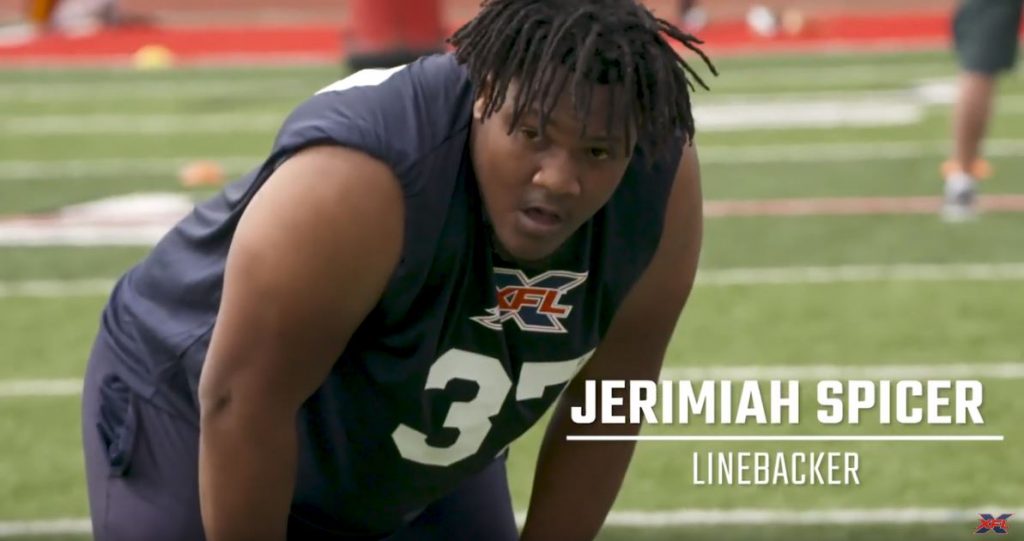 Jerimiah Spicer’s persistence got him an invite to the XFL Showcase in Los Angeles, and a feature video on the XFL web site. Now he waits to see if his persistence has paid off by getting an XFL player contract.

Jerimiah Spicer is the sports equivalent of DC’s Shazam. A lifelong orphan who was abandoned as a child, he grew up without a mother and father, and lost his grandmother as well. He was forced at a very young age to face this world all alone. Somehow, Jerimiah Spicer made his way from being homeless in Downtown LA, to skid row, to foster and group homes, and then somehow, some way, magically making his way onto a football field. Sometimes the true inspirations in life do not come from the desired destination but from the journey itself. Jerimiah Spicer’s story is an inspiration already because of his journey, more so than where the dream eventually takes him. Jerimiah’s dream is to one day be playing pro football. The football field to him has always been his one true home.

It all started out as a nightmare. Jerimiah Spicer has had to do everything the hard way. It’s been a struggle every step of the way. Spicer attended eight different high schools. Football was his salvation, but his road has had many potholes along the way. No four year college programs for him. The 6’1″ 240-pound linebacker made his way onto Riverside City College, before transferring to Bethesda University. The struggle to survive and find a purpose in his life continued for Jerimiah, as he never saw the field for Bethesda. Undrafted and unsigned after his college days ended, things looked as bleak as ever.

Thousands of college football players from good programs don’t make the NFL every year, let alone someone who has the limited playing background that Spicer had. Finally, he was able to be drafted by “Major League Football,” a fledgling upstart league that failed to launch. Jerimiah finally caught a break in 2018 and ended up playing and starring in the American Arena League with the Cape Fear Heroes. Spicer led the league in tackles and was all first team. NFL teams took notice and Spicer landed tryouts with a few NFL teams, the Chargers, Browns, Rams, Bucs, among others. Just getting to that point from where he started is magical in, and of itself.

Pro football prospect Jerimiah Spicer is the shining example of where social media can be a positive. In this day and age, there are so many college and pro football hopefuls that get overlooked and fade away into darkness. Spicer has put on his social media shoulder pads and has been playing hard from sunrise to sunrise, just to get his name out there and to realize his dream. Players from rough upbringings like Jerimiah Spicer have a hard time getting ahead and getting noticed. There are thousands of pro and college football hopefuls that simply do not have the support to get a break.

Players like Jerimiah Spicer and others have to make their own breaks and end up using the tools of social media for self promotion. It’s a long shot for most, but sometimes lightning strikes and you get lucky. Take Oakland Raiders first round running back Josh Jacobs as an example. Jacobs spent his high school years without a home and spent time sleeping in the backseat of his father’s car. A zero star recruit, Jacobs sent college football programs his game films from high school, and Alabama, of all places, took a chance on him.   If it wasn’t for Jacobs persistence, he wouldn’t have made it. He promoted himself as hard as he could,  and with a whole lot of talent, a boat load of drive and some luck, Jacobs is now in the NFL, getting ready to be a feature back for one of the most historic franchises in all of sports, the Oakland Raiders.

Despite having an agent, Jerimiah Spicer has been his own best advocate. With the XFL exclusively inviting close to 900 players at eight different player showcases. Jerimiah Spicer wasn’t one of the original invites. It didn’t slow him down. When XFL Los Angeles Team President Heather Brooks Karatz had a meet and greet with the fans a few months back. Jerimiah Spicer showed up and made his presence and support known. Within days, he had received an invite to the LA showcase. With the XFL showcases now over. Hundreds of pro football hopefuls are sitting on the sidelines waiting to see if they will be getting league contracts from the XFL. Jerimiah Spicer and his story has been featured by the XFL on social media in recent weeks. His story, drive and persistence has made everyone take notice.

I caught up with Spicer and was able to ask him some questions about his future. As he patiently waits to see if he will signed by the XFL, and added to their pool for the league’s upcoming draft in October.

Has the XFL been in touch with you or your agent since you worked out for them at The LA Summer Showcase?

Yes, the XFL has been in contact and I ‘ve been hearing that every coach in the league likes me & wants to see what I got to bring to the table just like the rest of the world. XFL did a small documentary on my life story. The XFL has been nothing but good to me. President Heather Karatz & Coach Moss showed instant love and told me it won’t be handed to me . I still got to put in that work. Just be myself and everything will workout.

Did you ever find out or ask what your test numbers at the LA Showcase were?

No, I never asked my test numbers . I really didn’t care because they don’t make me. I just do them because I have to. Those tests don’t show my instincts or the adversity I went through in life , nor my heart nor my tackling ability. Only I can beat myself in a game. The man who makes the least amount of mistakes and plays through 4 quarters relentlessly wins . It’s an attitude you have to have. I went through hell in life , can’t nothing stop me.

From your experience at The LA Showcase, How would you compare it to the NFL workouts you have received in the past?

XFL showcase was pretty much like an NFL COMBINE . 40s , 3 cone , Shuttle , broad jumps , more cone drills , then 7 on 7 and one on ones . It was very busy with over 100 athletes . That’s my first Real Combine with the XFL. I never got invited to the NFL COMBINE but I watched them all. I was at NFL facilities , and with the Chargers ,we only did Position drills it was 4 or 5 Linebackers . We didn’t run 40s or Shuttle etc,  they wanted to see if you can move Side to side , front to back and how fast can you get to the ball . Play recognition instincts and locating the ball stuff like that.

Were you able to spend some time with any of XFL LA’s coaching staff? Like Defensive Coordinator and Multiple Time Super Bowl Champion Pepper Johnson?

Yes , talked to Coach Pepper Johnson . He is a very serious person, you better be listening and not talking when he is speaking. I watched a lot of film on him before I met him so when he spoke, I knew a lot of what he was saying , when he was speaking from his experience. I have a lot to prove to the coaches cause I’m basically a NOBODY who was persistent enough to survive the storm. It still ain’t coast as clear but I see the Sun peeking through.

Speaking of former great NFL players like Pepper Johnson. Who are some of your favorite players either watching as a fan, or are there any players that you have modeled your game after?

I play like Junior Seau , Derrick Thomas, Thomas Davis , Ray Lewis and  Luke Kuechly.  I’m a ball hawk . I find the ball and get there,  and when I get there , I get there with a bad attitude.

My best Teammate ever was ZAIRE ANDERSON Linebacker , Active with Denver Broncos. We played at Riverside City College together in California . Derron Smith Safety Active with the Minnesota Vikings, we played at Banning high school together in California. Best Player I played against was Kenjon Barner . Active Running back for the Atlanta Falcons it was BANNING HIGH VS Notre Dame high school in Riverside California. That was my first time playing against a Legit Running back ,that was smart,  he would take one step instead of juking then going. It was one step go.

How would you describe yourself as a player?

I’m the hungriest dog a team can get.  I also live life with my fans.  I’m a game changer that can change a game at a moments notice. I have positive contagious energy that can help win games and fans.

You’ve done a lot of motivational speaking and a lot of self promotion. Using social media as a tool to promote yourself and your story. Have you ever considered being a counselor or mentor in your post playing career?

I do motivational speaking ,spoke to over 25,000 kids , I train kids. I did my FIRST ANNUAL SPICE IT UP Skills Camp it was a success. Motivational speaking is something I want to do for the rest of my life. I want to make it a Profession one day. Yes I will go back to foster homes , group homes and juvenile halls. To Homeless streets and speak wisdom to the ones coming up.  So I’m ready for the challenge.

Thank you to Jerimiah Spicer for his time. He’s certainly been ready for all the challenges he has faced in his life. The truth is that those challenges weren’t ready for someone like him.