The Hitmen Lose Heartbreaker To Chicago 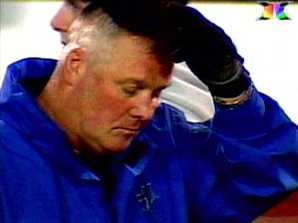 A dejected Rusty Tillman knows that this is one that the Hitmen should have won.

New York – (1 April 2001) — Nearly 30,000 fans at Giants Stadium witnessed, what was perhaps the XFL’s best game of the season. Unfortunately for the 30,000 Hitmen fans, NY came up on the short end of the eastern playoff stick.

The Chicago Enforcers (4-5) defeated The NY/NJ Hitmen (3-6) 23 to 18 in a see saw matchup between two division rivals. The lead changed hands on 5 separate occasions and by the time the game was over NY’s game and perhaps season ended at the 1 yard line.

The NY loss was costly as the Orlando Rage rallied to beat the Birmingham Bolts 29 to 24. Had New York won, they would have clinched a playoff spot. Birmingham is now eliminated from contention and destiny is out of the Hitmen’s hands and into Chicago’s.

The Hitmen are barely hanging on to their playoff lives. They will have to beat the Thunderbolts in Birmingham next Sunday afternoon, and they need the Rage to defeat the Enforcers in Chicago. If those two things happen next weekend, then the 2nd playoff spot in the East would come down to net points within the division. Both teams would have finished with a season split in the series. NY and Chicago in this scenario would both finish 2 and 4 in the division. As it stands right now, NY has a 5 point edge over Chicago in net points. Not only will the outcomes be crucial next week but so will the scores!

Rusty Tillman’s guarantee on MSNBC’s webcast did not come to fruition and even though his team’s heart was broken by Chicago he must now regroup and focus in on Birmingham.

Chicago grabbed control of their playoff destiny on Saturday Night but it wasn’t easy. John Avery suited up last night but surprisingly he wasn’t a factor even though he tried to give it a go for 3 quarters. Wally Richardson took a seat due to his ailing knee and pro rookie Corte McGuffey started at Quarterback for the Hitmen. Opening day starter Charles Puleri was on the sidelines for this one.

McGuffey made the start because the NY offense had it’s best week of practice with Corte at the helm according to Hitmen offensive coordinator, Greg Briner. McGuffey got off to a slow start in this game and went 3 and out on his first possession.

The Hitmen defense set the tone early on Chicago’s first drive when Bernard Russ sacked Kevin McDougal in the end zone for a safety. NY took the early 2-0 lead. 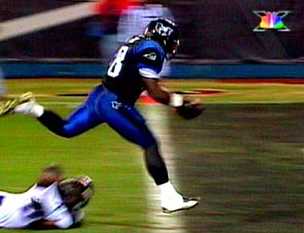 Joe Aska runs for a spectacular Hitmen TD in the first half of last night’s game.

On NY’s 2nd offensive series, Corte McGuffey was intercepted by Jayson Bray. NY had drove down to Chicago’s 36 yard line before the rookie’s first mishap of the game. The Hitmen defense held once again and forced Chicago to punt. Kirby Dar Dar set up NY nicely on their 3rd possession with a 22 yard punt return. The Hitmen started at Chicago’s 32 and 3 plays later, Joe Aska scored from 16 yards out on a run up the Enforcers gut. The score extended NY’s lead to 8 points. They failed on the extra point though but the score was NY 8 Chicago 0.

The Hitmen defense held Chicago to another 3 and out on their third possession. John Avery and Chicago’s ground game was a non factor at this point. The Hitmen offense squandered good field position and went 3 and out. This kept Chicago in the game as the first quarter came to an end. Chicago’s offense came alive on their 4th series, Kevin McDougal caught fire early in the 2nd quarter when he connected with Aaron Bailey for 30 yards on a big 3rd down conversion. Three plays later, the Enforcer ground game started to pick up as Chicago reached NY’s 12 yard line.

In one of the XFL’s funniest plays this season, John Avery crashed into Rachel the sound girl for NBC on the sidelines. The blow knocked little Rachel off her feet. In typical XFL fashion, she shrugged off the hit and was immediately interviewed on the sidelines by Fred Roggin.

It was no laughing matter for NY however when Kevin McDougal hit Luke Leverson a pretty 9 yard TD grab. The extra point failed when Kevin McDougal was clocked by Tyree Talton in a head on collision at the goal line. The score was now NY 8 Chicago 6. The drive went 85 yards in 9 plays. Chicago was back in the game.

On the Hitmen’s very first play on their next drive, Anthony Dicosmo was stripped by Ray Austin, The football was recovered by Matt Finkes at the New York 30. Five plays and 29 yards later, Chicago opted for an 18 yard field goal at the Hitmen 1. Andy Crosland connected on the kick and Chicago now had The 9-8 edge.

Butler B’ynote gave NY/NJ great field position with a 35 yard kickoff return to the Enforcer 47. McGuffey started clicking and he drove the Hitmen all the way down to the Chicago 6 yard line. A sack, a false start penalty and two incompletions later, NY settled for a 28 yard fg from Leo Araguz. NY had recaptured the lead, 11 to 9.

Only 58 seconds remained in the first half. The Hitmen let down their guard and it cost them dearly as the Chicago Enforcers led by McDougal drove 74 yards in 7 plays and it all took just 50 seconds for them to do so. A 16 yard diving touchdown catch by Luke Leverson sealed the drive and Chicago connected on it’s pat when McDougal hit Charles Wiley to give Chicago a 16 to 11 lead at the half. The 5 point lead would become the margin of victory when all was said and done.

Chicago received the football to start the second half and they drove down to NY’s 30 yard line. Up by 5 and facing a 4th and 3, Ron Meyer opted to go for a first down instead of attempting a 47 yard field goal. The decision would prove costly as the Enforcers were hit with a “Hurricane”. Joey Eloms stepped in front of a drag route and intercepted Kevin McDougal. He then proceeded to return the interception 76 yards for a touchdown. Giants Stadium erupted as NY now had the lead. The Hitmen converted the pat when McGuffey hit a wide open Ryan Collins. The score was now NY 18 Chicago 16.

The Enforcers though were not fazed as Corey Ivy brought back the ensuing kickoff 45 yards to set up Chicago’s offense in great field position. The Hitmen defense bended once again but they didn’t break as Damen Wheeler picked off Kevin McDougal at the NY 20 yard line. McDougal took a bruising blindside hit from Vernon Crawford. The hit took McDougal out of the game and John Avery was now also out. Two time controlling drives were thwarted by Chicago turnovers and NY had the chance to put Chicago away but their offense went 3 and out and was forced to punt yet again.

The Enforcers took over at their own 34 and once again with Craig Whelihan now in the game at Quarterback, Chicago had another time consuming drive that took the game into the 4th quarter. Chicago drove all the way down to the Hitmen’s 12 yard line. Leshon Johnson who ran for over 100 yards in Avery’s place rumbled down to the NY 2 but was dislodged of the football by Tyree Talton who picked up the fumble. Once again, NY’s defense had stepped up big time.

NY’s offense struggled to generate offense and were once again forced to punt. 7:35 remained in the game, Chicago’s offense also stalled and they were forced to punt with just over 5 minutes remaining. The Hitmen took over at their own 15 and began to milk the clock with Joe Aska (80 yards rushing). With under 3 minutes left, on 2nd and 9 from their own 29, Aska broke free with a 13 yard first down run but disaster struck as Joe was stripped of the football, which was then recovered by Quincy Coleman.

With just over 2:20 left, Chicago took over on NY’s 43 yard line. Kevin Mcdougal was now back in the game. He delivered. The hero for NY, Joey Eloms quickly became the goat when he was flagged for interference. The costly mistake put Chicago in field goal range at the NY 21 yard line. Chicago only trailed by two.

Two plays later, with the clock ticking and the Hitmen showing an 8 man front to stop the run, Chicago called a play action and it left NY defenders frozen, as McDougal hit a wide open Willy Tate for the go-ahead score. The pat was converted by Leshon Johnson and the score was now Chicago 23 NY 18.

It was last call for The Hitmen as they started at their own 39 yard line with just 1:34 remaining. Two weeks ago, NY was faced with a similar situation as Wally Richardson drove NY late to beat the Maniax in comeback fashion by 1 point. Well the pressure was now on Corte McGuffey. Corte started making some big league passes, first a 15 yard completion to Kirby Dar Dar, then a beautiful 30 yard strike to Anthony Dicosmo. Clock ticking, another completion to Dar Dar and now the Hitmen were staring at 3rd and 1 from the Chicago 6 yard line. Six yards away from clinching a playoff spot. The drive stalled when the Hitmen were called for holding on 3rd down. Then an incompletion by Corte who crossed the line of scrimmage, the Hitmen lost the down and another 5 yards which put them at 4th and 15 now from the 20. No timeouts left, the Hitmen needed 6 points and they only had 6 seconds left in the game. Mcguffey dropped back and fired over the middle, The pass was intended for Dicosmo but it ended up in the hands of Chicago Linebacker Casey Dailey at the 1 yard line. Chicago wins 23 to 18.

Game over for the Hitmen, playoff hopes over? Not quite but close. Kevin McDougal is the obvious MVP of this game. He threw for 193 yards and 3td’s. His lights were knocked out and he returned and shined the brightest in this game.

For the critics of the XFL, I defy you to sit down and watch this game and tell me that this league is somehow “bogus” or “horrible”.

XFL Week 9: Enforcers Win the Marathon
The Final Week For The Hitmen?