The future of sports TV rights fees, and how it could affect the XFL

Massive television contracts come at a time when television ratings are down nearly across the board. How will XFL 3.0 fair? 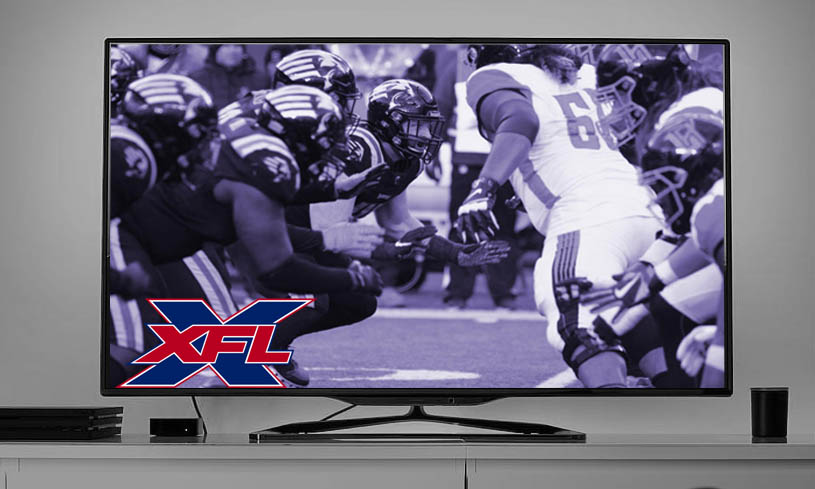 Massive television contracts come at a time when television ratings are down nearly across the board. How will XFL 3.0 fair?

Regarding sports rights fees with declining ratings, fewer homes getting cable, but greater expenses, there are reports that FOX is offering an 85 percent increase to $2 billion per year for its next NFL deal that expires at the end of the 2022 season. When it comes to cable these days, the key revenue driver is carriage fees. Those aren’t determined by ratings, or even 18-49 ratings, but based on what cable systems feel is their importance. Basically the key is sports content that people in local markets feel they need, which is the NFL, NBA, big college football, college basketball, baseball and in particular the local teams, and maybe hockey and NASCAR. It’s been noted that TBS, even though baseball doesn’t draw big ratings, would take a big hit on carriage fees without it…The feeling is that with the increases in things like sports betting and tying into it, the value of sports in the long run will increase as ratings fall…However, the bad part of this is that the major sports are considered safe, but there is fear that with so much going to those sports stations feel they need to have, there may not be money left over for niche sports…”

While the NFL is apparently cashing in once again on their next contract, Major League Baseball just re-upped with TBS for $3.75 billion, which comes out to about $535 million per year. That’s an increase of 65% over its previous deal with Turner.

These financial increases come at a time when sports ratings are down nearly across the board in 2020. This chart from SportsMediaWatch.com tells the story: 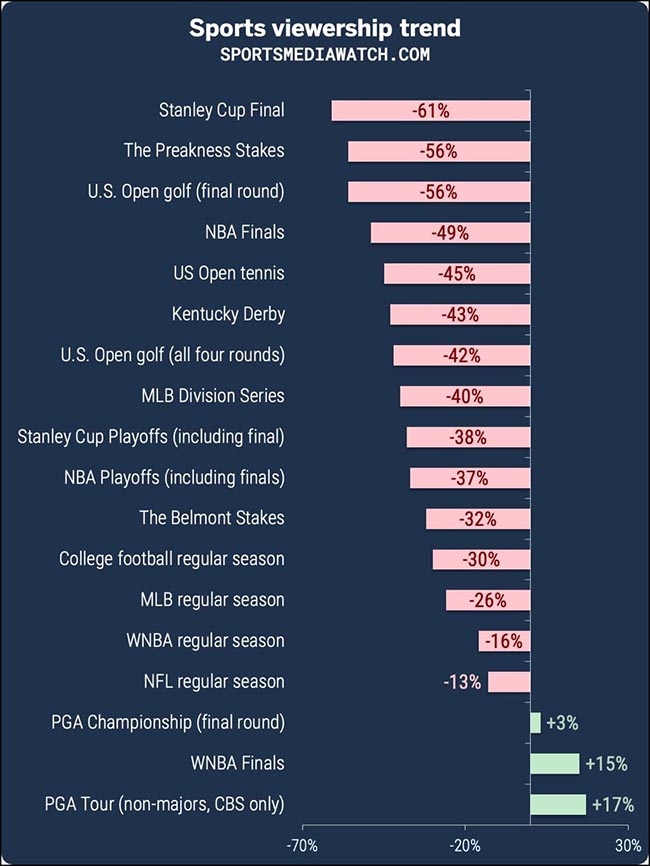 Some are quick to blame sports leagues embracing social justice initiatives as a reason for the downturn, but the NHL’s Stanley Cup Finals, horse racing, and golf are down the most by percentage, and those sports are not known for their progressive movements. In fact, women’s basketball has been ahead of the curve when it comes to its players speaking out, yet the WNBA is one of the few sports in which ratings are up.

Numerous reasons have been given for the lower ratings this year. Anthem protests and social justice expression is certainly valid to a point. But it’s more complicated than that. It’s possible the pandemic has left people caring less about sports; perhaps the lack of crowds at these events have made them less of a television event for viewers. In a presidential election year, news coverage and debates have no doubt cut into ratings as well.

The survival of XFL 3.0, like its predecessor, will be dependent upon a long-term paying television deal. Vince McMahon saw how much Fox and the USA Network were willing to pay to air WWE programming; he also saw that the bubble had yet to burst on rights fees for other sports. The XFL’s return was McMahon’s attempt to capitalize on the networks shelling out big bucks for sports properties.

He knew that it would take hundreds of millions of dollars of his own money to spend on the league before he could cash in, and was prepared to spend that much over the course of three years prior to the coronavirus pandemic stopping that plan in its tracks. After all, what’s a couple hundred million when, if all went well, you’d be able to make that much back and then some over the long-term?

Despite how much has changed in sports over the last several months, one constant is that for the XFL to survive, it will have to get a well-paying television deal. Dany Garcia and Dwayne Johnson know that, and unlike McMahon, are looking for one right off the bat – they’re unlikely to be willing to spend as much as McMahon had planned to make it work.

The good news for the XFL is that not even the pandemic has caused the sports rights fees bubble to burst. Leagues are still raking in money hand-over-fist on TV deals. The other good news is the tie-in to sports betting, which the XFL was up front about in 2020, more so than any other major professional sports league has been. The leagues that embrace that avenue the most could benefit greatly from increased interest.

The bad news is, as Meltzer notes, it’s the major sports properties that are the ones cashing in. Established leagues like the NFL and MLB are seeing the increased profits. They are prestige programming when it comes to athletics. The XFL is not that. It is not an established property with a large built-in fanbase and a history of success. Garcia and Johnson’s decision to restart the league in 2022 gives them significant lead time to get a paying deal done and to really scour the marketplace and sell themselves, but it remains to be seen if any network will bite.

Another key piece from the Observer: While most fans look at ratings in terms of networks being able to sell ads during games, it has become more about the ability for those networks to rake in exorbitant carriage fees from the cable providers. With more and more people cutting the cord, live sports has become the main selling point for cable companies. Therefore, networks like ESPN, FS1, and others, are able to jack up their prices for carriage on those systems.

How does this benefit the XFL? Again, it may not. Live sports will always be desired, but enough for a network to pay the league for the right to air the games? New XFL owners, Dwayne Johnson and Dany Garcia will have to do a world-class sell-job to get a network to buy in; given their experience selling entertainment properties to networks, I wouldn’t rule out that possibility. While the bubble hasn’t yet burst on sports rights fees, given the “who” and the “why” of the big money being thrown around, it seems unlikely the XFL will be able to take advantage, at least in the short-term.