The case for officiating controversy – but at what cost?

Should the XFL be trying to avoid the pitfalls the NFL has experienced with its officiating, or should they consider the benefits of the controversies the NFL has found itself in? 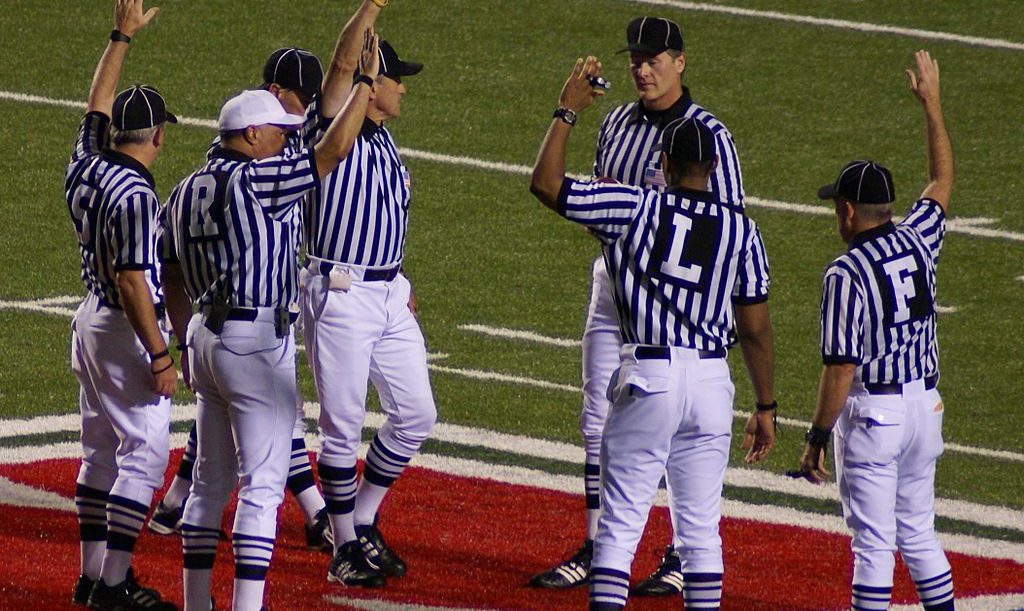 The 2019 NFL season is only two weeks old and yet again, on-field officiating and penalties have become a major storyline for the league. In week one, there was a clock issue that cost the New Orleans Saints about 15 seconds as they were driving down the field before the half. Unlike the NFC Championship Game in January, they were able to overcome the blown call thanks to a last-second Wil Lutz 58-yard field goal.

The Saints were victimized again in week two, this time by a premature whistle. A Jared Goff fumble returned for a touchdown by Cameron Jordan was blown dead as an incomplete pass. While replay overturned the call and awarded New Orleans the ball, because the whistle blew, they would only get the ball at the spot of the recovery, and not the six points.

It’s not just the errors that are irking fans; the amount of laundry thrown during games has reached a boiling point with announcers and players as well. FOX NFL analyst and former Dallas Cowboys QB Troy Aikman in a podcast with Sports Illustrated called the amount of penalties “nauseating” and “maddening.”

Even New England Patriots QB Tom Brady, the recipient of some of the weakest roughing the passer calls in the last two decades, found Thursday night’s Jacksonville Jaguars vs. Tennessee Titans game hard to watch because of the penalties:

If it seems like there are more penalties called early this season, it’s because there have been. ESPN’s Adam Schefter Tweeted out the numbers:

Holding penalties specifically are on the rise, and it was an offseason point of emphasis as suggested by coaches. According to an NFL.com article by Judy Battista, offensive holding penalties are up 64% through the first two weeks of the season.

That’s not to mention the can of worms opened by allowing pass interference to be a reviewable play in 2019. Previously, judgment calls, of which pass interference is considered, had been immune from review. Even though “clear and obvious visual evidence” is the bar required to overturn a pass interference call (or non-call), that bar will be different depending on the set of eyes looking at it.

This all sounds bad for the league. It has slowed down the pace of play even more. It has players and coaches frustrated. It has fans running to social media even quicker than usual to voice their disgust throughout the world. Second-guessing NFL referees has become a cottage industry. You’d think at some point, the weekly officiating watch would affect the integrity of the game, but thus far, The Shield has not been pierced.

In fact, television viewership continues to grow. Week one this year was up 5% over week one of the 2018 season. Monday Night Football in particular saw double-digit percentage increases for both opening weekend games compared to last year. (Source: https://www.thewrap.com/nfl-week-1-tv-ratings/)

This is all prologue to the XFL, which has pledged a faster pace and fewer stoppages. It has also promised inventive rule changes, some of which we may be hearing about soon. We are now at about the time where the XFL should be writing its rulebook in pen. It’s not known whether the league will release its full rules upon completion, but if so, that could happen any day. It may be the next big reveal for the league, which also has the XFL Draft approaching next month.

While common sense would tell you the XFL should be trying to avoid the pitfalls the NFL has experienced with its officiating over the last decade or so, one has to consider the benefits of the controversies the NFL has found itself embroiled in with regards to this subject.

The disputed calls and no-calls have created storylines for the league and its teams beyond the box scores and win-loss columns. It has fed the talk-radio crowd and kept those issues in the news cycle for days. The more content you give fans and analysts to discuss, the less likely they will be to move on to another subject or sport. The NFL is king, even when the emperor is naked.

If there’s one thing the XFL needs, it’s to be in the consciousness of the sports fans as much as possible when the games begin. Fans are hungry not just for acceptable levels of on-field play, but also for controversy. The league tried to manufacture that in 2001 with the feud between New York/New Jersey Hitmen head coach Rusty Tillman and NBC color analyst Jesse Ventura, but fans didn’t buy it.

With new rules expected to be in place, there may be an adjustment period for players and referees when it comes to what happens between the lines. That could bring along with it some questionable calls from the officials. It’ll also be interesting to see what type of replay review, if any, the league settles on.

The XFL may not get the benefit of the doubt that the NFL has. Despite complaints by fans of how the NFL has become over-officiated, they keep showing up at stadiums and watching on TV. Will fans look the other way if roughing-the-passer penalties in the XFL are questionable, or if a quick whistle or two negate defensive touchdowns? Or will they use that as evidence that the XFL is not a quality product and decide it’s not worth their time?

As the XFL puts the finishing touches on its rulebook, one that will have a great influence on the success of the league, you have to wonder if there’s a devil sitting on the shoulder of commissioner Oliver Luck, telling him to keep some of the rules vague enough so that the XFL too can benefit from a little bit of officiating controversy, just as the NFL has.