The Alliance between Dick Ebersol and Vince McMahon 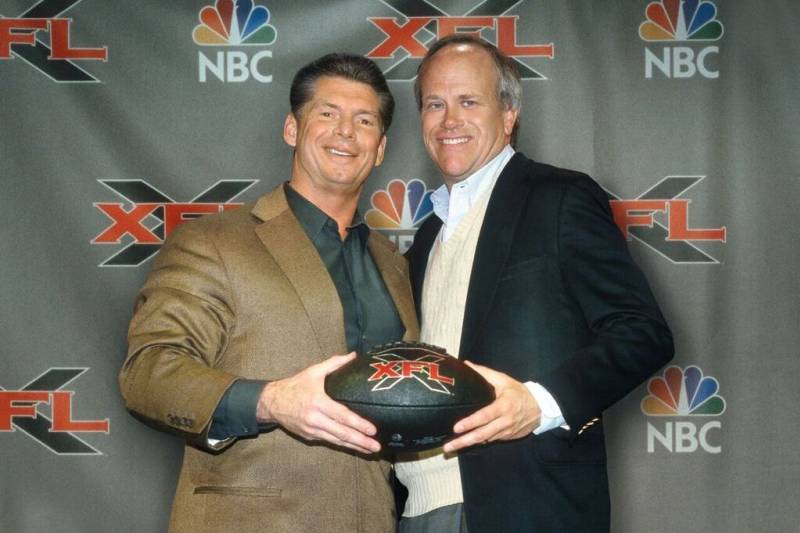 Vince McMahon and Dick Ebersol – Credit: ESPN Films.”Do you ever have any thoughts of trying again?” Dick Ebersol asked Vince McMahon on the This was the XFL special done for the ESPN 30 for 30 series. Vince McMahon without hesitation responded, “Yes I do.” Ebersol responded with, “We’ll have to do it with our own money because I don’t work at NBC anymore.”

To borrow a line from the critically acclaimed 30 for 30 series. “What if I told you… that in May of 2001 when the XFL folded, that both McMahon and the Ebersols would be back in the football league business 18 years later, but this time as competitors.”

TV and Sports Broadcasting Legend Dick Ebersol, once called Vince McMahon. “The greatest partner he has ever had.” The relationship went beyond just business and mutual respect. Dick Ebersol told his wife that if anything were to happen to him. He wanted Vince McMahon to be the legal guardian and watch over his three children, Teddy, Willie and Charlie. There’s no greater testament of love for someone than entrusting them with that honor.

On February 3rd of 2000, Vince McMahon announced the launch of the XFL. A bold move in a series of risk-taking moves throughout his legendary career. McMahon embarked upon creating a football league from scratch with no outside financial backing. He gave himself only a year to do it. Over a month later, Dick Ebersol and Vince McMahon called a joint press conference on March 31st 2000, to announce a 50-50 partnership with NBC as it’s broadcast machine. NBC was contracted to pay the XFL 50-million dollars per season.

From an innovation and broadcasting standpoint, this was a lethal combination. The XFL and NBC, through the vision of Vince McMahon and Dick Ebersol, changed the way football was broadcasted forever. From the overhead “X Cam”, to the on field “Bubba Cam”, to the on-field audio access of players and coaches. Dick Ebersol and Vince McMahon revolutionized the game. Unfortunately, while the presentation was way ahead of its time. The actual football was way behind. Everyone knows how the story ended for the original XFL.

While the original XFL started off great, selling millions of tickets, and drawing astronomical ratings that actually beat the World Series that year, the league fumbled the ball on the football side of things. By the end of season one, the league had become an afterthought and laughing stock in the sports and television industry. Vince McMahon still wanted to forge on to year two. NBC didn’t. The hardest decision, Dick Ebersol ever had to make was to sever ties with what was a failing operation. He needed to convince McMahon not to fight it.

Vince McMahon was left holding the bag. He could have very easily held NBC’s feet to the fire. NBC was morally and legally obligated to honor their contract with the XFL. They owed the league 50 million dollars for year two. If Vince McMahon and Dick Ebersol were just merely business partners, things could have gotten real ugly. McMahon could have and would have won any legal battles for what NBC owed him and his league.

To be fair, Ebersol and NBC weren’t alone in trying to end the XFL. The league’s top advertisers had bailed, and their other broadcasting partners like UPN/TNN, were hedging their bets and trying to leverage the XFL’s failings towards creating a stronger foothold on McMahon’s WWE. A singular grand vision that Vince McMahon planned to start and operate on his own, had been taken down by his broadcast marriages. McMahon reluctantly and begrudgingly waved the white flag.

Nearly 17 years after all of this, Vince McMahon decided that he was going to try it again, but this time. He would do it alone. No more 50-50 partners. He would be investing his own money, like Ebersol suggested, to the tune of half a billion dollars. It could be argued that this was an even bolder decision than the original XFL. McMahon was rebooting something that failed on a grand scale. The norm in entertainment is to reboot successful entities. Couple that with the fact that since May of 2001, other leagues had also come and gone, facing the same demise. Even the almighty NFL’s Europe league had died despite great financial backing. Other pro league hopefuls either failed to launch, or couldn’t survive like the United Football League.

McMahon was bringing back the XFL to a market place that had been deemed a dead zone. Why would anyone make another attempt at starting a pro football league? No one could have predicted that two months after McMahon’s January 25th relaunch announcement, that yet another spring pro football league would launch. The kicker? It was being founded by Dick Ebersol’s son Charlie. The league would be potentially going head to head with the XFL, with Dick’s son Charlie deciding to jump ahead and launch earlier than McMahon.

The XFL’s rise and fall had been documented by Charlie Ebersol, he often times would argue in defense of the league and would discuss how things could have worked, if handled differently. His admiration and the relationship between his father and Vince McMahon was a strong aspect of the 30 for 30 special. Many would argue and speculate that the XFL was reborn as a result of this special, but the special would also give birth to Charlie’s “Alliance of American Football.” A strange dynamic where Dick Ebersol would be a low-key advisor behind the scenes for his son’s league, that is now a direct competitor with Vince McMahon.

In two weeks, Charlie Ebersol is launching an 8-team spring pro-football league, with the help of NFL Hall of Fame Executive Bill Polian. The league like the original XFL, has been rushing into the market place. Giving themselves less than a year to launch. Despite taking a non-adversarial approach to the NFL, and suggesting that they could become a minor league for them. The AAF has taken a similar path to the original XFL. The league is finishing up a month-long joint training camp in San Antonio. One of the biggest failings of the original XFL, was how the quality of play suffered from teams having only 30 days to gel.

The AAF had a league wide QB draft in late November with designated quarterbacks switching teams just 2 months before game time. On their journey to opening, the league has lost a head coach in Brad Childress, three offensive coordinators in Jon Kitna, Hal Mumme and Hugh Freeze, and Birmingham assistant RB coach Cadillac Williams. Not a great start on the journey to providing quality football right out the gate. Like the original XFL, making a first impression will be key. Is Charlie’s league following the same exact flawed path that his father and Vince did?

The Alliance has some good business relationships. By comparison to the original XFL-NBC deal, the AAF has a scaled down network deal with CBS that sees just two of their games broadcast on network television. With all the other games on cable TV. Still a good deal for an upstart league. 2019 can provide so many more opportunities than 2001 did for an upstart league. From technology to gambling to fantasy football. As of this article, the AAF hasn’t launched any apps tied in to any of these aspects. The league website has not updated team or player bios but there is still time. There figures to be more promotion with the upcoming Superbowl on CBS, AAF’s current broadcast partner, with NFL Network rumored to be next on deck.

Both the AAF and XFL have stated that they are not direct competitors with the NFL, and that they’re just trying to present quality football for fans, when the college and NFL seasons have ended. Vince McMahon, learning through his mistakes of rushing into the league the first time, had decided to take a “slow and steady wins the race” approach, not launching until February of 2020. That strategy left the door open for someone to cut in front of him on the line. Little did he know that it would be his most trusted business partner’s son. Since Vince’s XFL relaunch announcement, leagues are coming out of the wood work and thin air to announce potential launches. The crazy idea of launching another pro football league is not so crazy anymore. Even Ricky Williams has emerged from a cloud of smoke to announce his own league.

The relationship between Dick Ebersol and Vince McMahon has led many to speculate, as to whether there could be yet another alliance between the Ebersols and McMahons. Despite Bill Polian’s desired goal of being a developmental league for the NFL, could the XFL and AAF eventually become partners in a joint league? Similar to the days of the 1960’s AFL/NFL merger. Supporting this theory is the fact that both leagues are in 16 different markets, with the AAF concentrated towards one side of the map, while the XFL is positioned strongly in big markets and on the east coast. The leagues aren’t competing with each other in the same markets. However, when it comes to players and coaches, the two leagues will end up competing directly with one another during the course of this year. The structure of the AAF’s 3-year contract is designed to directly prevent any of their players from playing in the XFL. Vince McMahon’s league will not have similar 3-year deals but they are offering their players more money to play in their league.

The pipe dream of a merger or joint partnership between the XFL and AAF remains a long shot, but it will exist until one or both leagues fold. The two leagues have to get to years two and three before any of these dreams can become a reality. In the meantime, the XFL is set to announce their own broadcast rights package in the coming week. They will be sitting on the sidelines, watching the AAF launch a week after the Superbowl. Will the AAF’s success or failure benefit the XFL?. There are arguments for either side. Regardless of what happens, the XFL is moving towards their 2020 launch. Where presumably, both leagues will be competing directly for attention in February of next year. Until then, Charlie Ebersol and the AAF has the game all to themselves.

As the original old saying goes, “Those who cannot remember the past are condemned to repeat it.” Both the XFL and AAF are trying to learn from the mistakes of the original XFL’s past. The Ebersols and McMahon have a shared past, and now a shared future, but they are on opposite sides of the war…. for now.

One Last Look Back at the Original XFL
Fan Choice: Vote on XFL Team Names