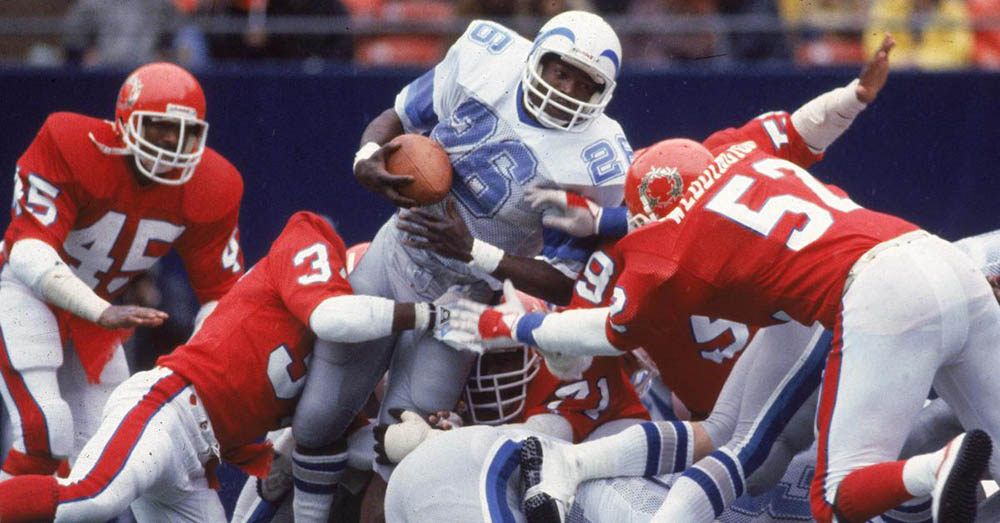 Many football fans still think fondly of the USFL and what it represented, mainly because it stood out from the crowd and built a strong identity. No other non-NFL football league has been able to do this.

Oliver Luck and others associated with the 2020 version of the XFL have gone out of their way to tell anyone who will listen, that they are not going to be like the original league. It’s been the league’s biggest selling point to all their naysayers and critics. Oliver Luck has let everyone know what he thought of the original XFL, and his opinion of the league is not very favorable. Most importantly, he let league owner Vince McMahon know what he thought when he was interviewed for the CEO/Commissioner job this past summer. His straight forward take on the league helped him land the job.

Gone from the new version of the XFL is the wrestling themed theatrics, the sexed-up cheerleaders, the glorified violence, and the politically incorrect themed team and player names. The emphasis this go around is all about football. That’s Oliver Luck and his team’s vision. Vince McMahon’s vision for the league is to be ahead of the curve and innovative, without insulting the intelligence of football fans. McMahon has a history of being a risk taker. He’s gambling hundreds of millions of dollars on Oliver Luck’s vision for the league. In fact, it was reported that Vince McMahon just recently cashed out another 270-million dollars to help further support that vision.

Actions speak louder than words. The league is working double overtime to try and shake the perception of what the XFL represented back in 2001. The XFL’s friendly stance towards the NFL and NCAA, and it’s working relationship with The Spring League, show that the XFL is not trying to be an enemy of the state like the first go around. Instead they are trying to be a respected part of the football and sports community.

Oliver Luck’s vision for the league is still a work in progress, but it is starting to take shape. The XFL wants to be a hybrid of pro and college football, with a little touch of the CFL. It also aims to emulate what made the USFL great many moons ago. The new XFL has the feel of Major League Soccer. This is not by accident. Make no mistake, Oliver Luck is borrowing from the MLS model, in league structure and in its connection to communities. Luck was on the ground floor when he helped turn the Houston Dynamo into a championship franchise. He saw MLS grow and find its own niche and market place.

The XFL is clearly following the MLS model. Look no further than the XFL’s three most recent team president hires in Los Angeles, Seattle and Washington D.C. With the hiring of Heather Brooks Karatz, Ryan Gustafson and Eric Moses, the new XFL has hired three legitimate sports executives with strong local ties to their respective markets. All three have MLS backgrounds and have had success in promoting, marketing, obtaining sponsorships, and connecting with local communities.

While all this forward thinking and progression into the year 2020 is promising, there is an argument to be made that the future XFL should not completely abandon the original version of the league. For all its failings and faults, there are certain aspects of the original XFL that the 2020 version would be wise to embrace.

One of the major things the original XFL had going for itself was brand identity. You want to be a true standalone entity, and not a league that is just following along to get along. The original XFL didn’t try to be the NFL or paint itself as a minor league. It had its own personality and vibe. The league was innovative and fan-friendly. It made fans feel like they were a part of the games.

It’s one of things that attached a great writer like Jeff Pearlman to the USFL. There are so many football fans to this day, that still think so fondly of that league and what it represented. Ultimately, they failed for several reasons, but as far as standing out from the crowd and building a strong identity, they were a success. It’s why that league has such lasting power after all this time. Credit to the CFL for marking and carving out their own identity in Canada, but in the states, no football league has been able to match what the USFL represented and embodied.

Even the failed 2001 version of the XFL has fans who still look back fondly on the renegade league that was. The evidence of that is this very website, which has been a shrine to the original XFL for almost 2 decades. Way before Vince McMahon decided to bring the league back from the dead, XFLBoard has been standing over the league’s grave site, reading its eulogy for nearly two decades.

In past articles on this site. I have borrowed quotes from historic figures to help frame a story or topic. In this case, I am going to borrow from one of the great fans on XFLBoard.com’s message board, “Tank55.”  He summed up what the new XFL should be in 3 simple sentences:

Well stated! It’s why a certain segment of football fans have rooted for non-NFL leagues to make it for years. They want a league that has its own identity and that feels special and important.  Accomplishing this end game will not be easy, but it’s what the new XFL needs to strive for. Carving out its own identity will help it stand out from the crowded sports landscape. The teams, players and the outcomes of the games have to matter to the fans who follow the league. The league’s vision has to be about making fans feel attached and connected. Be your own league, not a means to an end for another league.

The XFL can realize this vision by taking what the NFL and NCAA does well and try to make it better. You take what they don’t do well and improve upon it. You present an exciting new brand of football that innovates on the field and on the broadcast level. Present the league as being something major, exciting, and on the cutting edge.

Getting the average football fan to buy into a non-NFL league by just presenting football won’t be enough to maintain and sustain an audience. You certainly won’t win people over by trying to be the NFL, or a lesser version of it. Like the USFL, the XFL needs to “tell its own story.”