Greg Parks grades the Vipers after their loss in New York. 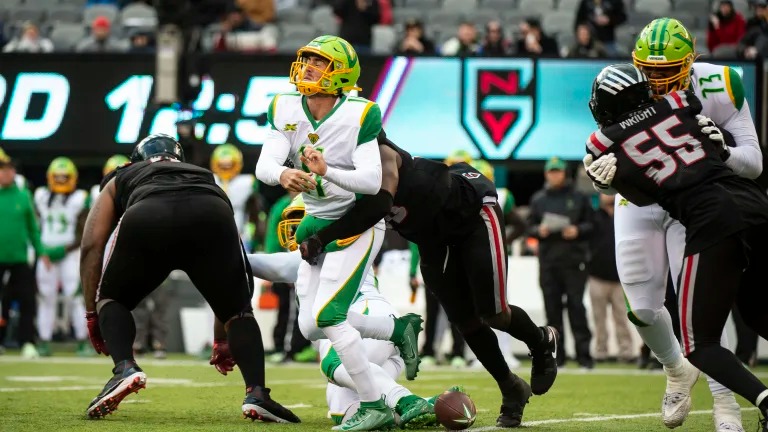 Quarterbacks: D+: I couldn’t in good conscience give the QB position an “F” because of how Aaron Murray was able to lead the offense down the field throughout the game to the tune of nearly 400 yards of offense. But there’s no doubt Murray had his issues. One of the more experienced starters in the league, Murray looked like a rookie at times, feeling phantom pressure in the pocket and escaping when there was no rush. His first interception was as poor of a decision as you’ll see, chucking the ball into the end zone off his back foot while at the six yard-line on first down. You wonder how much the foot injury that may keep him out this week affected Murray’s play.

Quinton Flowers provided a spark when he was in, but he only played one snap in the first half. Game flow may have dictated his lack of usage. He lined up at QB every play he was in except three: He lined up in the slot taking a jet sweep, then faked the sweep the two other times. If Murray doesn’t play this week, it will be interesting to see how (if?) he shares time with backup Taylor Cornelius.

Running Backs: A-: The Vipers had one of the more effective rushing attacks during the first week of the XFL season. As expected, De’Veon Smith received the bulk of the carries and averaged 4.9 yards per tote. Both Smith and Jacques Patrick, the third-down back, ran hard. Patrick dropped a pass in the throw game and was generally a non-factor there. TE Colin Thompson lined up at fullback for seven snaps, five in the first half and two in the second. The Vipers threw the ball every time Thompson lined up there.

Receivers/Tight Ends: C+: It was an inconsistent day for the receivers. Daniel Williams, the surprise of training camp, had six catches for 123 yards and emerged as an early deep threat. He converted a 4th down for a 42-yard gain in the fourth quarter. However, he also dropped two passes in the second quarter that led to a punt. Reece Horn converted a 3rd-and-12 on the first drive but then later had a goal line drop on 4th down.

Nick Truesdell had a fumble overturned by replay early in the game but replay couldn’t help him late when he fumbled and it was returned for a touchdown. He had an impressive one-handed 27-yard catch inside two minutes in the first half. His blocking was suspect at times. Backup TE DeAndre Goolsby missed the game due to injury.

Offensive Line: C: The run blocking was ahead of the pass blocking in game one. Five sacks were given up by the line, offset by the 150 rushing yards gained. LG Jerald Foster and RT Isaiah Williams both recovered fumbles that if they hadn’t, could’ve led to the score getting even more out of hand much earlier. RG Daronte Bouldin was flagged for a false start and there were a couple of other close calls.

John Yarbrough came in at center for the last drive, replacing Jordan McCray, who left with a knee injury. If McCray is out, that leaves a big hole on the offensive line. Most of the pressure given up in pass protection seemed to come up the middle. It’s not shocking that pass blocking would be an issue in the first game of a new league. We’ll see if they’ll be able to improve as they jell together.

Defensive Line: B-: This group was stretched thin when DE Jason Neill was declared inactive prior to the game due to injury, and DT Ricky Walker was ejected in the second quarter for throwing a punch at Guardians C Ian SIlberman. Prior to that, Walker seemed to get more playing time than the listed starter, Josh Banks. CeCe Jefferson started in Neill’s place but didn’t appear on the stat sheet. There were a couple times the line came close to jumping offsides trying to time the snap count. DE Bobby Richardson finally got caught in the first half.

The ends occasionally stood up to rush the passer. It was ultimately ineffective, as the Vipers didn’t register a sack and only had two QB hurries. DT Nikita Whitlock had three tackles, a tackle for loss, and a pass defended. It’s a group that desperately needs Obum Gwacham to return from injured reserve to provide a more productive pass rush.

Linebackers: B: Joining up with the defensive line, linebackers were effective at stopping the run. The Guardians had just 44 rushing yards and 2.8 yards per carry. The whole team swarmed to the ball well, a signature of Jerry Glanville’s defenses. The Vipers play nickel most of the time but when Walker was ejected, we saw more three linebacker sets to offset the lack of depth up front.

All five linebackers saw action on defense. Lucas Wacha led the group with four tackles, while Emmanuel Beal chipped in with three. Like the rest of the front seven, they were lacking in splash plays, which were needed on a night the offense failed to break through.

Defensive Backs: B-: Matt McGloin threw for just 182 yards and 6.3 yards per attempt. The broadcasters talked about how confident Glanville was in his safeties, but not so much with his corners. Anthoula Kelly stood out among them, breaking up three passes (all in the first half) and playing the ball well in the air. The Vipers start three safeties in their 4-2-5 defense. Marcelis Branch led the team with five tackles but was beaten on a 4th down conversion on the first drive.

Glanville tried to manufacture pressure by blitzing his defensive backs often, but they never got home. Shelton Lewis had rough back-to-back plays, getting toasted by MeKale McKay for a 45-yard gain, then slipping at the line of scrimmage and losing Colby Pearson on a touchdown. The defensive backs didn’t always seem to be on the same page as just before half, three of them tried to cover one player, resulting in a wide-open 32-yard gain. New York was able to hit a field goal just before the half thanks to that play. But the defensive backs played well enough to keep the Vipers within striking distance of the Guardians.

Special Teams: C+: New York returned the opening kickoff for 59 yards in what ended up being an ominous start. Third-string RB Mack Brown returned kicks on the day, while Reece Horn and Donteea Dye were the punt returners. Listed on the depth chart as a first-teamer at both of those positions, CB Rannell Hall ended up being inactive. Horn called for a couple of fair catches when it looked like he had room to run; he was replaced in the second half by Dye.
Andrew Franks missed his first field-goal attempt, a 50-yarder, but came back to connect on a chip-shot 23-yarder for Tampa’s only score. Even so, getting early points on the board with that 50-yarder could’ve given the offense a little more confidence. Jake Schum’s punts lacked distance, but the coverage team held up well. Emmanuel Beal registered two tackles on special teams.