Greg Parks’ positional grades of the Tampa Bay Vipers in their game vs. L.A. Wildcats. 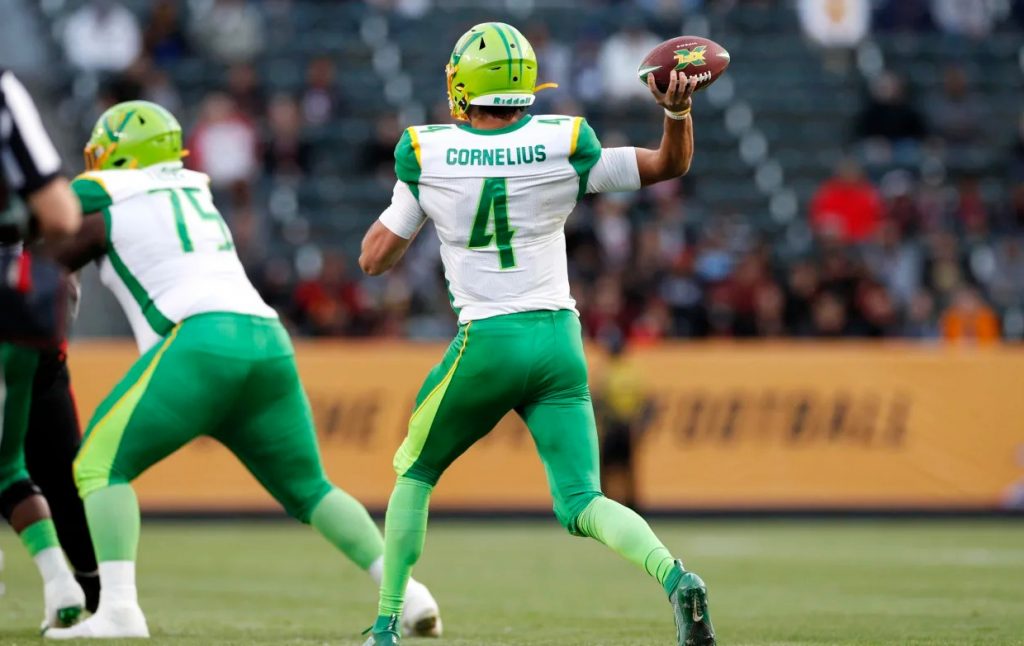 QB: D+: For the first half of the game, we continued to see the coming of age of Taylor Cornelius as the Vipers starting QB. For the second half, and especially the fourth quarter, he devolved into the guy who struggled in his first start in place of the injured Aaron Murray. Cornelius had another rushing touchdown, in the second quarter from the three yard-line, on a brilliant keeper call by offensive coordinator Jaime Elizondo. His touchdown pass later in the quarter to Jalen Tolliver was a good one: On the run, finding Tolliver in the back of the end zone. He came off as extremely confident playing with a lead. A 3rd-and-8 incompletion that should’ve been a pick-six in the third was the beginning of the downhill slide. Three turnovers in the fourth doomed Tampa’s comeback attempts, including a Cornelius sack/fumble that was returned for a TD and an interception in the end zone that ended the game. Quinton Flowers, after returning to the team, was a non-factor in the few snaps he played.

RB: C: The turning point of the game for the Vipers seemed to be when Jacques Patrick went down with a back injury. Without their two-headed rushing attack, De’Veon Smith had to carry 24 times and was not nearly as effective: He averaged just 2.9 yards per carry. It was prescient that Tampa re-signed Tarean Folston in the days before the game, but they didn’t seem to trust him to step fully into Patrick’s role, as he saw just two carries. Before getting hurt, Patrick scored from two yards out, set up by his own 24-yard run. He also converted the follow-up one-point conversion. The ineffective run game likely didn’t help Cornelius, forcing him into more obvious passing situations.

WR/TE: B-: Upon his return to the lineup after missing two games due to injury, Nick Truesdell caught a pass on the second play of the game. Unfortunately for the Vipers, he caught just one more the rest of the game. They had him lined up in an H-Back position in the backfield a few times, a look we haven’t seen much of this season. Reece Horn, Jalen Tolliver, and Dan Williams all had big games and the three starting receivers combined for 25 of the 33 targets in the pass game. Horn converted a 4th-and-3 in the first quarter and had a touchdown. Tolliver’s TD came on a great sliding catch in the back of the end zone. He averaged 23.8 yards on four receptions. Williams snagged a one-point conversion on a WR screen. It was a miscommunication on a route between DeAndre Goolsby and Cornelius that led to an interception in the end zone with under a minute remaining, sealing the Vipers’ fate.

OL: C+: Against the worst run defense in the XFL statistically speaking, the Vipers struggled to run the ball. The broadcast caught head coach Marc Trestman asking offensive coordinator Jaime Elizondo to run the ball less on first downs because of the lack of success there. In the pass game, the line allowed just one sack. According to Pro Football Focus, Jordan McCray didn’t give up a pressure in 42 pass blocking snaps from the center position. Martez Ivey had two penalties at left tackle. The line was short on depth this week with only Na’Ty Rodgers and John Yarbrough available as backups; Daronte Bouldin and Isaiah Williams, two former starters, were healthy scratches.

DL: C: With Ricky Walker inactive due to injury, Shane Bowman was up for the first time since signing and he made a few splash plays. He got good penetration (too good once; he was called for offsides) and recovered an errant shotgun snap in L.A territory. Nikita Whitlock was also flagged for offsides, but he had two tackles for loss and two hurries in addition to leading the defensive line in tackles. Production-wise, he may be playing the best of anyone on the line. Obum Gwacham played more than last week but had just one tackle. Jason Neill was called for roughing the passer in the third quarter. It appears as if Deiontrez Mount’s playing time has decreased in favor of Bobby Richardson at one end spot.

LB: C-: Running backs carried the ball just 14 times, so the linebackers didn’t have much action in the run game. They, along with the line, bottled it up whenever the Wildcats did run it. The defense did a good job swarming to the ball, which is good because there was some over-pursuit by the backers and line. Reggie Northrup had three tackles and an offsides. Terrance Plummer was hurt on a collision with L.A. fullback Winston Dimel but reentered the game later. He was beaten on a touchdown pass by the much larger De’Quan Hampton. Lucas Wacha, who relays the plays to the defense on the field, had just one tackle. Plummer and Northrup were both in on three each. L.A. had success with the tight ends in the pass game.

DB: D: While the offense stubbed their toe in the second half and couldn’t keep up with the Wildcats in terms of scoring, the defensive backs couldn’t get stops when they needed to, either. Josh Johnson threw for 288 yards and four touchdowns to lead the top passing offense in the XFL. The Vipers started off hot with Robert Priester intercepting Johnson on the first play of the game. He came off his man and read Johnson’s eyes. Priester later broke up a pass on a scramble drill, sticking with his responsibility throughout the play. It was a game to forget for Micah Hannemann, who missed an open-field tackle on Jordan Smallwood’s 54-yard gain to the one yard-line, then later was beaten deep along with Tarvarus McFadden just before halftime. The DBs defended a flea flicker well. The size advantage the Wildcats receivers had over the Vipers defensive backs seemed to play a part in their success.

ST: C+: In an effort to get Quinton Flowers into the game, he was put in as kick returner after practicing there during the week. He didn’t even reach the 20 yard-line on his lone return. Andrew Franks was good from 26 and 25 but missed short from 57 yards just prior to the half. Ryan Davis averaged less than 14 yards per kick return, often leaving the Vipers offense with a long field. Jake Schum dropped two of four punts inside the 20. The team was penalized for a block in the back on a punt return. Special teams created a turnover, with Emmanuel Beal recovering a fumble forced by Micah Hanneman deep in L.A. territory, leading to a touchdown for Tampa. Obum Gwacham made his mark on coverage teams again, leading the way with three tackles.

Defenders get back in win column at home
A New Stadium for the LA Wildcats?