With the XFL Draft now in the rear-view mirror, let’s take a look at how the Tampa Bay Vipers fared in each phase of the draft.

With the XFL Draft now in the rear-view mirror, let’s take a look at how the Tampa Bay Vipers fared in each phase of the draft. 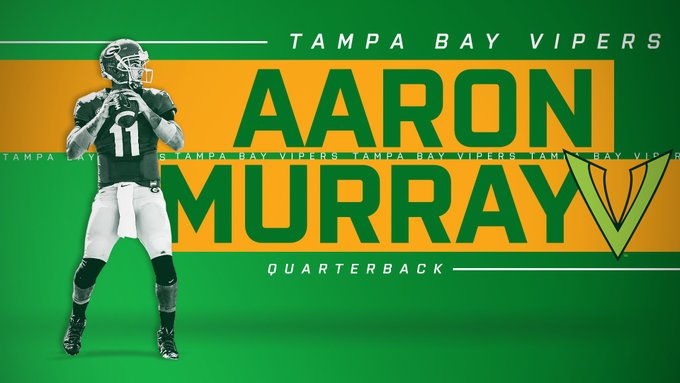 A Tampa native, Murray was the first player with Florida ties, but certainly not the last, to become a Viper over the two-day draft period. While many assigned QBs had long been linked to the XFL, Murray was one that came out of left field. After a prolific college career in the SEC where he threw for 121 touchdowns and just 41 interceptions, Murray was selected by the Kansas City Chiefs in the 5th round of the 2014 NFL Draft.

A backup who bounced around practice squads, Murray found himself out of the league in 2017. He resurfaced with the Alliance of American Football earlier this year, playing for the Atlanta Legends. Murray’s strengths are his accuracy and his ability to move in the pocket, taking off as a runner when necessary. Head Coach Marc Trestman runs a version of the West Coast Offense, where Murray’s lack of arm strength can be hidden and his smarts can be utilized. Despite being a Tier 1 quarterback, I don’t believe he’ll be handed the job in camp and will have to fend off challenges from Taylor Cornelius and Vinny Testaverde Jr. 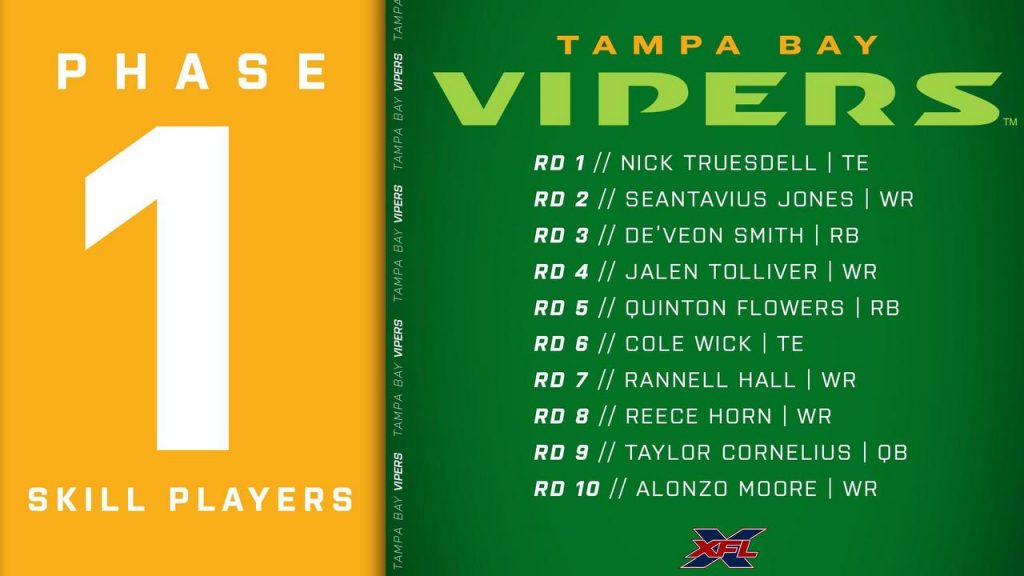 If fortune favors the bold, the Vipers will be set up for a strong first season in the XFL. With the fifth overall pick in the round, Tampa made the first surprise of the day in picking TE Nick Truesdell. He was the first tight end selected, and the second one wasn’t chosen until pick 26. You could say Tampa pounced on the best tight end in the draft; you could also say that, because of the snake format, they had to wait until pick 12 to make their next choice, limiting their options of the top wideouts and backs.

Truesdell was on-and-off the New York Jets camp roster this summer after blowing up the AAF and leading all tight ends in receiving. He has taken a circuitous route to get to this point, with stops in the Indoor Football League and Arena Football League. He was one of two TEs taken by the Vipers in this phase, joined by Cole Wick out of Incarnate Word. Truesdell goes 6’5″ while Wick stands 6’6″.

Just ahead of Truesdell in AAF receiving was Seantavius Jones, who was Tampa’s second pick. Jones goes 6’4″, so whatever QB wins the training camp battle will have some big bodies to throw to. He was a part of a WR-rich New Orleans Saints team in 2014 and 2015. Four other receivers were taken during this phase, none under 6’0″. Given the picks here, it was clear this staff wasn’t going to be mesmerized by big names or big schools, as they took several under-the-radar players from small schools.

Rounding out the phase were two running backs and a quarterback. Not every team took a second QB in this phase, and while Cornelius was picked later (ninth round out of ten), he’s younger than Murray and could present a camp challenge in his first year as a pro. At 6’6″ and 232 pounds, the former walk-on from Oklahoma State won’t be overwhelmed by the competition. The running back selections were interesting. De’Veon Smith is a big back whose slow 40-yard dash time (4.85) at the 2017 NFL Combine likely led to his undrafted status. He’s almost exclusively an early-down runner.

He’ll be paired with Quinton Flowers, who played his college games at Raymond James Stadium, where the Vipers will call home. Flowers was a college QB who could be for the Vipers what Taysom Hill is for the Saints. If nothing else, he provides a contrast to what Smith brings to the table out of the backfield. 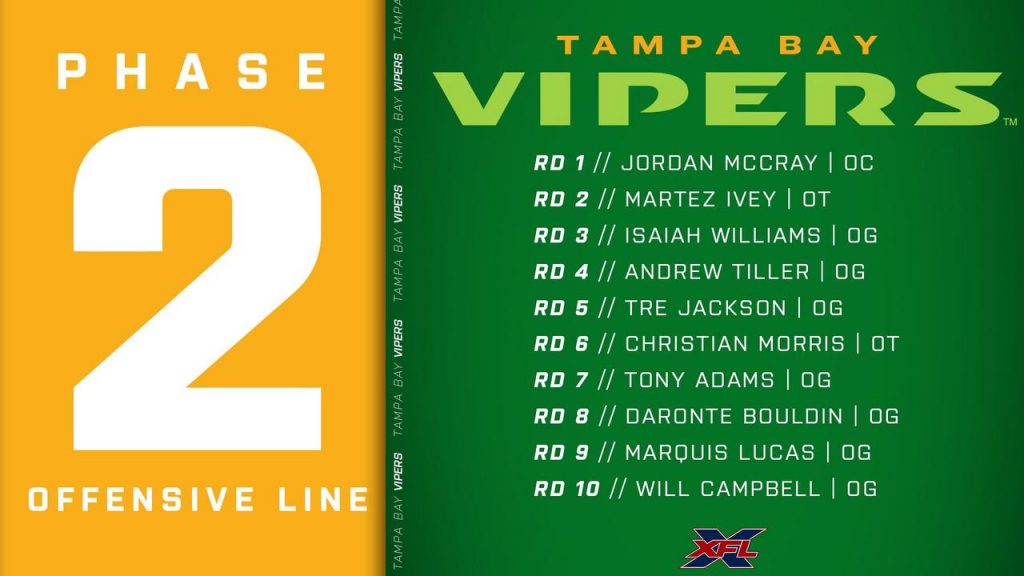 Twelve of the first thirteen overall picks of this phase were offensive tackles. I’ll give you one guess as to what team bucked that trend. Yes, it was the Vipers, who selected UCF center Jordan McCray with the fourth overall pick. The same pros and cons of picking a TE over WR and RB also apply here. This was not a draft deep at the pivot, so McCray will anchor the line from the middle.

Tampa clearly scouted the AAF hard, as McCray participated there and has been in a number of NFL camps since 2014. That gives him experience in different types of offenses. The second pick may be their most intriguing, as the Vipers took OT Martez Ivey out of Florida (one of 15 players with Florida ties drafted by this franchise). Ivey was a heralded five-star recruit out of high-school who never developed into a top-tier tackle in college.

Offensive line coach Jonathan Himebauch will have a big piece of clay to mold during camp to get Ivey to where he needs to be for this team to be successful. Worth noting that Tampa took seven guards and just two tackles, so the expectation could be that those two tackles will bookend the line. If that’s the case, Ivey will be joined by Christian Morris from Mississippi. Some of the guards may be able to cross-train at tackle.

Andrew Tiller is a former sixth-round pick of the Saints and has 28 NFL games played to his name. Tre Jackson was a fourth-round pick of the New England Patriots in 2015. This doesn’t strike me as a strong group; there are players with substantial upside but who have underachieved or don’t have much experience. Then again, that may be symptomatic of the offensive line pool available. 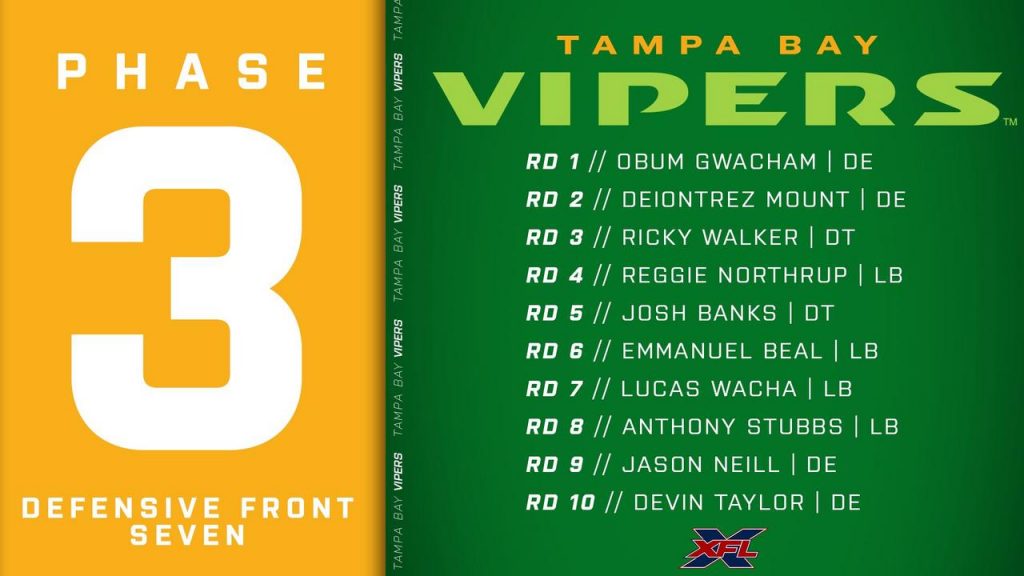 Of the ten picks in this phase, four were defensive ends, two were defensive tackles, and four were linebackers. With the first pick in the phase, Tampa Bay this time went with the conventional wisdom, taking Oregon State pass rusher Obum Gwacham. Gwacham may not make it to mini-camp in December, as he has been on the NFL workout loop since being released by the Indianapolis Colts in final cuts. He tried out as recently as October 8 with the Colts.

Gwacham is an explosive athlete and a former WR, so he’s still learning the nuances of the defensive end position. He can play end or linebacker depending on coordinator Jerry Glanville’s scheme. That flexibility will be an advantage. Deiontrez Mount, Tampa’s second pick in this phase, has similar positional flexibility. A former Tennessee Titans draft pick, Mount, also like Gwacham, has NFL game experience. He’s more of a strength player who can run defend, posing as a compliment to Gwacham’s pass-rushing prowess.

Ricky Walker was a strong undrafted free-agent out of Virginia Tech this past year. He’ll work in the defensive tackle rotation with Josh Banks, who’s a little more stout than Walker. The Vipers posted a neat video of LB Lucas Wacha revealing his destination to the high-school football team he’s coaching:

.@Lucas_wacha12 got quite a celebration after getting that “you’ve been drafted” call 📞

The one other name that stands out from this group is the final choice, DE Devin Taylor. He was a fourth-round pick of the Detroit Lions in 2013 and has 63 NFL games to his name. He also, you guessed it, played in the AAF in the spring. 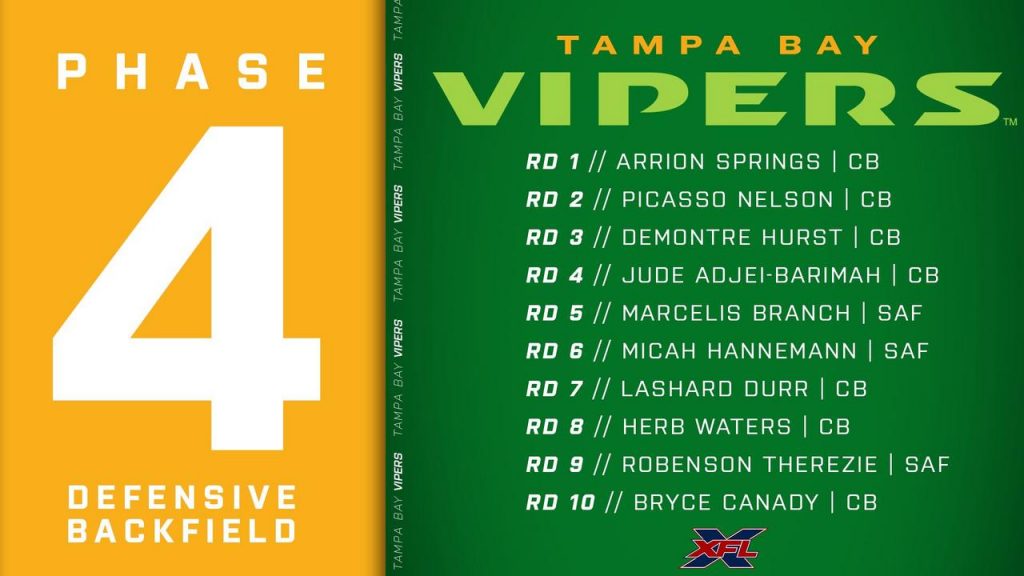 Seven corners and three safeties were the count for this phase of the draft. First-and-second-round picks Arrion Springs and Picasso Nelson are young and inexperienced at the pro level, which makes the selection of Demontre Hurst in the third round all the more valuable. He has seven years as a pro under his belt, most of those years with the Chicago Bears, though he recently was in the CFL.

Springs had been a starter since his sophomore year at Oregon and can play inside or outside. Nelson was signed as an undrafted free agent out of Southern Mississippi by the Jacksonville Jaguars, but was never a real threat to crack their once-deep defensive backfield.

Micah Hannemann and Marcelis Branch are the top two safeties, but the final safety pick may be the most recognizable: Robenson Therezie out of Auburn, who made the Atlanta Falcons as an undrafted free-agent in 2015 and has played in 25 games.

This is another position where the Vipers chose youth over some of their more veteran counterparts. 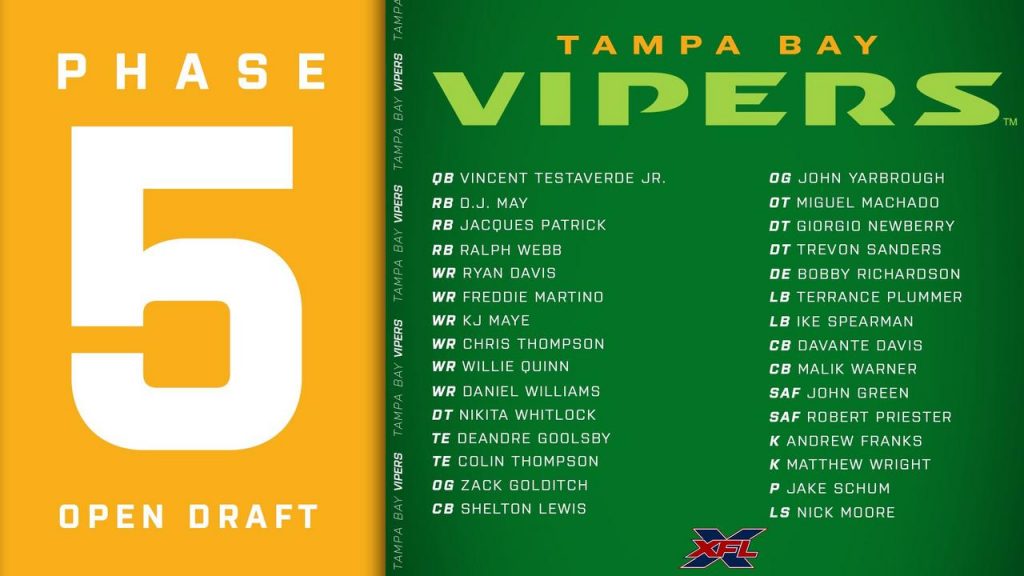 While some teams didn’t even draft specialists, Tampa Bay stocked up. They took two kickers, a punter, and a long-snapper. Andrew Franks was their first kicker taken. He spent two years with the Miami Dolphins where he connected on 78.4% of his field goals. At punter, the Vipers went with Jacob Schum who, like Franks, legged out two years in the NFL. Schum averaged 42.6 yards per punt with a 38.5 net with the Tampa Bay Buccaneers in 2015 and the Green Bay Packers in 2016. Long snapper Nick Moore was in camp with the Saints this year. He was rated by many as one of the top snappers to enter the NFL Draft this past spring.

A second kicker, Matthew Wright of UCF, was also chosen. Like at the QB spot, it doesn’t hurt to have a little competition, especially when you’re either picking your 10th linebacker who has little chance of making the team, or creating real competition at a position. Wright left UCF last season as their career leader in field goals and points. He camped with the Pittsburgh Steelers.

After taking just two RBs in the skill position phase, Tampa Bay opted for three in the open phase, adding DJ May, Ralph Webb, and Jacques Patrick. Patrick may be the most intriguing: Heavily recruited out of high-school, he attended Florida State and is another size and power back. Webb is a speedster with a 4.48 40. May, a former linebacker who had injury and off-the-field issues at Wyoming, is worth a flier.

Tampa sacrificed a little size in the WR room when they took Auburn’s all-time leader in receptions, Ryan Davis, in the open phase. Davis is just 5’9″ and could end up in the slot. Freddie Martino is another player with both NFL and AAF field time. Same with LB Terrance Plummer, as the Vipers added some nice depth pieces in the final phase.

Vincent Testaverde Jr, whose father spent five years with the Bucs, will stay close to home. Vincent also attended Buccaneers training camp this summer. He’ll have to prove he was more than just a sentimental pick. DT Nikita Whitlock has crossed paths with members of this coaching staff in the CFL. He also doubles as a fullback.

While the XFL spurned the idea of allocating players by location, some teams sorted that out themselves, including the Vipers, whose draft has a distinct Florida flair. It’s great for marketing a team before the season begins, but ultimately wins and losses will determine fan support in South Florida. The scouts and coaching staff also seemed to value those who played in the AAF. It could make the transition to the XFL easier having already gone through a similar iteration recently.

Tampa Bay took the first tight end and center of the draft, and built their receiving corps around size to fit Trestman’s West Coast offensive philosophy. Offensive line and defensive back positions are largely untested based on the group they’ll bring to camp, but it’s possible those areas will be improved through the supplemental draft(s) the league will hold, and through usual training camp roster churn.