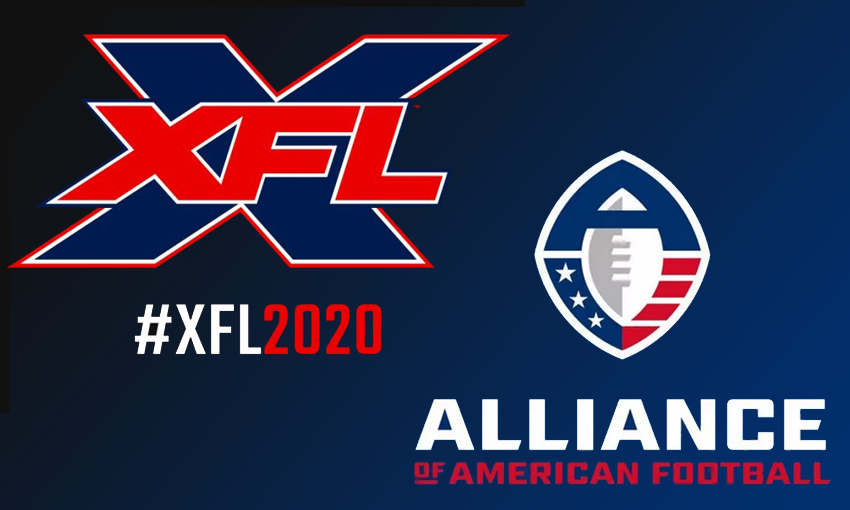 As a football fan for over three and a half decades, I can’t recall another time where non-NFL leagues have been in the news, as much as they have been in the last few weeks. There are actually two Spring pro-football Leagues, both making news at the same time. One in the AAF, that has started their inaugural season, and the other in the XFL, which is building towards theirs. These two leagues have been all over the landscape making news, and sometimes sharing in the actual headlines. Not only are both these leagues in the headlines, but they are in every conversation together. Look no further than the recent Johnny Manziel story.

Perhaps it has something to do with the times that we are living in. In 2019, it’s easier to carve out a piece of the headlines, even if it’s just a small piece on social media sites. Unfortunately, the usual headlines surrounding these types of leagues are not always very kind.

The AAF is finishing up their 4th week of play and they have already had their fair share of turmoil and critique. It started before their season even began. They lost three offensive coordinators and a head coach in Brad Childress. Their highly marketed Atlanta Offensive Coordinator Mike Vick then left his job just before the season started because he had other things to do.

The season started for the Alliance with decent fanfare and some mainstream sports media support. Almost immediately following week one, news came that the AAF’s main investor bailed on the league after week one, a story that was confirmed by Orlando coach Steve Spurrier in the Orlando Sentinel, only days after widespread denial. The league’s main investor took his money and went home. The reports of the league nearly missing week 2’s payroll are disputed. No definitive word on who the initial money man was, but it’s worth noting that Peter Thiel is no longer listed as one of the AAF’s financial investors.

Billionaire NHL Owner Tom Dundon came in to make the buy in, or bail out, depending on which way you want to look at it. What follows this, is a myriad of reports over how invested Dundon actually is, and whether or not, he is going to fully commit to the league. The AAF struggled at the gate in some of their markets, and their financial model started to take some criticism. Critique starts flying at the AAF in several different directions. From the bare boned app to the lack of TV coverage and marketing. Even a potentially non-related joke by Rod Woodson during a game telecast came off poorly, when he said no one is watching or listening.

This past week, reports came out that Businessman Robert Vanech is now suing the league, because of a claim that his idea of the AAF was stolen from him by Charlie Ebersol, and passed on to Bill Polian. To further cloud things, It’s revealed that the AAF was originally supposed to be XFL 2.0, with an offer of 50 million dollars to buy the XFL, being turned down by Vince McMahon. The idea that these two leagues exist because of the original XFL, has already been documented in previous articles on this site, like The Alliance Between Dick Ebersol and Vince McMahon. A league being sued for controlling interest is not a good thing, but you could argue that there must be value in the league if someone is trying to fight to gain control or profit from it.

Fighting is also what has been taking place on certain corners of the internet. The battle is among AAF loyalists and anyone who isn’t one of them. Despite the silliness of it all, it’s actually refreshing to see an upstart league have some passionate supporters who really want to see the AAF succeed. There is an appetite for spring pro-football. The ratings for the AAF started out as 3 million viewers on their lone network game, and have since settled in at about half a million viewers in prime-time on cable. In today’s television landscape, this is respectable. The public having an appetite for spring football is there, being able to retain it in the future will be key.

Changing the perception of the XFL

The league that is actually the XFL, has also been all over the news of late. They have been sneaking their way into the conversation, despite not having any games to play. The league still hasn’t announced its TV deal or team names/identities, but they are halfway home in hiring all eight of their GM/Head Coaches, with Marc Trestman set to be named as the league’s 4th GM/Head Coach of the XFL’s pro football team in Tampa.

The XFL has been a nuisance for some die-hard supporters of the AAF, and other sports fans and media members every time the league makes news or announces a new head coach. The response has mostly been something to the likes of, “Is that really still a thing?” You get the sense that some people just want the XFL to just go away. There’s still a great amount of ridicule and disbelief in its existence. An issue that I touched upon greatly in the article Changing the perception of the XFL.

It’s worth noting that even in the XFL’s press conferences, their coaches have commented on how strange it initially felt to actually consider joining the XFL. Bob Stoops made mention of dismissing the idea initially, and most recently Jim Zorn admitted that the idea of being in the XFL felt strange to him because of the league’s first run in 2001.

Eyebrows are being raised all over the place, and it has nothing to do with Duane Johnson’s “Rock” character. More eyebrows were raised when the XFL’s pay scale for premiere players was revealed this week of being 400 to 600 thousand per season. The significance of this news was matched by the recent knowledge of the XFL meeting with player agents at the NFL combine, to present a potential package to the players who do not get drafted onto NFL teams in late April.

One of the biggest drawbacks of being an upstart football league in the past, has always been the lack of attention and exposure that they receive. Any attention given has always been of the negative variety. Any non-NFL football league has started out with a decent amount of attention from the mainstream sports media, only to fade away into being relatively invisible on the sports landscape. The leagues end up being treated as if they don’t exist, and they only enter the conversation when there is turmoil or struggles that are fairly commonplace with any upstart business. The conversations are usually about everything but the actual games, or the players/coaches that are involved in them.

The famous poet Oscar Wilde once said, “There is only one thing in life worse than being talked about, and that is not being talked about.” Getting attention for these leagues is half the battle. Being a part of the conversation is important, but there will be a moment that will be the deciding factor, as to whether or not these leagues are really going to make it… when the conversations become about the players and the games themselves. As soon as sports fans and the media start talking about the chances of Seattle beating Dallas on the road to make the playoffs, or how Houston’s offensive line matches up with New York upfront. That’s when you will officially know that the leagues have officially made it and are a real part of the sports landscape.