Showing up for the XFL’s Summer Showcases

De’Vante Kincade and the other 799 players that participate in the XFL’s Summer Showcases, are an example of why everyone who loves football, should be rooting for the XFL to succeed. 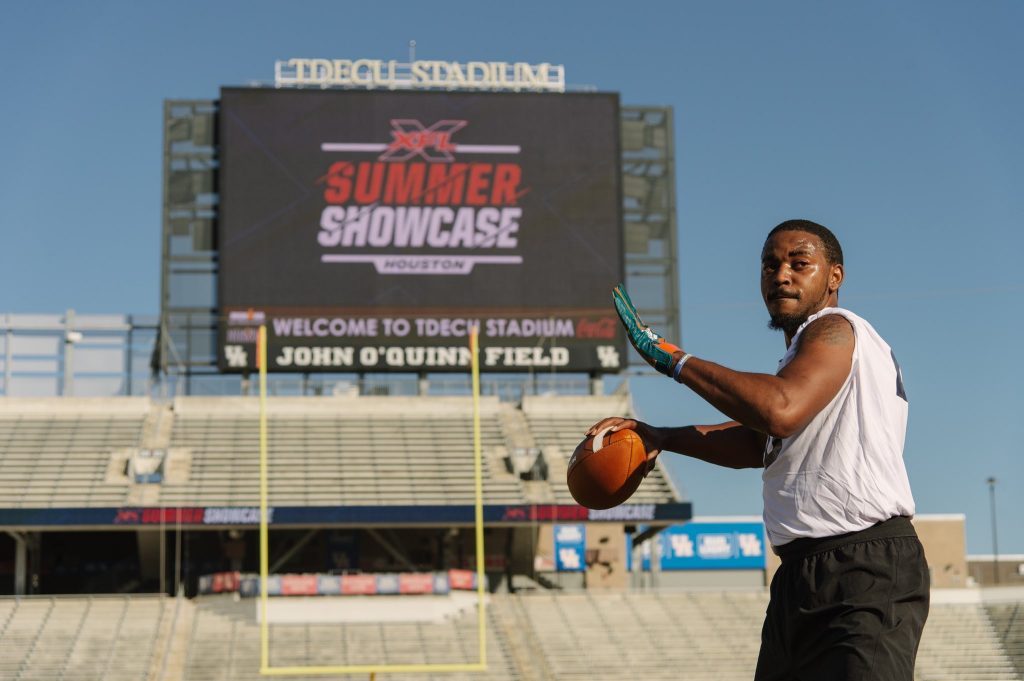 De’Vante Kincade and the other 799 players that participate in the XFL’s Summer Showcases, are an example of why everyone who loves football, should be rooting for the XFL to succeed.

The drive starts for a young quarterback, who is trying to score big. The sweltering heat in Texas is upon him. His blood is boiling, nerves are jumping and his heart is racing at an all-time high. He’s been waiting for this opportunity his whole life. This might be his last chance to finally prove himself…. then all of a sudden, the drive comes to an abrupt halt. His car breaks down on his way to TDECU Stadium in Houston.

With time running out on the clock, the young quarterback is forced to call an audible. His car engine has overheated. It’s time to abandon the game plan, call roadside assistance, and immediately head to the stadium on foot. He makes it just in time to check in, and hit the field to showcase his ability.

This is the story of Grambling State Quarterback De’Vante Kincade, the former 4-star recruit out of Skyline High School in Dallas. De’Vante was invited to the XFL’s first showcase in Dallas on Friday. With six quarterbacks at the showcase, Kincade was told that the Showcase was full, and was asked to return to another Showcase, taking place the next day in Houston.

From day one, it’s been that kind of journey for De’Vante Kincade. He has had so many twists and turns, that it’s no surprise his car would break down on the way to this moment. As a 4-star recruit, Kincade was recruited heavily by several schools coming out of High School. One of the coaches that recruited him was current XFL Houston Head Coach June Jones. Kincade was offered a scholarship by Jones and SMU. De’Vante and June would cross paths one more time before Kincade ended up throwing passes at TDECU on Saturday morning. More on that in a bit… Out of high school, De’Vante would end up signing with Ole Miss. He never got the opportunity to lead that program. He ended up mostly on the sidelines for three years. Kincade then transferred to Grambling State, where he ended up being the two-time Offensive Player of the year in the SWAC. In two seasons as a starting quarterback, Kincade led the Tigers to a 22-2 record, including a 16-0 mark in conference play. Kincade won two straight SWAC championships, and won a national championship. De’Vante amassed 5,297 yards through the air with 54 touchdowns to just eight interceptions.

After the 2017 Collegiate season ended, Kincade hoped that his last two years would earn him a shot at being a pro quarterback. He was anxious to prove himself as a quarterback, and didn’t want to switch positions. Measuring in at only 5’11 and 198 pounds. Kincade ended up not being selected in the 2018 NFL Draft. He did however, receive a post draft workout with his hometown Dallas Cowboys, but again nothing panned out. Looking for an opportunity and anywhere to prove himself, Kincade signed with the Maine Mammoths of the National Arena League in May of last year. De’Vante ended up not playing a single game for them. Two months later, up north in Canada, less than a week after the Hamilton Tiger-Cats traded Johnny Manziel to the Montreal Alouettes. Kincade was brought in to work out for then Hamilton Head Coach June Jones. Kincade ended up impressing enough to sign a contract with the Tiger-Cats. He would end up on the Ticats practice squad for the 2018 season. There were quality QB’s ahead of him that had already earned their spots on the roster, like former Oregon QB Jeremiah Masoli, who has become a star in Canada. There wasn’t an opportunity for De’Vante to get on the field. This past May, Kincade was released by Hamilton. Once again, being sent back to square one. The XFL came calling with an invite. One in which, he almost missed out on twice.

Kincade and the other 799 players that participate in the XFL’s Summer Showcases, are an example of why everyone who loves football, should be rooting for the XFL to succeed. There is no guarantee that De’Vante earns himself a contract, but there’s no question that his heart and drive are good enough for one.

The XFL opened up their doors officially this past week to football players, with two Showcases taking place in the heart of Dallas and Houston. The league began its first phase of working out and potentially signing players. All the players that participated in these showcase workouts have unique stories.

There’s former NFL Running Back Christine Michael, a 5-star recruit, former Walter Payton award winner coming out of high school and then bounced around the NFL, making only nine starts, and only carried the ball 254 times in the pros for 1,080 yards and seven touchdowns. There’s 25 year old rookie, the undrafted BYU Quarterback Tanner Mangum. A 4-star recruit who shined when given the chance, but who ultimately ended up splitting time at QB with the likes of, Saints jack of all trades Taysom Hill. There’s also former Air Force Wide Receiver Jalen Rowell. The 6’3 220 pound wideout led the nation in yards per catch. On his way to being drafted into the NFL, his draft eligibility was denied, and Rowell had to finish two years of service before being able to play pro football now. There are also former high end NFL draft picks like Kony Ealy. There are so many unique stories and players that took part, and that will take part in the XFL’s Showcases.

Making an NFL roster is extremely difficult. As documented here in the past, a recent NCAA study showed that only 1.6 percent of all college football players make the NFL. There are thousands of draft eligible players every year that do not get to continue on their pro careers in the states. A simplified look at an NFL roster composition can be seen like this: Every team has 22 starters, 11 on offense and 11 on defense. If you factor in 22 backups to those starters. That brings you to 44 players. You then add three starting specialists per team, a kicker, punter and a long snapper. The total is now 47. That leaves only six spots remaining. All NFL teams carry more than just two running backs, usually four or five. All NFL teams carry more than just four receivers, it can be as many as seven or even eight. This extends to the defensive side as well. Most teams carry more than ten defensive backs. So teams mix and match, doing a little give and take at certain positions to get to their final 53. In what has become a growing roster trend in the NFL, some teams will carry only two quarterbacks, just so that they can fill out their rosters. Sometimes a player, who doesn’t have front line starter ability, will make a roster based on the roles that they fill on special teams. This will come at the expense of players who can be starters, but that don’t fill specific roles as backups or on special teams. A fifth WR has to be able to either bring value as a returner or on special teams coverage, or he will not make the team. There’s no reason to even dress the player if he doesn’t bring game day value. Veterans lose jobs every year in the NFL, at the rate of a few hundred every year. Why? It’s simple. 300 to 400 new rookies make the league every year, and take their spots. The average NFL career is four years. Two reasons for that, one is injuries, the other is that a good number of NFL players don’t see their second or third contracts. Players are constantly being replaced. They come into the league at 21 or 22 years old and by the time, they are in their late 20’s. They are out. The rosters are constantly turning over every year. A lot of quality college players are not getting into the league, and a lot of quality players that did make it into the league, don’t end up lasting long.

The XFL’s goal, as stated by its Director of Player Personnel Eric Galko, is to sign players they feel are NFL players that, for varying circumstances, are not in the league. Players that should be playing in the NFL, or are NFL caliber players. A lofty goal perhaps, but the right mindset to have when trying to put together a pro football league. There are valid arguments for or against a second pro football league existing. Usually the most valid points against one existing like the XFL, is the financial viability of it. Whether or not, the quality of it can get the backing of the viewing public. However, those who are opposed to it, because they see a second league as a “place for rejects”, are out of touch with the realities of how many quality football players are out there. Even if a narrow minded football fan were to dismiss the thousands of draft eligible college football players every year that don’t make the NFL, and just stick with Division 1 football. There are close to a thousand draft eligible players from that group alone every year. The percentage of those elite college players from elite college programs that make the NFL every year is very small. Only 254 players get drafted every year. Then there’s the thousands who are undrafted. For those who question the quality of the undrafted. Take a good long look at NFL rosters. According to the Elias Sports Bureau, there are more undrafted players in the NFL right now than there are first and second-rounders combined. That means there is value in the players that are overlooked. The real argument against a spring football league, is really, Can it survive and thrive? In my mind, there’s no doubt that it should exist. The players and the football ecosystem needs it.