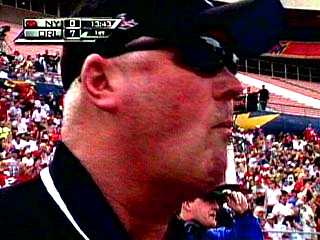 New York – (30 March 2001) — Not often does a head coach stick his neck out and guarantee a victory for his team. Rusty Tillman has been doing just that all week ever since his team lost to the Rage 17-12 last Sunday in Orlando.

Tillman is one of the league’s most maligned coaches and his words have opened him up to more criticism. The Hitmen must now deliver Saturday night at home against The Enforcers on NBC.

Maybe Tillman’s confidence has to do with the fact that early word was that John Avery would miss his 2nd game against the Hitmen. The chances of Avery playing on Sunday look better now then they did earlier this week. The XFL’s MVP candidate, John Avery has been upgraded from doubtful to questionable for tonight’s game. Avery is expected to test his hamstring before tonight’s game. If he plays, Chicago’s chances improve greatly.

On the other side of the coin, Hitmen QB Wally Richardson has been downgraded from probable to doubtful for tomorrow night’s game with a knee injury. If Wally does not play, Then Charles Puleri could return to the saddle as the Hitmen Quarterback. Some of Rusty’s confidence has to be shaken after this news.

NY is no stranger to guarantees however as QB Great Joe Namath and most recently, Giants head coach Jim Fassel have both made guarantees and delivered. The guarantee proves one thing – that Rusty Tillman has alot of confidence in his team and how they have progressed since starting the season at 0 and 3.

Rusty Tillman has over 16 years of coaching experience. He is also a member of the Washington Redskin All Century Team. Tillman was a leader on the field and he led extremely successful special teams units as a coach with the Seattle Seahawks and several other teams. With loads of experience as not only a player and a defensive coordinator/specials coach with 4 different NFL Teams. Tillman has been a strong leader wherever he has been. The XFL has provided him with the chance to be the full leader of a football team. His team got off to a miserable start this year but they have remained competitive all season and now they have a shot at the playoffs. Tillman’s leadership skills will now be tested to the fullest. Rusty told his team after The Orlando game, “We are going to go out and win this ball game”, That was his message to his players about Saturday’s huge showdown with Chicago at Giants Stadium.

The 3 and 5 NY/NJ Hitmen come in as 3 point favorites over the 3 and 5 Chicago Enforcers. Their last meeting took place in week 4 when NY’s defense shut out Chicago in a 13-0 slopfest at soldier field. A lot has changed since then. Both teams have turned around their seasons with new starting QB’s in Wally Richardson and Kevin McDougal.

The Enforcers were 0 and 4 after their brutal loss to the Hitmen earlier this season. The losses and injuries were piling up. Since then, Chicago has made a dramatic turnaround by winning 3 out of their last 4 games. With 2 games left in the regular season, Chicago needs to win this game or they will lose the season series to New York and effectively be knocked out of the playoffs.

The most exciting running back in the XFL is John Avery. Chicago boasts the league’s best rushing attack with the game breaking Avery and Leshon Johnson. Kevin McDougal is 3 and 1 as a starter. His numbers are not superb but he has played smart and within himself. The Chicago offensive line has played well considering the injuries they suffered earlier in the year. Aaron Bailey has been Chicago’s leader at wideout and Luke Leverson and Zechariah Lord have developed nicely as alternate threats. The Chicago defense has been scorched all season long, The last few weeks
though, they have turned things around. Corey Ivy has stepped up and improved his performance at corner and Ray Austin may be the league’s best hitter. Aaron Humphrey may be however, the Enforcers best defender, as he can play any linebacker spot and is a great outside edge rusher. The Chicago special teams has been mediocre all season. Andy Crosland has missed several kicks and his Miami experience has shown in cold weather games.

The Hitmen defense has carried NY all season. The defensive line may rank as one of the best in the league. Israel Raybon, Dwayne Sabb and Chris Maumalaunga have combined for 13 sacks thus far. Ron Merkerson at LB has been a force on the field. The secondary has not been too shabby either as Ty Talton and Brad Trout comprise one of the league’s best safety tandems. Joey Eloms is similar to Chicago’s Corey Ivy in that he was picked on early in the season but he has now stepped up his game. Damen Wheeler is perhaps the league’s best all around corner and it looks like the NFL will be knocking on his door. As for the offense things have improved since Wally Richardson has taken over at QB, but this unit has shown too much inconsistency. The offense ranks near the bottom of the league, and they have had to resort to trickery to get things done. Joe Aska has been the teams best runner but he has been slowed down somewhat the last two weeks by the Hitmen’s new 4 WR look on offense. Mike Archie has been the teams most versatile player as he has contributed at fullback, goaline back, special teams and at WR, where he caught a 33 yard TD last week. Zola Davis has remained consistent all season and Fred Brock and Anthony Dicosmo are decent possession receivers but they have not shown big play ability. Kirby Dar Dar finally gets to start this weekend. He has been the Hitmen’s best receiver after the catch this year. The Hitmen offensive line has too many mental breakdowns during games and can not be trusted to perform at a high level
for 4 quarters.

The Chicago Enforcers are ranked 4th in offense and 8th in total defense.

The Hitmen rank 7th in total offense and 2nd in total defense. The Hitmen boast the league’s #1 pass defense only allowing 140 yards passing per game.

In 8 games, NY has only scored 92 points. That’s a paltry 11 point average. They have only scored 20 points in one game all season.

John Avery did not play the first time these two teams met. Avery has 733 yards rushing in 7 games. He may not play in this crucial game which is a shame. Coach Ron Meyer has to take blame for that because he didn’t take Avery out of the Birmingham game when he should have. Chicago led 13-0 and Avery injured his hamstring with just over a minute remaining.

If NY wins and Orlando beats the Bolts, the Hitmen clinch the 2nd playoff spot in the East. If NY and Birmingham win on Saturday night. Then the Hitmen and Bolts will meet in Birmingham in a week 10 game for the playoffs.

If Chicago wins and Orlando wins, then the Bolts will be eliminated from playoff contention. However, If both Chicago and the Bolts win, Then all 3 contenders for the final playoff spot are still alive in week 10.

Here’s how it officially stands. One Hitmen win and a Bolt loss in the last two weeks gets the Hitmen a playoff spot. Two Chicago wins guarantee’s the Enforcers a playoff spot. The Bolts need two wins to get in and 1 Chicago loss.

The Big Saturday Night Showdown between Chicago and NY/NJ airs this Saturday night on NBC at 8pm Eastern.

The game will also be available locally on WABC Radio 770 am.

Tickets for The game are as low as 25 dollars, You can pick them up at Giants Stadium on game day or call Ticketmaster to reserve seats. Check out www.nynjhitmen.com for ticket and travel information.

QUOTE OF THE WEEK

You have already read Rusty Tillman’s quote, but here’s Hitmen star Defensive Lineman, Israel Raybon on John Avery’s injury status, “We expect him to play, I think it’s all a hoax, I mean if he don’t play, that’s a shame. Man I am playing with a sprained ankle, you don’t see me complaining. He should be playing.”

Out for this game is Guard David Camacho(Knee), Doubtful is QB Wally Richardson(Knee)and WR Fred Brock(Knee), CB Damen Wheeler is probable with an ankle injury.

If Wally Richardson does not play, Charles Puleri and Corte McGuffey will handle the QB duties. Avery may try to give it a go at game time. If he feels well, he’ll play but if not, Leshon Johnson, the former Giant Running back gets the start.

Both the Enforcers and the Hitmen deserve to be in the positions they are right now. Only one of them will make the playoffs though. The last 5 weeks have been pretty good for both teams but now, only the last 2 weeks matter. Rusty Tillman has done himself no favors by guarantying a victory for his team and Israel Raybon has done his team no favor by challenging John Avery’s toughness and desire to win. The Hitmen offense has struggled all season and sooner or later, they will have to line up and beat somebody. You can not rely on trickery to win games all the time. Charles Puleri has not delivered and if he is called on to take Wally Richardson’s place, No one will expect him to deliver. Which will once again put the Hitmen defense in a position to try and carry their team. The true measure of the Hitmen comes tonight. The team has a chance to prove that it belongs and Rusty has a chance to prove whether or not he was always meant to be a leader. In the end, the results will speak for themselves. I guarantee you that.

The Hitmen Prepare for the Playoffs before the Playoffs
XFL Week 9: Enforcers Win the Marathon