The Houston Roughnecks and Dallas Renegades met for the first time this season, and the much anticipated “Texas Throwdown” did not disappoint. 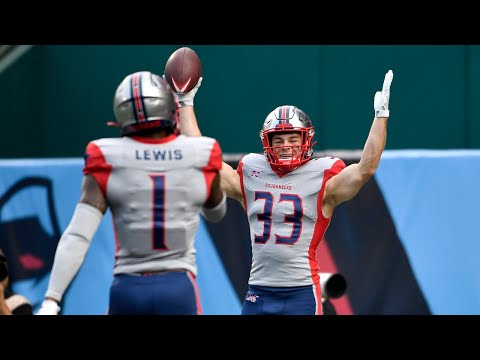 The Houston Roughnecks and Dallas Renegades met for the first time this season, and the much anticipated “Texas Throwdown” did not disappoint. The final result was a 27-20 Houston victory, and it was not easy. The Renegades gave the Roughnecks all they could handle, and to be quite honest, if certain things *cough cough* five takeaways, go a bit differently, the Renegades might be sitting at the top of the West right now. However, those five takeaways did happen, and because of that, the Houston Roughnecks stayed perfect on the season, and took a firm control of the West.

Before we begin getting into the details of the game, I first want to stay that my prayers go out to Landry Jones, who suffered a grueling injury to his previously injured knee late in the 4th quarter, and his status for the remainder of the season is unknown at this time. I hope he can make a speedy recovery, and possibly make a return this season. But more so, I just hope that his playing career is not over, because he worked extremely hard to make it back on the football field, and it would be a shame if that were to be taken away from him. So I pray he is able heal and heal quickly.

Now, as for the game goes, the Roughnecks looked good, but certainly not great. The defense came to play, and they were the ones that won this game for Houston. Literally. They scored the winning touchdown and made the game saving interception. They had three, count them, THREE 1st quarter interceptions, and they never allowed Dallas’ strong running game to get going. They really played a phenomenal game, and good thing they did, because this offense didn’t have its best day. First off, let’s give credit where it’s due. The Renegades defense is pretty good, and they played great this game. They completely eliminated Cam Phillips from the game plan, and they limited PJ Walker to just 25/41 for 239 yards, 2 touchdowns and 1 interception, with a 83.3 rating. This was PJ Walker’s worst game to date, and it’s the first game this season that Walker did not pose a quarterback rating above 100. But man did he come through when they needed him to. He ran the ball effectively, even running over some defenders, and he made some BEAUTIFUL throws in this game. His gem to Nick Holley on the sideline on 3rd down was picture perfect. That throw goes right up there with his sidearm touchdown throw to Phillips against St. Louis as his best throw of the season. Actually, you also can’t forget that beautiful throw down the middle of the field to Nick Holley against the Wildcats. Man, is PJ Walker good. But it was nice to see other players step up when Phillips was taken out of the equation. I’m glad Walker didn’t just try to force it to Phillips and got everyone involved. This wasn’t their best game by any means, but they got the job done.

But the heroes this week are clearly the defense. Man were they phenomenal. 5 takeaways, and the most impressive of them was Gates interception off the hands of Nagel. Wow! How did he make that catch!? I have said about this defense, they are not great, they will give up a lot of yards, maybe even a lot of points. But when they need to come up with a big play, they always certainly seem to do so. How many games has this defense sealed for this team? You could actually say, the past three games have all been sealed by the defense. They continue to lead the league in sacks, and if they can keep getting pressure and the offense continues to force teams to play from behind, there will be no stopping this team, which is why they are still undefeated.

The Houston Roughnecks are CLEARLY the best team in the league, and I think they are the HEAVY favorites to win the XFL Championship at this time. Place your bets now, ’cause the Roughnecks ain’t going anywhere.