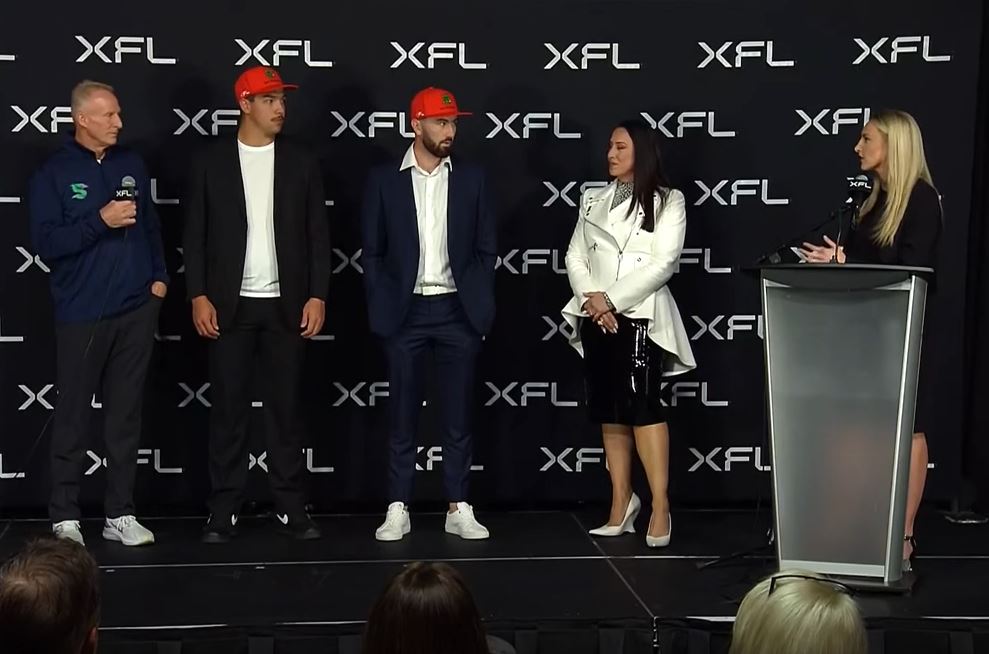 The XFL kicked off its draft week festivities on Tuesday by introducing 15 assigned quarterbacks to its eight teams. The ceremony, streamed live on XFL.com, lasted about 15 minutes with ESPN college football sideline reporter Stormy Buonatony emceeing the event. Many of the quarterbacks were in attendance, trotted on stage with their head coach while donning their respective team’s ballcap, not unlike players selected in the first round of the NFL Draft.

Coaches were given a few moments to comment on their QBs before the all-important photo op with coaches, quarterbacks, and XFL owner Dany Garcia. While many of the quarterbacks assigned were known to be training with QB guru and XFL Director of Quarterback Development Jordan Palmer (I did a deep dive into those QBs in a column last month), others had not been connected to the XFL until very recently.

More quarterbacks are expected in the league soon: Players at the position are eligible to be chosen in the eleven-round open phase of the XFL draft on Thursday; teams could also add QBs in the supplemental draft that has been announced for early 2023. It’s entirely possible the league adds a third assigned quarterback to each team as well, depending on what the pool looks like in January. Signal-callers like Bryan Scott and Jordan Ta’amu have been rumored to be part of the league when their USFL contracts expire at the end of the calendar year, and Kurt Benkert, who is known to have XFL interest, was just released from the San Francisco 49ers’ practice squad.

It’s almost unfair that Seattle offensive coordinator June Jones gets the top QB tandem from the assigned portion. I profiled Montez in my column in October. If Jones can mask Montez’s weaknesses and take advantage of his athleticism and arm talent, look out.

But first, he’ll have to beat out Ben DiNucci. DiNucci is one of the biggest names on this list, having spent the last three seasons with the Dallas Cowboys. He was a 7th round draft pick of America’s Team in 2020. Dane Brugler ranked him as the 25th QB in the class. Lance Zierlein of NFL.com had this to say of DiNucci: “His athletic ability is intriguing, but he must prove he has functional arm strength and enough poise in order to make it on a roster.” In college, DiNucci spent two years at James Madison after transferring from Pittsburgh and was a surprise draft choice by most observers.

He has played in three regular season NFL games with one start, all in his rookie season. He spent 2021 on Dallas’s practice squad and was released at final cuts this summer. This makes him one of the more seasoned quarterbacks thus far in the XFL, and immediately makes Seattle’s QB battle an intersting one to watch once training camp opens.

AJ McCarron is the oldest (32 years old) and most experienced (17 NFL games) quarterback assigned on Tuesday. A two-time National Champion in college with Alabama, McCarron was drafted by the Cincinnati Bengals in the 5th round of the 2014 draft. He became known as a high-level backup for much of his career, compiling a 2-2 record in games he started, with six touchdowns and three interceptions. After suffering a torn ACL in the 2021 preseason, McCarron didn’t get signed in the 2022 offseason.

Willis was a quarterback that recently worked with Palmer, and also has spent some time in NFL camps. While McCarron would seem to have the leg-up on the competition out of the gate, and may even start the season under center for St. Louis, XFL 2020 showed us that being the more experienced QB on the roster doesn’t guarantee anything once the games begin.

Silvers seems like he’s been around forever, but is only 28 years old. He was on his way to being benched in Seattle in XFL 2020 in favor of BJ Daniels when the pandemic shut the league down. Playing in Jim Zorn’s offense probably didn’t help. He’ll have no excuse this time around, throwing in offensive coordinator AJ Smith’s wide-open offense. Silvers also worked with Palmer and was profiled in my QB column.

In speaking with NFL scouts this spring, longtime NFL Draft writer Bob McGinn wrote that Eleby “(M)ade the puzzling decision to depart a year early as a fourth-year junior. He has an outstanding arm. However, he lacks size (6-0 ½, 206) and speed (4.90), wasn’t a diligent worker, didn’t call much at the line of scrimmage and was seldom effective out of the pocket.” He was McGinn’s 16th-ranked QB in the class.

The Athletic’s Dane Brugler had Eleby 11th, and tagged him with a 7th round grade. “Eleby put plenty of splash plays on tape that are encouraging, but his snap-to-snap consistency and lack of high-end traits are concerning for his next-level jump. He has the talent to survive in the NFL, even if it means a year or two on the practice squad to start.”

Per NFL.com’s Zierlein: “Eleby’s below-average size and physical tools are a concern. He’s not going to outpace safeties with velocity and arm talent, but he does a nice job of extending plays and searching for the big play during scramble mode. He’s a good leader with a lack of traits.”

Eleby was only able to snag a rookie minicamp tryout spot with the Seattle Seahawks, though he was not signed. It’s not difficult to read some of these scouting reports and think of another Houston QB, PJ Walker. If Eleby turns out to be even half of what Walker was for the Roughencks in 2020, they’ll be in good hands. Silvers may have his work cut out for him to hold off Eleby.

If you hadn’t been paying attention to the rumblings in the days before the QB Selection Show, you may have been surprised to see Kyle Sloter’s name among those chosen. Sloter played in the USFL this spring and was a 1st round pick of the league’s New Orleans Breakers. He was named to the All-USFL team and lead the Breakers to the semi-final round of the playoffs.

All of that earned Sloter a look with the Jacksonville Jaguars in July. In the Hall-of-Fame game to open the preseason, Sloter went 13-of-25 passing for 127 yards and a touchdown. He was released a few days later. In college, Sloter started just one year, at Northern Colorado, after transferring form Southern Mississippi. He entered the NFL as an undrafted free agent in 2017 and has had stints on seven different NFL teams.

Plitt was also an undrafted free agent, signing with the Cincinnati Bengals this spring. He trained with Jordan Palmer and in my October column, I wrote “Plitt’s intelligence and experience calling plays and protections at the line of scrimmage at Ball State will help him in processing Hayes and Long’s offense.”

Perez has the distinction of playing in the AAF in 2019, the XFL in 2020, the USFL in 2022, and now the XFL again in 2023. If only he could build a time machine to go back and quarterback the Memphis Maniax in 2001. Perez was actually in this position before, as an assigned quarterback to the Los Angeles Wildcats in 2019. Prior to the regular season, he was traded to the New York Guardians.

He eventually wrested the starting role away from Matt McGloin and seemed to right the offensive ship when the pandemic hit. Perez put up an impressive stat line in nine USFL games this year, completing over 70% of his passes for nine touchdowns and just one interception. He may have the clearest path to a starting job of anyone on this list.

He’ll still be challenged by McClendon, who was a backup of the Wildcats in 2020. It’s hard to see him overtaking Perez, but there’s a reason Rod Woodson’s staff opted to put McClendon on their list of desired quarterbacks. He put in time with Jordan Palmer this summer as well.

Francois, a one-time star at Florida State, has plied his trade in the minor leagues of professional football since going undrafted and unsigned after the 2020 NFL Draft. He attended the Florida Showcase in Bradenton and recently worked out with Jordan Palmer.

Dormady, who attended the Arizona Showcase over the summer, is an off-the-beaten-path choice for an assigned QB. Dormady began his college career at Tennessee, transferred to Houston for a year, then to Central Michigan, where he had the most success. He graduated in 2020 but the NFL didn’t come calling. He did work out for the Green Bay Packers in 2021, taking a break from his career as a real-estate agent for that opportunity. Dormady will have to press pause on that part of his life again as he competes to win the starting job in Orlando in 2023.

Pass, a rookie out of Prairie View A&M, seems like a long-term project, which I noted about him in my QB column. However, Anthony Russo doesn’t appear to be the guy who can step in and fill the starter’s role until Pass is ready. Russo started for Temple, then transferred to Michigan State as a graduate student. It was a curious decision, as Russo failed to beat out Payton Thorne and only threw nine passes as a backup in his final collegiate season.

Russo did earn a minicamp invite with the Carolina Panthers in May. He also worked out at Michigan State’s Pro Day in which XFL Senior Vice President of Player Personnel Doug Whaley was in attendance. That led to a league invite to the D.C. Showcase. Look for San Antonio to add a more experienced QB either in the open phase of Thursday’s draft, or in January.

DC had the unfortunate luck of having their second quarterback, D’Eriq King, sign with the Panthers’ practice squad just a day before the QB allocation. There was not enough time to secure another quarterback, so for now, DC rolls with just Eric Dungey. The assumption is that if King is released by Carolina, DC will retain his rights.

Dungey starred at Syracuse, rushing for 35 touchdowns and passing for 58. He was Dane Brugler’s 14-ranked QB coming out in 2019, writing that “Dungey is an intriguing dual-threat weapon with a skill-set (and injury history) similar to Taysom Hill, who has carved out a career with the Saints.” He signed with the New York Giants after the draft, and like Hill, he became a dual-threat QB/TE. Dungey landed in the XFL in 2020 as a QB with the Dallas Renegades (playing in three games) and in 2021 spent the offseason with the Cincinnati Bengals.

Dungey and King have playing styles similar to one another, so if DC ends up drafting a quarterback or two in the open rounds on Thursday as protection in case King stays in the NFL long-term, look for their acquisitions to have strenghts that mirror these two.