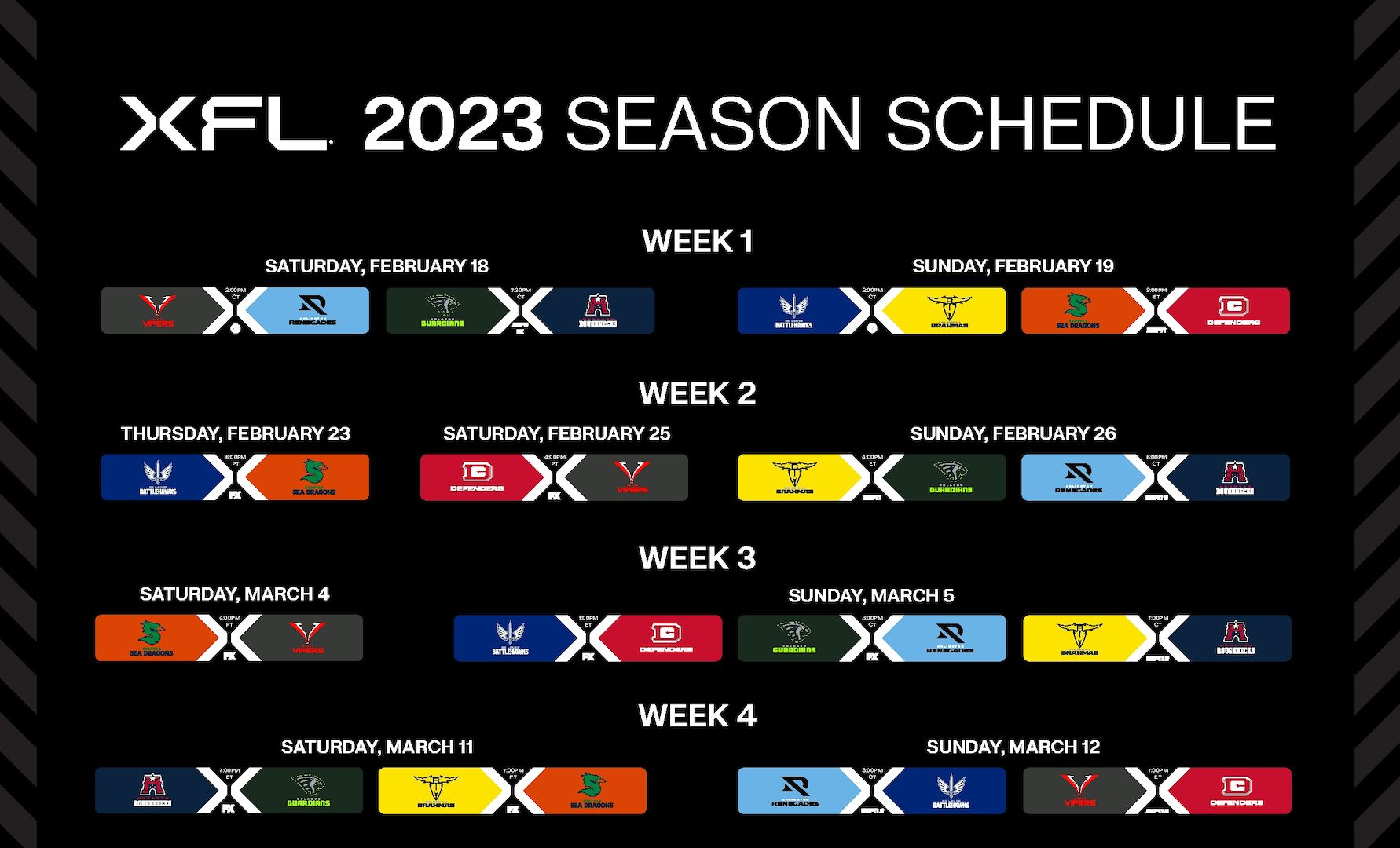 XFL social media managers can rest easy tonight: No longer will their Twitter and Instagram posts be flooded with replies from impatient fans begging them for the team’s schedule. The XFL released its week-by-week schedule, including on what TV networks the games would be broadcast. The schedule can be found here, while the joint XFL-ESPN press release can be found here.

Here are some interesting nuggets that I found in sifting through the 43-game schedule.

Games on Saturday and Sunday…and Monday, Thursday and Friday?!

XFL 2001 and 2020 both had games on Saturdays and Sundays only. That was expected to happen again in 2023, until XFL Chief Revenue Officer Erica Muhleman revealed in a Q&A at the Hall of Fame Luncheon Club that the league and its broadcast partner were considering potential Thursday and Friday games.

Weeks two and five feature Thursday night games, both in Seattle, with 9pm EST starts on FX. The Sea Dragons are involved in the lone Friday offering, during week seven at Arlington. In a twist, there’s also a Monday night game in week six as Houston visits DC. That game is also on FX, missing out on the potential synergy of having Monday Night Football on ESPN during the NFL offseason. Understandably, ESPN and the NFL may not have been comfortable with that branding given how closely associated it is with the National Football League.

This is a no-lose situation for the XFL and ESPN: A successful viewership number on any of those nights could lead to more games on weekdays in season two. And if they don’t do well, those are nights the league and networks can steer clear of if at all possible in the future. The Monday night game helps the league avoid competition from the South Regional games of the NCAA Tournament scheduled for that Sunday.

No games exclusively on ESPN+, but a healthy dose of FX

Ahead of the schedule release, there was some concern that ESPN could decide to kick some games to ESPN+, limiting the XFL’s exposure by placing it on a subscriber-based streaming network. In the end, ESPN+ will stream all 43 games simultaneous to their airing on network or cable TV.

This is an opportunity for the XFL and ESPN to experiment a little bit; they could simulcast the game on ESPN+ but offer a different viewing experience there, similar to what the network already does with Monday Night Football (regular game on ESPN, ManningCast on ESPN2) or the College Football National Championship Game (various feeds on various ESPN networks).

Could a game be broadcast with no announcers, but rather only player and coach mics open for viewers to hear? Something like that could entice fans to seek out the ESPN+ broadcast instead, though it’s unclear what added cost, if any, would be associated with offering a separate viewing experience.

Though ESPN+ doesn’t have any exclusive games, FX has many. In fact, they’ll air more games than either ESPN, ESPN2, or ABC. FX will have 15 games, there will be 12 for ESPN, 10 for ESPN2 (cleverly hidden in the press release by combining the games that will air on ESPN and ESPN2, making the number larger than the FX number) and seven for ABC.

FX in its current state is not known for sports, which may prove challenging to get fans used to finding the station, and may make it more difficult to get casual sports fans invested. UFC has occasionally aired on FX since the company was purchased by Disney in 2019, but that’s about it for live sports.

Interestingly, as of 2020, FX was in 84 million homes while ESPN and ESPN2 were in 76 million homes as of 2018. Those numbers have both decreased due to cord-cutting, but it shows that FX is not necessarily a lesser cable station as some may think of it. Even so, there may not be the ratings/viewership pressure that would come from more frequent appearances on ESPN and ABC.

The two most important parts of the season for a league like the XFL are the beginning and the end. The start of the season is when the curiosity-seekers stop by and you want as many of those as you can get, as a bigger early audience means there are more viewers you have the opportunity to convince to stick around.For the XFL, they have two offerings on ABC in week one, on Saturday and Sunday. The other two games are on ESPN, representing the two strongest networks in the partnership.

The end, the last few weeks and playoffs, is where the leveling off of viewership that happens naturally throughout the course of the season can pick back up, with the possibility of ending the year on a high note. Once the playoffs begin, the semifinal games will air on ESPN and ESPN2, while the championship will be shown on ABC. The middle of the season may be heavy on FX showings, but the beginning and end, when casual viewers are most likely to tune in, should be easier for them to find.

Little consistency in timeslots during the season

In one of the many examples of “you take what you can get” sprinkled throughout the schedule, the XFL game times run the gamut during the season. One of the main complaints of the XFL 2020 programming schedule is you really had to pay attention or seek out game schedules to figure out when teams would play.

The XFL would likely have preferred dedicated dates and times like the NFL has every Sunday so that fans wouldn’t have to work so hard to find the games. In the first two weeks, six of the eight games are in different timeslots. The most common times seem to be 7pm Saturday nights (five games) and 3pm on Sunday afternoons (four games). But that’s still only for half the season or less. As the XFL grows and becomes a dependable staple of programming for ESPN, here’s to hoping they can find a more consistent timeslot for ease of access.

XFL3.0 debuts with Vegas at Arlington in the XFL’s home base

It should be no surprise that Arlington gets the first game of the season; in fact, it wouldn’t be a shock if that was negotiated by the city in the deal to make Arlington the XFL’s hub. One would imagine the league would’ve preferred Seattle or St. Louis to kick things off from the perspective of having a rocking live atmosphere for those tuning in to see what this XFL is all about. As has already been established elsewhere in this column, beggars can’t be choosers.

This scheduling choice is different than the one made by XFL 2001 and 2020, where the championship game followed the week after the semifinals. There don’t seem to be any obvious conflicts on the open date in terms of sports competition, yet this feels like a broadcast decision more than an XFL one. It’ll also be interesting to see if the league or networks have any special events or programming planned for the off week.

The best city for drawing live fans in 2020 will have to wait until almost midseason before they get their first home game. There are a lot of dynamics in play when trying to schedule eight stadiums in eight cities when your league may not be the priority in those places (or when the league gets a late start requesting dates), so this wasn’t necessarily by the XFL’s choice. But if there’s one franchise that will draw no matter the situation, it’s probably St. Louis.

Vegas gets one extra week to sell tickets

The big story behind the wait on getting a stadium secured for the Vegas team is that they haven’t been able to sell season tickets yet. That puts them well behind their seven league counterparts. In fact, season tickets are stil not available for the team even as the stadium situation has now been resolved.

The XFL could’ve given Vegas a later first home game to maximize time to sell tickets. Instead, they’ll get just one extra week, as they host DC in week two. Only needing to sell in the neighborhood of 8,000 tickets per game will help, though at this point even that seems daunting as we approach a month-and-a-half until the Vipers debut at Cashman Field.

A final week battle for Texas