Expect to see the Guardian’s offense run through McGloin. 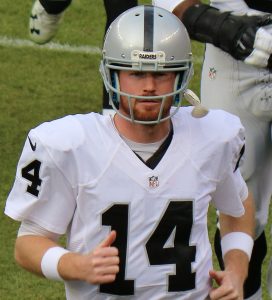 After a dominant senior season at Penn State, quarterback Matt McGloin was signed by the Oakland Raiders.

In McGloin’s rookie season (2013) he started six games, after the benching of starting quarterback Terrel Pryor. McGloin went on to win one game against the Houston Texans, going 1-5, and was later benched for Terrel Pryor.

The Raiders then selected quarterback Derek Carr in the second round of the 2014 Draft to take over at quarterback.

While McGloin does not hold an illustrious NFL career, the experience he offers to the Guardians, compared to other quarterbacks in the XFL, is something irreplaceable to the club. Most of the QBs in the newly established league have only seen NFL practice squad time, and some are coming into the new season with no professional experience.

For example, Cardale Jones of the DC Defenders. Jones was at one point a household name in the college football universe and even had a short NFL career. But, he never started an NFL game, or stayed on a roster as a backup. Even though Jones’s youth might be attractive to a team, McGloin’s experience can never compare. That is the case with most quarterbacks in the league. While there are better pure athletes compared to Matt, there is simply not a player who has dealt with the pressure of being a starting quarterback in the National Football League.

McGloin comes into the year with a go-to receiver that is no secret to the public. DeAngelo Yancey, from Purdue, is the clubs co-poster boy with McGloin. The ex-NFL receiver is someone who can make a quick impact on the league. McGloin’s playstyle definitely plays to Yancey’s, who is a deep threat, which compliments McGloin’s solid arm.

Expect to see the Guardian’s offense run through McGloin. While he has struggled with athleticism and mechanics in his past, he is more than capable of slinging the ball across the middle and getting moving the ball around the field.

Gavin Hayes is a sports writer and photographer. His past work includes working for Amazin' Prospects covering the New York Mets minor league system, and formally covered the New York Jets and AFC East for Fan Source Network and Prime Time Sports Talk. He now joins the XFL Board staff with intentions to cover the New York Guardians and general XFL news. He can be contacted at ghayes1088@gmail.com , or Twitter/Instagram direct message. Business inquires only, please.