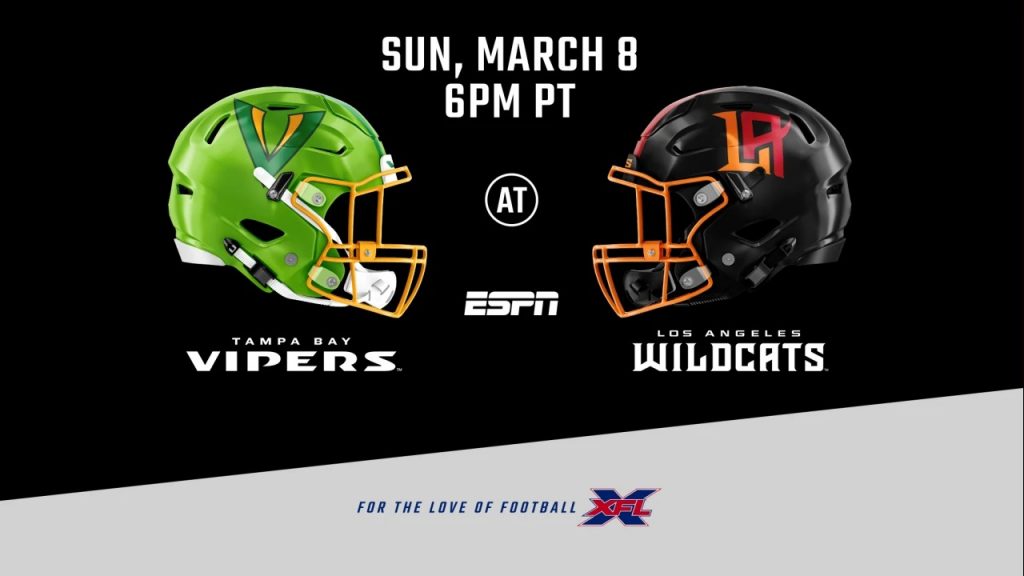 The XFL’s midway point is this weekend, and although there are still five weeks left in the season, it’s fair to call Sunday’s clash between the Los Angeles Wildcats and the Tampa Bay Vipers as a must-win game for each team.  Both teams come into the game sitting at 1-3 and needing to start a second half push if they’re going to make the playoffs.

The Wildcats return home following a 17-14 loss to the New York Guardians. Los Angeles has the third best scoring offense in the XFL (22 PPG) thanks to the league’s best passing offense. Behind the stellar arm of quarterback Josh Johnson, the Wildcats are averaging 244.5 passing yards.

Tampa Bay heads across the country after winning its first game of the season last week. The Vipers dominated the DC Defenders, 25-0. The Vipers lead the XFL in rushing yards per game, averaging 171.5 yards on the ground. It showed against DC as Tampa Bay’s tandem of De’Veon Smith and Jacques Patrick each eclipsed the 100-yard mark last week. Smith finished with 122 yards while Patrick had 108 yards and one rushing touchdown.

The Vipers also have the XFL’s top-ranked defense. Tampa Bay has allowed just 237.3 YPG, while picking up five sacks and two interceptions in four games.

As LA returns home, it must overcome several key injuries. The Wildcats leading receiver, Nelson Spruce, did not practice all week as he battles a knee injury, and LA’s leading rusher, Martez Carter, was limited in practice with a hip injury. Meanwhile, LA kicker Nick Novak was put on injured reserve and replaced by former Oakland Raider and Atlanta Falcon kicker Giorgio Tavecchio.

Tampa Bay’s one notable injury is Smith, who was limited in practice this week with an injured foot.

Off the field, the Vipers were in the headlines this week because of a budding quarterback controversy. Quinton Flowers briefly left the team and was replaced at starting quarterback by Taylor Cornelius. Flowers has since returned to the team but has requested a trade, which has not been granted. The current Vipers depth chart lists Cornelius as the starter, with Flowers as the third-string quarterback behind Aaron Murray.

Los Angeles will host the Vipers on Sunday night at 6 p.m. For fans that can’t attend in person, the game will be broadcast on ESPN.