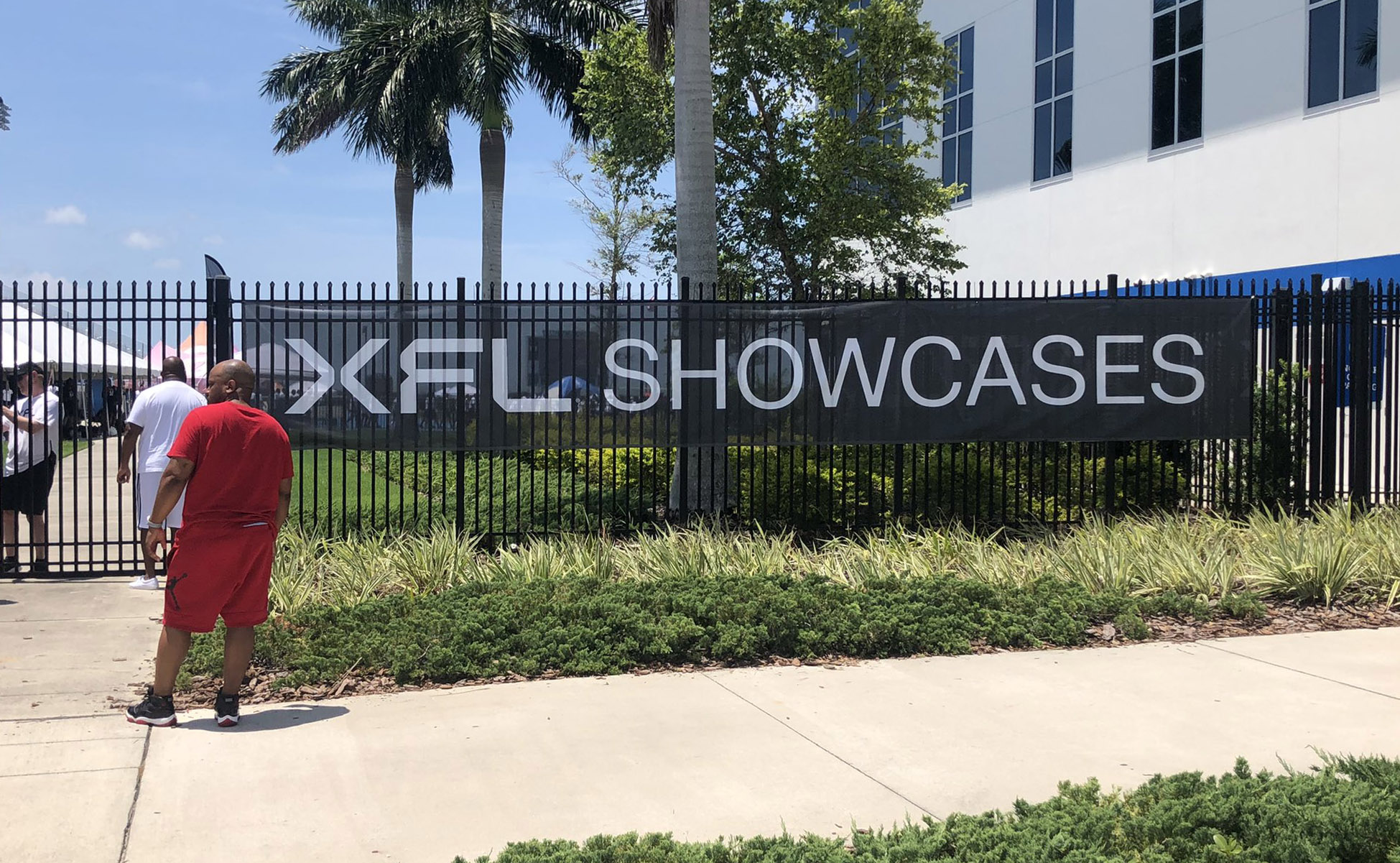 On a hot June Sunday in west-central Florida, the XFL took another step away from being simply an idea, and toward finding players to fill out its eight team rosters for kickoff in February 2023.

In mid-90-degree heat, over 200 players went through drills at the XFL Florida Showcase. IMG Academy in Bradenton, Florida was the host, sparing its outdoor turf for the event. In the morning session, black-shirted defenders spread across the field, defensive backs back-peddling, turning their hips, then trying to locate the ball in the air to make a faux interception. Pass rushers on the other side of the field showed their heavy hands and waist bend while maneuvering around stationary bags that acted as offensive linemen.

“You always hear that saying, ‘don’t talk about it, be about it’,” Doug Whaley, XFL Senior Vice President of Player Personnel, told me during a break in the action on Sunday. “Well, we’ve been doing a lot of talking, now we’re being about it.” For the over 200 hopefuls who attended this Showcase, and the similarly-packed tryout in Washington D.C. on Friday, players vied to show coaches they were about it.

Those players came from all different backgrounds. Some had mini-camp tryouts in the NFL this spring. Others played in the XFL in 2020. Still others recently strapped up for Fan Controlled Football, the Indoor Football League, or whatever pro or semi-pro league would have them. Then there were those who had no pro experience at all, facing the steepest hill to climb of any of the attendees.

Breakaway Data, the XFL’s latest announced partnership, had a conspicuous presence at the Showcase. Cameras were set up around the field to gather information on the participants as they worked out, and a three-sided tent was stationed near the sidelines, under which computers recorded that information. Prior to the afternoon offensive session, quarterbacks took mock snaps, rolling out and throwing on the run all the while those cameras clicked and whirred, capturing their every move.

Other tents were located all over the field to shield players from the notoriously brutal Florida sun and the stifling humidity that rose as morning turned to afternoon. Larger tents were set up near the bleachers, a holding area of sorts where athletes could rev themselves up for their upcoming workout. Some listened to music, others stretched. All were getting in the mindset of making an impression on league brass, hoping to receive the e-mail in the coming weeks saying that they’ve been selected to be a part of the XFL’s player pool for November’s draft.

While players were the focus, it was hard not to notice the head coaches, whose work went beyond analyzing 40-yard dash times and route running. There was Anthony Becht, shaking hands with members of the quarterback group, telling one former ACC signal caller, “I love your work.” There was Rod Woodson, getting to know a wide receiver sitting alone on the bleachers after Woodson finished his media availability, chatting with him about football and life. There was Jim Haslett, prowling the sidelines, just as he’ll be doing in the spring. There were assistant coaches and personnel men reunited, shaking hands and slapping backs, chopping it up about the good ol’ days.

Make no mistake: This day was about the players, the opportunity the XFL affords them and the lengths they’ll go to chase their dreams. “It is great to really get on the grass and have not only coaches but the DPPs, directors of player personnel, around to start looking at the football players,” Whaley said. “And this is what the league’s about…so to really get on the grass and be in the thick of it, everybody’s excited.” That excitement is shared by fans, who embrace this next phase of the XFL rising from the ashes for a second time.