One year after XFL 2020 kicked off, we await news of more XFL football

XFL officials hinted announcements are upcoming and there are reasons to be excited. 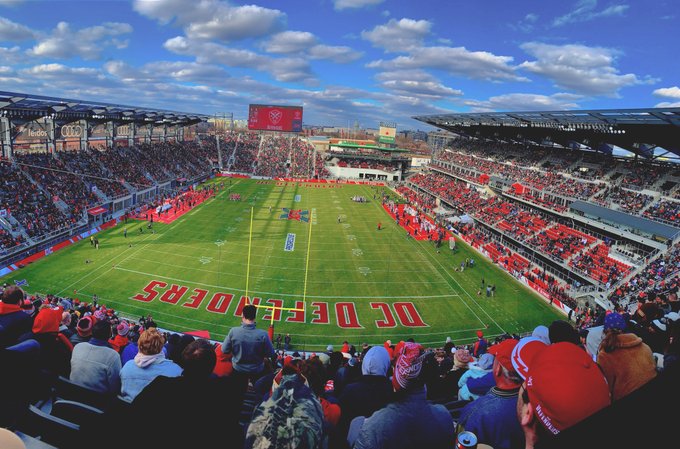 Saturday February 8th, 2020, the XFL kicked off with the Seattle Dragons meeting the DC Defenders at Audi Field in Washington. (Credit: XFL.com)

Today, February 8th, 2021, marks the exact one year anniversary since the XFL kicked off its 2020 season.

It was the weekend after Super Bowl, and the XFL debuted on the afternoon of Saturday February 8th, 2020, with the Seattle Dragons losing to the DC Defenders 31-9 at Audi Field in Washington. The same day, in game two, the Houston Roughnecks hosted the Los Angeles Wildcats, and beat them 37-17.

It is a commonly held belief that the XFL presented a successful on-field product, all the way through week five of a ten week schedule, when Coronavirus began to cancel games, quickly postponed the remainder of the season, and then led the league into bankruptcy.

Today, a year later, not much remains of the league, other than a new ownership group, and a small skeleton staff that is making plans to get the league back on its feet. The XFL has announced plans to return to the field in 2022, which is a proposed future that is about one year away. However, there is no established kick-off date, or nothing else official, for that matter.

One constant is the murmur of die-hard fans looking for any signs of life from the league. For example, fans continue to monitor XFL social media accounts for activity, and some sharp-eyed individuals even noticed that the vaunted blue “verified” checkmarks were removed from some XFL team Twitter accounts. Did this mean that those XFL teams were being dropped by the league? In the end, it was decided that there was probably nothing to see there, as Twitter was changing their policies on “verified” accounts.

Louder than a murmur are the constant inquiries from potential XFL players. We know players are waiting for XFL news as much as any other group, as we see it in their emails, DMs, and social media presences. Players tell us they are staying ready, and are anxious for an opportunity to hit the field. The pool of players waiting for an XFL roster spot cannot be denied, and when the league begins to accept applications to play they will likely be overcome with talent. Consider this to be a definite plus for XFL 3.0.

Some XFL news has been confirmed, such as the league’s move to hire a CFO (Chief Football Officer). This was one of the best pieces of news in the last few months, because it indicated that the league was still moving forward toward a kickoff date.

However, other than the hiring of league staff, there are much more important announcements that should be in the offing, such as an official kickoff date, arrangements with broadcasters, plans for player tryouts, combines, and a player draft. Lastly, we would all love to hear more about the  24/7 – 365 XFL football coverage owner Dany Garcia has hinted at. Maybe even another teaser is in the offing?

Today, when XFLBoard.com asked league officials for an update on XFL 3.0’s progress, they could not offer anything as an official announcement. However, the tone was that of excitement, and the hint was there would be official news in the coming weeks.

Just imagine. If it wasn’t for the unfortunate worldwide dilemma called COVID-19, instead of sitting here wondering what’s next, we would be eagerly getting ready for the kickoff of a second season of XFL football.

Instead, XFL fans have to resign themselves to waiting patiently, and faithfully understanding how XFL 3.0 will soon begin to regale them with plans to restart the football league they all love.

How XFL players fared in the NFL in 2020 (part four)
COLUMN: The XFL should be kicking off today; they aren’t, and it’s the right move