On a distinctive route, Robinson looks to get job done

Kenny Robinson of the St. Louis BattleHawks took a unique path to the XFL. 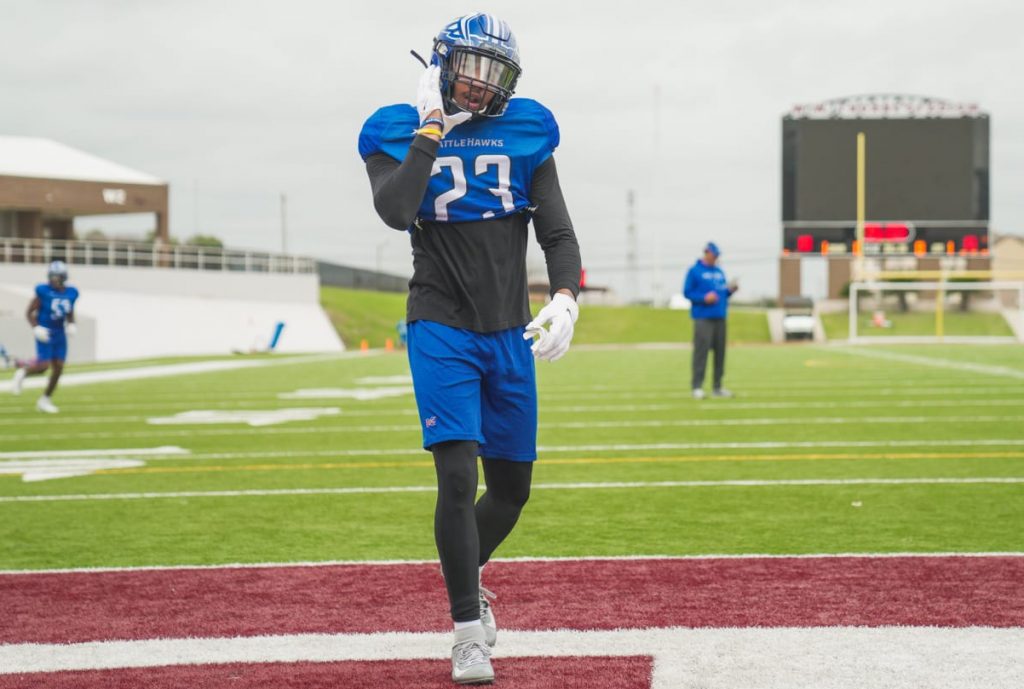 Kenny Robinson of the St. Louis BattleHawks took a unique path to the XFL. (Credit: XFL.com)

Kenny Robinson let his intentions be known before this revamped XFL’s inaugural season even began. The St. Louis BattleHawks’ 21-year-old safety tweeted in January that he had been accepted into the 2020 NFL Draft pool, but his path to the league will go down as being a wholly unique one.

The road began at the Imani Christian Academy in Pittsburgh. As a Saint, Robinson played defensive back, quarterback, and wide receiver. In his time at the school, he was named as his classification’s defensive player of the year and was an all-conference selection on both sides of the football.

He chose to play college football in Morgantown, West Virginia, making 20 starts for the Mountaineers. In his freshman year, he returned an interception 94 yards for a touchdown against the Texas Longhorns.

In 2018, as a sophomore, Robinson was named as a first-team all-conference defensive back. He started the entire season at safety, ranking second on the defense with 77 total tackles.

In the team’s last home game of the season, a tilt with no. 6 Oklahoma to decide which program would play Texas in the Big 12 title game, Robinson intercepted a pass from eventual Heisman winner Kyler Murray. The second-year safety also recovered a fumble and made seven tackles in the 59-56 loss.

Up until this point, Robinson’s path to the pros had been an ordinary one.

But an academic code of conduct violation soon changed that.

“I was taking online courses while I was [at WVU] in my sophomore year in the fall,” Robinson explained. “I had asked some girl to do a few of my assignments and I ended up asking her to do all of my classes. So, she ended up doing the majority of my classes.”

In the spring semester, while Robinson was participating in spring football with his team, he said, the girl ended up doing another assignment of his. The university red-flagged it. Robinson was called to student conduct and had to make a court appearance before he was expelled from the school.

“It was a mistake, pretty much,” Robinson admitted. “It was just a mistake.”

Robinson ended his time at West Virginia as the team’s active career leader in interceptions. He entered the transfer portal and prominent programs came calling. He thought of returning home to play in the same defensive backfield as Damar Hamlin and Paris Ford for the Pitt Panthers. He also thought of moving to the swamp to join the Florida Gators.

Around the same time as his recruitment, his mom was diagnosed with cancer. Rather than argue with WVU about its refusal to release his transcripts, he opted to forego his amateur standing to put his name into the XFL Draft pool.

“I just need to help take care of my mom, so that was really the major emphasis on everything,” Robinson said. “I had to get that handled before going back to school.”

Robinson has patrolled the air for a St. Louis defense that ranks first in points allowed per game (15.5) and second in pass yards allowed a game (173.0) Through the first four weeks, Robinson has registered 16 combined tackles and an interception.

In Week Three, he leapt in front of a Matt McGloin pass and snatched the football, stumbling before pressing his hand into the turf to rebalance himself. He picked up a few more yards and was forced out of bounds. The crowd at The Dome roared.

“It’s like being back in college,” Robinson said of the atmosphere. “That fans were so loud and all into the game. It was a great experience.”

Robinson has spoken with a handful of NFL franchises, he said, mostly regarding background and the incident of his dismissal from school.

One piece of advice from BattleHawks head coach and general manager Jonathan Hayes, a former Kansas City Chiefs and Pittsburgh Steelers tight end, has stuck out to Robinson.

The safety wants to bring St. Louis its first professional football crown since the Rams’ Kurt Warner and Marshall Faulk helped beat Steve McNair’s Tennessee Titans in Super Bowl XXXIV. The main thing for right now though, is Cardale Jones and the D.C. Defenders, who await the BattleHawks for a Sunday afternoon matchup.

Brendan is a junior journalism major at Slippery Rock University in Pennsylvania. Along with contributing to XFLBoard.com, he serves as the Assistant Campus Life Editor and has written over 100 stories for his school's award-winning student publication, The Rocket. He has also contributed to the newspaper's sports section for what will be six semesters; covering games, writing game previews and recaps, and features.