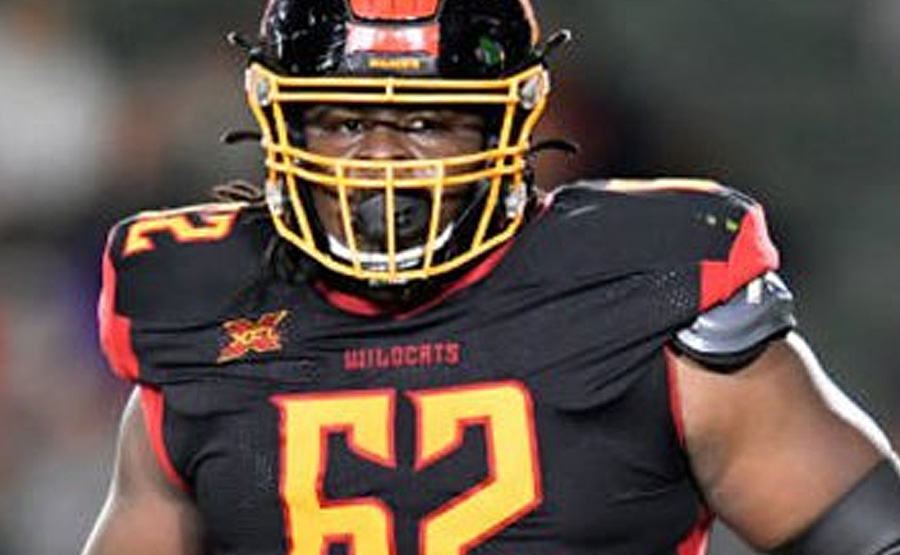 Dwayne Wallace considers himself a “polished veteran” of the spring leagues. Especially true in that he has played in the XFL and later made a name for himself in The Spring League, which was the only place for a player like himself to play during the pandemic.

Dwayne likes to make the most of his football opportunities. In 2019, after attending a showcase and then being passed over in the XFL draft, Wallace attended a Los Angeles Wildcats meet-and-greet and explained to Head Coach Winston Moss how he would be an asset to the Wildcats.

“Even though I was a part of the draft, I didn’t get dressed, which I didn’t understand why,” Wallace explained. “So, I went and saw Coach Moss at a meet and greet in person. I showed him my film that night, and he was like, ‘Man, I’ll pick you up in a supplemental draft.’ The rest was history.”

Sure enough, Dwayne Wallace was selected by the Los Angeles Wildcats in the 2019 supplemental draft.

“Sometimes you just got to be your best seller,” Wallace added.

Wallace grew up in Florida, but his football career got going when he played at Martin Luther King High School in Riverside, California. From there he was a two time All-American at Riverside College and then went to the California Golden Bears in 2016 where he was given a chance to play under coach Sonny Dykes. Wallace finished his college career at Kansas, where he was part of a squad that went to two bowl games, the Tropical Bowl where Wallace was named MVP Lineman, and the NFLPA Bowl where Jack Slater named him the best lineman.

When summarizing his exciting and varied college career, Wallace said, “Every college offense I’ve been on, I’ve had top rushers or been in a top offense. When I was with Coach Dykes, who’s more spread out of tempo high score offense and then got to Kansas, it was more run heavy. I got the best of both worlds. I got the best of both conferences. I played in the Pac 12 and in the Big 12. So it was good. It was good to see competition from both conferences,” Wallace pointed out.

After College, Wallace flirted with the NFL, attending an NFLPA camp and a rookie minicamp with the Steelers, and attended OTAs (Organized Team Activities). He had workouts with teams but never got any closer to a spot on an NFL roster. That’s when the XFL came calling, leading to Wallace playing with the Los Angeles Wildcats.

With the Wildcats, Wallace rotated in and out of the offensive line, however on the fifth week of the season he was given a starting spot in a game against the Tampa Bay Vipers.

“That was my first start, and we started off slow. Then we picked it up. You know, Josh Johnson is a great player as a veteran. He never gets flustered. He always , you know, when he makes a mistake, he’s ready to get back out there and get on to the next play. And that showed,” Wallace recalled his quarterback’s performance in a game that the Wildcats eventually won. In fact, it was the final game of the shortened XFL season, and widely regarded as one of the most exciting games in the entire season.

Like we said… things get crazy in LA after dark 😎
@budlight | #SeltzerCelly pic.twitter.com/yJGm7ZFg61

After the game, #62 Wallace and his teammates celebrated in the Los Angeles locker room, not realizing this was the last XFL game they would play in 2020. Soon the league would be shut down by coronavirus related restrictions.

“We play five games, but I feel like as a team with adversity that we were going through at the time we were coming together,” Wallace said.

With the XFL done, Wallace turned toward opportunities to play in The Spring League, first in San Antonio in the fall of 2020 and then in Houston in 2021. All the while, he was looking for his next playing opportunity.

This past summer he attended an XFL showcase in Arizona, and now he finds himself back in an XFL draft pool.

Referring to the Arizona showcase, Wallace said, “I just tried to show up and try to put my best performance and my best product out there, because your brand name, your name is everything. So I wanted to make sure that when I go back out there I want to let these guys know that I’m still active, I’m still running, I still can perform at a high level… and, you know, the guy that they can rely on.”

Considering conducting a telephone interview with Wallace includes a moment where you have to ask him to go into a quieter room at the gym, you know he is serious about keeping his playing fitness and strength while he waits for his next playing opportunity. Still, during the interview you could hear the clanging of weights in the background, and you could just tell Wallace felt he was missing out on some good reps.

As well as fitness, XFL coaches know how a good offensive lineman is very hard to find. Wallace hopes his experience, attitude and skills will lead him back into an XFL roster.

“I feel like I bring a lot of experience, a high energy guy that’s nonstop on the field and you know you’re going to get a lot of great production out of me, and a lot of great leadership,” Wallace said.

If you want to hear the entire interview with Dwayne Wallace, check out:
Episode 43 “Drafting” with guests Dwayne Wallace and Antwane Grant