NY Guardians TE Jake Sutherland is hungry for his next shot 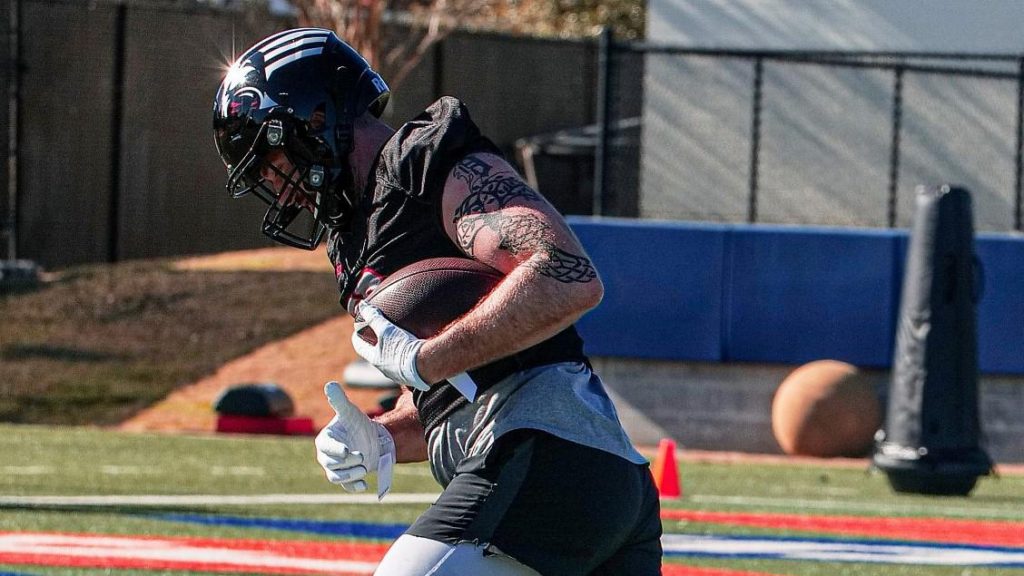 A tight end for the New York Guardians, Jake Sutherland is always staying ready and locked in on his next professional football opportunity.

Eager to play as an Eagle

Starting off Sutherland’s journey at Morehead State, he would see action in all four years of his time as an Eagle but his senior year is when he had the best stats. Sutherland even had the chance to some action on the kickoff unit.

Playing at an FCS or Division 1AA football program made him even hungrier to prove himself.

“Yes, 100% without question. I am very blessed and honored to have played College Football and attend Morehead State University. However, I feel as though I have gotten overlooked and undervalued at the professional level due to playing at a smaller FCS school. I love it though because it has been like this my whole life. I have always had to prove myself athletically, and it just adds to my focus and intensity,” Sutherland said.

In his time as an Eagle he would see action in 52 games; starting 19 of those.

After college would briefly see some time in the AAF on the Atlanta Legends.

He was selected today by the @XFLGuardians (New York) in the @xfl2020 Draft.

During the XFL Draft, Sutherland heard his name called by the New York Guardians.

“Getting drafted into the XFL was an incredible feeling, it’s hard to put into words. It made me realize and feel that all of the hard work and time I have put into pursuing a professional career in football has paid off and it fueled the fire, even more, to get better,” Sutherland remembered.

Obviously being selected in the XFL Draft was great for him, but enticingly more so because the same was not the case for the NFL Draft.

The Guardians had a great crowd and a great stadium in East Rutherford, New Jersey, the home of the New York Jets and the New York Giants.

“Being a part of the New York Guardians organization was amazing. My teammates and coaches were all awesome. Our entire organization had one simple goal we collectively worked towards, which was winning that championship. What made the experience even better than it was was our fans. Right after the first game, we knew that we had a solid, loyal fan base,” Sutherland says. 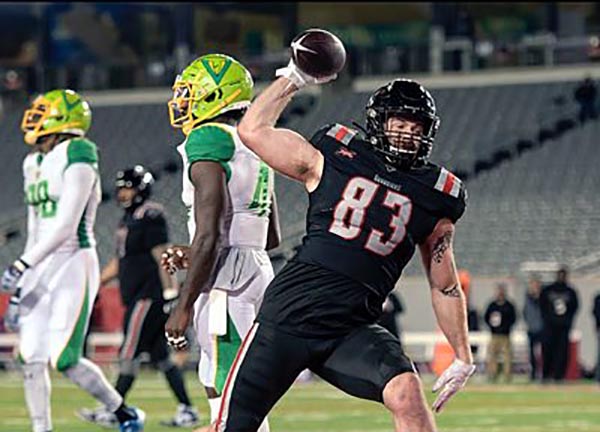 Gazing back on the Guardians

Sutherland certainly had some great times and great opportunities as a Guardian.

“I have a lot of memories from this past season I will carry with me forever. My favorite on the field memory was my overtime TD catch against the Vipers in the preseason game at the end of training camp. Scoring points for my team in that situation was such a great feeling I will never forget it. I also hold countless memories with my teammates/friends on and off the field,” Sutherland reminisced.

Being a part of the Guardians taught Sutherland a lot, the Guardians had an all-around great organization, so making the most of it is what mattered the most.

“I think the biggest lesson I learned during the first XFL season was how to conduct myself as a professional. Everything we did was organized and specific, so I had no choice, but to learn the correct way of conducting myself,” Sutherland remembered.

Before the battle, Sutherland prepares for every game with a great approach and is smart about it.

“The evening before I like to relax and study some film/notes. However, I am a big believer in resting the mind as much as the body, so I trust in my prep during the work week and I just use that as a little refresher,” Sutherland said. “When it comes to game day my mindset switches gears as soon as I get into the locker room and see our uniforms laid out. I get to the field early, put my headphones in, and keep to myself. I’ll stretch, then head out to the field and throw with the QBs and then lace up the pads until it’s go time. I also will have a Monster Zero before every game in the locker room.”

Looking for the next opportunity

Sutherland is always staying ready for action whether it be on the field, in the gym, or watching films to improve and be the best player that he can be on any given day.

“Currently I have been working out 6 days a week, lifting 4 days, and working on fundamental fieldwork 2 days. Pretty much just maintaining the current shape I am in and working on the little details of becoming a better athlete,” Sutherland said.

Putting in the grind six days a week just shows how much he wants it. Some players only show up three or four days a week, but Sutherland puts in the extra because he is looking for that extra edge to be one step ahead of his competition at all times.

Sutherland is a unique breed of tight end, what he can do on the field is different than a lot of others at his position.

“I don’t really like comparing myself to others at my position when it comes to playing style because I feel as though some of the things that I can do on the field are unique and not ordinary at the tight end position,” Sutherland explained. “However, when comparing myself to someone I think of Rob Gronkowski. I consider myself an athletic tight end who can catch the ball very well, and put my hand in the dirt and block someone head-on. I see these attributes in Gronk’s game a lot.”

Jake Sutherland has the right skills, attitude, and mindset to remain a great professional football player. He is always lifting and staying ready at the field. He has the heart of a warrior, and will never give up and play ‘whistle to whistle’ for any football team that he is part of.

Showing up when the pressure is high is what Sutherland does best, for a prime example being his overtime touchdown against the Tampa Bay Vipers.