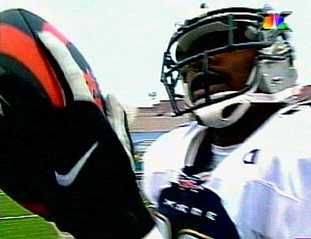 Los Angeles – (25 March 2001) — When last they met, the Xtreme D shot down an Outlaw O piloted by third-string quarterback Mike Cawley with a flurry of sacks and interceptions. First-stringer Ryan Clement was back at the controls this time around, giving the Outlaws reason to believe things would be different. And, sure enough, they scored 17 more points than before. Clement connected for three touchdowns, wasn’t sacked, and could blame his only pick on a deflection. Still, his performance was hardly an aerial showcase. He remained under 100 yards passing well into the fourth quarter and relied for big plays on three interference calls, two of which were questionable at best. He was, moreover, run over more times than you’d care to count or he’d care to remember.

Production on the scoreboard without much production behind center should mean a good day for a club’s defense and special teams, but this wasn’t the case either. Las Vegas fumbled on the opening kickoff after Chrys Chukwuma tried to improvise during a foiled reverse; LA had itself a touch two plays later when Jeremaine Copeland shot past the zone drop of stumbling linebacker Mike Crawford. Tommy Maddox threw a bit high, but Copeland managed a leaping catch for the embarassingly quick lead.

Vegas answered with a nine-play, 79-yard drive capped by Rod Smart’s sprint around right end for 21 yards and a touchdown. Corner Ricky Parker, a natural safety subbing for the injured Terry Billups, was caught out of position on the play after slanting too aggressively toward the point of attack.

Linebacker Shawn Stuckey’s interception of Clement off a Jamal Duff tip allowed the Xtreme to go ahead once more with a 19-yard middle screen to jitterbugging Saladin McCullough. Unfortunately, Maddox soon returned the favor by treating linebacker Joe Tuipala as his intended receiver. The resulting 16-yard rumble to LA’s 16 was the Outlaws’ only real defensive highlight of the day. It paid dividends when Clement regained the lead with a misdirection dumpoff to tight end Ricky Brady. The same play would yield another touchdown in the third quarter, and also one of their two extra points on the night.

Latario Rachal returned the kickoff to the Xtreme 44, setting up an eventual mid-range strike to H-back Frank Leatherwood down the imaginary hashmarks of the end zone. Jeff Russell then scored a safety by blocking a punt over the Vegas end line, and Darnell McDonald chipped in for six from the two shortly after the subsequent free kick. LA was up by 12 at the intermission.

As has become the norm in Xtreme games, the second half seemed largely anticlimactic. The Outlaws twice narrowed the gap to a touchdown, benefiting once from “interference” on an overthrow, yet LA kept their distance by virtue of three field goals from Jose Cortez. NBC apparently sensed the drop in electricity, as they chose to pre-empt the final minute for the sake of airing an Oscar-edition “Extra” without interruption. The Xtreme, though, already had a prize of their own in the bag: a guaranteed trip to the playoffs.

A ROCKY RIDE FOR RICKY

After Dell McGee’s statement game last week, the opposing offense chose to pick on Parker, who was flagged twice for interfering with receiver Mike Furrey. The first penalty came on a deep post in the second quarter as Parker grazed Furrey’s right shoulder pad with his fingers; his coverage was decent and the call dubious, but Vegas liked what it saw. The second found Parker actually shoving his man on a fly pattern without looking back. Both infractions led to touchdowns.

THE IFS THAT WOULD BE GAFFES

Tommy Maddox may have thrown only one pick, but four other passes would have resulted in turnovers if not for some shaky hands and quick-thinking receivers. Get it out of your system now, son.

IF AT FIRST YOU DON’T FAIL…

Perhaps inspired by the repeated success of the Outlaws’ goal-line dumps to Brady, LA tried to re-create the six-point magic of McCullough by lcalling another middle screen from nearly the same point as the first. The play was corralled immediately.