No Bags Being Packed at Legion Field 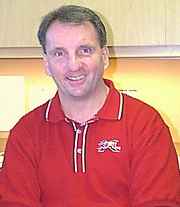 Tim Berryman, Birmingham Thunderbolts GM/Vice President:
“NBC came into this with a minimum 2-year commitment and even if we have a zero rating they would continue to broadcast the games.”
Photo: Bamaslammer

Birmingham – (27 February 2001) — Local sports call-in trash jock Paul Fienbaum was reporting at 5PM that the league was likely to fold by mid-season.

Funny thing, I was a Legion Field today and nobody had their bags packed.

Paul was an early supporter of the XFL and had Bolts Vice President and General Manager, Tim Berryman, on his show almost weekly. However Finebaum’s tone turned sour at about the time that local Media mogul Gene Hallman was “relieved” of his consulting duties with the Bolts.

I’m not suggesting that there is a connection, but if you can connect the dots wait until the next Gene Hallman sports event like the Bruno’s classic rolls around and see how Paul begins to coo like a dove. I’ve also noted the disappearance of the Bolts from the Alabama Sports Foundation website. For those of you outside Birmingham the ASF is a fat cat sports lobby for the state and Birmingham specifically. All of this is just coincidence I’m sure no one would purposefully stab a knife in the back of someone trying to open a new business in good ole Birmingham.

As I have in the past, I had another opportunity to sit down with Tim Berryman and ask a few questions about the Bolts organization:

Q. Why is Gene Hallman no longer part of this organization?

It was a business decision not to use Gene, not out of any animosity. Frankly it was a budgetary decision. I had in-house people capable of marketing the team and developing media relations. I chose to run the football team in the traditional since in that you don’t out source your marketing. I felt that keeping this internal to the organization was what was best for us to develop a corporate identity in the community. We have now about 18 local sponsors which I think exceeds Memphis, I don’t feel in any way that we haven’t done a decent job, we have a statewide radio network with a slew of radio advertisers on it. We’re averaging 27 thousand fans a game. Birmingham is the number 5 market nationally for XFL broadcasts. Our research shows that fans are driving in excess of 25 miles to attend our games, so we are bringing money into Jefferson County. For the first year I’m very pleased.

Q. Several web sites are reporting that the XFL is about to fold?

“That I can tell you is hog-wash. NBC came into this with a minimum 2-year commitment and even if we have a zero rating they would continue to broadcast the games. I think every week our product is going to get better in the way we present it. The league has done a lot of focus group research to see what fans dislike and liked about various styles of broadcast.”

Q. I feel that the league wide low scoring is due to a lack of good offensive lineman. What are your thoughts on that?

“I don’t go along with the offensive line being the problem. I think it’s that we’re getting off fewer plays than the NFL. It ranges from 15 to 20 fewer plays per game. Also I would say it’s a first year league, guys have not played together, There’s no veteran base, In many regards it’s like we’re just coming out of pre-season. As a league were’ examining it and trying to figure out ways to generate more scoring.”

Q. Are you concerned about the ratings slip on NBC?

“I think the trend would be a concern. You can make numbers say anything you want to. If you take the average we are where we promised our sponsors we would be. But for new sponsors waiting to get on board there’s obviously an issue there. At the local team level the General Managers are more concerned frankly about getting butts in the seats and taking care of our local business plans. The problem we face right now is that the news about the declining TV ratings finds its way into our local media and then the perception becomes that the league is not in good health. This has a direct impact on ticket sales”.

Q. I asked Tim one of the most obvious questions concerning NBC. Why no regional broadcasts when there are broadcasts crews at the Number two game on Saturday nights?

He had no comment on this subject. This remains the single strangest and most unanswered question in the XFL. Tim did say that with Birmingham being such a hot market for XFL football it stands to reason that the Bolts would get high ratings for the local NBC affiliates around Alabama. But for reasons as yet unknown this is not going to happen.

Tim also ruined my Saturday again by informing me that the Birmingham game had been bumped again for the LA/NY game. Not that the NY/LA game is a bad matchup, You have to love those NBC guys with all their innovative ideas. A real bunch of risk takers there!

So this leaves us again with radio jocks Rick and Bubba. I listened last week to the Orlando game and did not find it as distasteful as has been reported. Certainly Rick needs to work on some voice inflection and his constant use of the word “uuhh” needs to stop. He can also go to the well too often with some of his collision descriptions. Overall I got a clear impression of the game. I like their salty attitude. Some examples: “We would announce the Orlando starting lineup but, who cares”. And after the Rage started treating the Bolts like the new guy at Attica, Rick announced, “Hey folks, It’s 30 to 6, and it aint that close!” Their game knowledge was good, even spotting an illegal formation before the ref did. Overall I’d give them a C+. They need work but certainly not as bad as the critics would have you believe.

Overall, the Bolts at mid season are exactly where they need to be. Most financial goals are within their grasp. Now if the local “Day Golfers” (You know who you are) will stop throwing knives at them perhaps we can build something special in Birmingham.

Bolts Miss the Flight
Bennett in a Bolts Uniform?