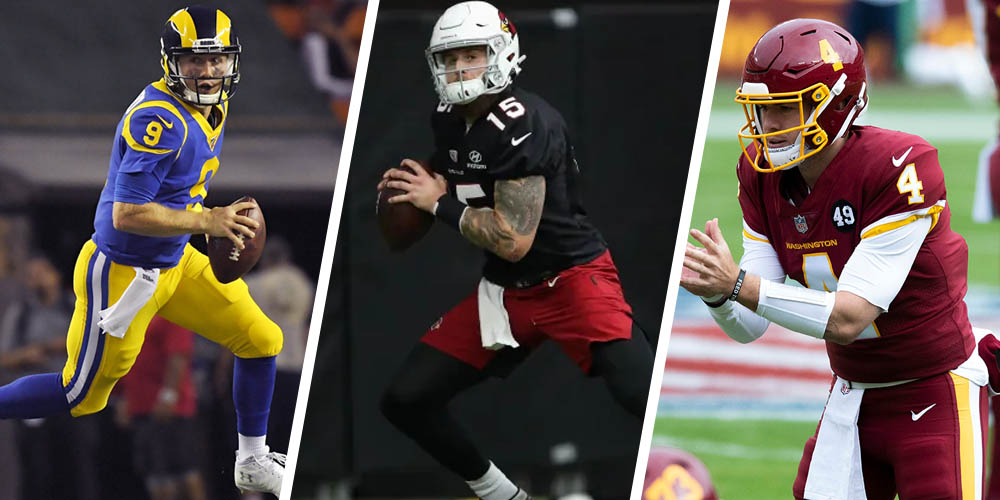 Sixteen weeks into this NFL season, with playoff spots still to be decided on the final Sunday, a couple of unheralded quarterbacks with experience in lower levels of pro football could hold the postseason fate of their respective teams literally in their hands.

The Los Angeles Rams announced that John Wolford will start at QB on Sunday against Arizona. Jared Goff broke the thumb on his throwing hand against Seattle, but is expected to be back for the playoffs. First, L.A. has to get there: The Rams are in with a win or a Chicago loss to Green Bay.

Wolford starred for the Arizona Hotshots of the Alliance of American Football in 2019. For the season, he ranked second in QB rating and passing yards while pacing the league in passing touchdowns. He signed with the Rams shortly after the AAF folded, spending the 2019 season on L.A.’s practice squad. Wolford has yet to throw an NFL pass in a regular season game.

Leading the team on the sideline opposite Wolford could be Chris Streveler. Cardinals starter Kyler Murray injured his leg against San Francisco in week 16. Arizona head coach Kliff Kingsbury said Monday he’s “hopeful” Murray can play, but stopped short of clearing him. The Cardinals make the playoffs with a win or a tie and a Chicago loss.

If Murray can’t go or aggravates the injury, it will fall on Streveler’s shoulders to get Arizona into the playoffs. Streveler is a graduate of the Canadian Football League. He played for the Winnipeg Blue Bombers, mostly as a backup, until being pressed into starting duty due to injury. All he did in that role was lead the Blue Bombers to the Grey Cup Championship in 2019. His slash style compares favorably to Murray’s. Streveler has yet to throw an NFL pass in a regular season game.

In the nation’s capital, the Dwayne Haskins experiment is officially over. The Washington Football Team released their 2019 first-round draft pick on Monday. He was benched Sunday in favor of Taylor Heinicke. If starter Alex Smith (calf) needs to be held out another week, Heinicke will get the nod. It’s a crucial game for Washington as they clinch the NFC East with a win or a tie and a Dallas loss or tie.

Heinicke was allocated to the XFL’s St. Louis BattleHawks in November 2019. He lost out on the starting gig to Jordan Ta’amu in training camp. In relief of Haskins last week, Heinicke was 12-of-19 passing for 137 yards and a touchdown. He has eight games of NFL experience in his career.

The last week of the NFL season is often when backups (and backups of backups) take center stage due to injury, playoff teams resting starters, or teams out of contention wanting to evaluate younger players. This year, the spotlight is on those young players who have taken advantage of opportunities provided them in alternative leagues, worked on their craft, and forced NFL scouts to take notice.

It’s true that sometimes NFL scouts “miss” on or overlook talent, but that can happen in other leagues as well. After all, two of the three players who could end up starting in must-win games Sunday were backups, at least initially, in the CFL and XFL.

With the NFL and NFLPA likely to finally agree to a 17th regular season game beginning in 2021, late-season depth becomes even more important. It’s difficult to develop that depth in training camps that have become more like walk-throughs, or during the season, when snaps for backups are scarce. That’s why mining leagues like the CFL, AAF, and XFL, where your potential backups have shown they can handle themselves in actual game situations, can be useful.

“Proof the (fill-in-the-blank league) works!” has become an overused mantra by fans whenever a former player of that league does anything remotely competent in the NFL. But with their seasons hanging in the balance, up to three teams may hand the keys at the most important position in the game to veterans of those leagues. Win or lose, that’s pretty darn cool – and yes, proof that those leagues have value.

Should the Steelers stick with XFL Vipers kicker Wright next year?
Why XFL Roughnecks punter Rehkow was a good signing