If the XFL is looking for intelligent, young players, Jacob Onyechi is right up their alley. 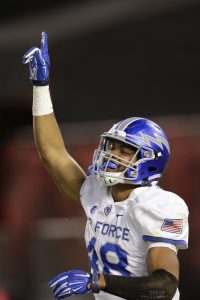 If the XFL is looking for intelligent, young players, with a great attitude, Jacob Onyechi should be right up their alley.

A 2017 graduate of the Air Force Academy, Jacob is likely one of only a few linebackers to hold a degree in Mechanical Engineering. So, where has he been? Just serving his country by testing weapon systems for the United States Air Force… that’s all. Oh, by the way, he still has a strong desire to play professional football. Good thing he has recently been invited to the XFL draft.

Jacob excelled as a linebacker for the Air Force team. In 2015 he started in seven games, recording 25 total tackles, including 18 unassisted, with a career-best seven tackles in the Boise State game. In  2016, his senior year, he recorded two sacks, and 40 tackles (25 unassisted plus 15 assisted).

He was primed and ready for the NFL draft, but very close to his graduation, he was told he was obligated to complete two years of military service.

“That happened,” Jacob explained. “It was kind of a crazy story. When I was getting recruited to play in the Air Force, it had been a long standing rule that before you can play professional sports, going from a service Academy, you have to serve at least two years. My junior year they actually rescinded that rule and told us that we could go and play right away.”

However, the rules changed, and the timing of the change quickly impacted Jacob’s football career.

“In my senior year, actually, the day of the drafts, I found out that we actually had to go back to the two-year commitment, and that we wouldn’t be able to play right away.”

Fortunately, a mature-minded Onyechi takes this setback in stride.

“It would have been nice to be able to pursue the dream right away. But, at the same time, I think I’ve grown a lot in these past two years. So, I don’t think that there’s really a negative to it, at least in my eyes.”

This attitude alone, should make XFL coaches stand up and take note.

This past summer, Jacob was invited to attend an XFL Summer Showcase in St. Louis. Jacob came out of that showcase with a positive feeling about the league. “I attended in St. Louis,” Jacob said. “I was actually really impressed with what they seem to be all about.

Jacob doesn’t have a real preference as to which XFL team he hopes will pick him in the draft. “Honestly. I feel like it would just be a blessing to be on any team,” Jacob explained. “Just being a part of the league in general is an honor itself.”

Being from Sugar Land, Texas, Jacob did say his Mom would be thrilled if he played in Houston. We just hope the XFL makes a mother happy, and drafts Jacob Onyechi into a team close by. We have a feeling that they won’t regret it.

You can hear more about Jacob Onyechi in our podcast:
XFL Xtra Episode 3-2019 – Future Relationships – Jacob Onyechi and Anthony Miller