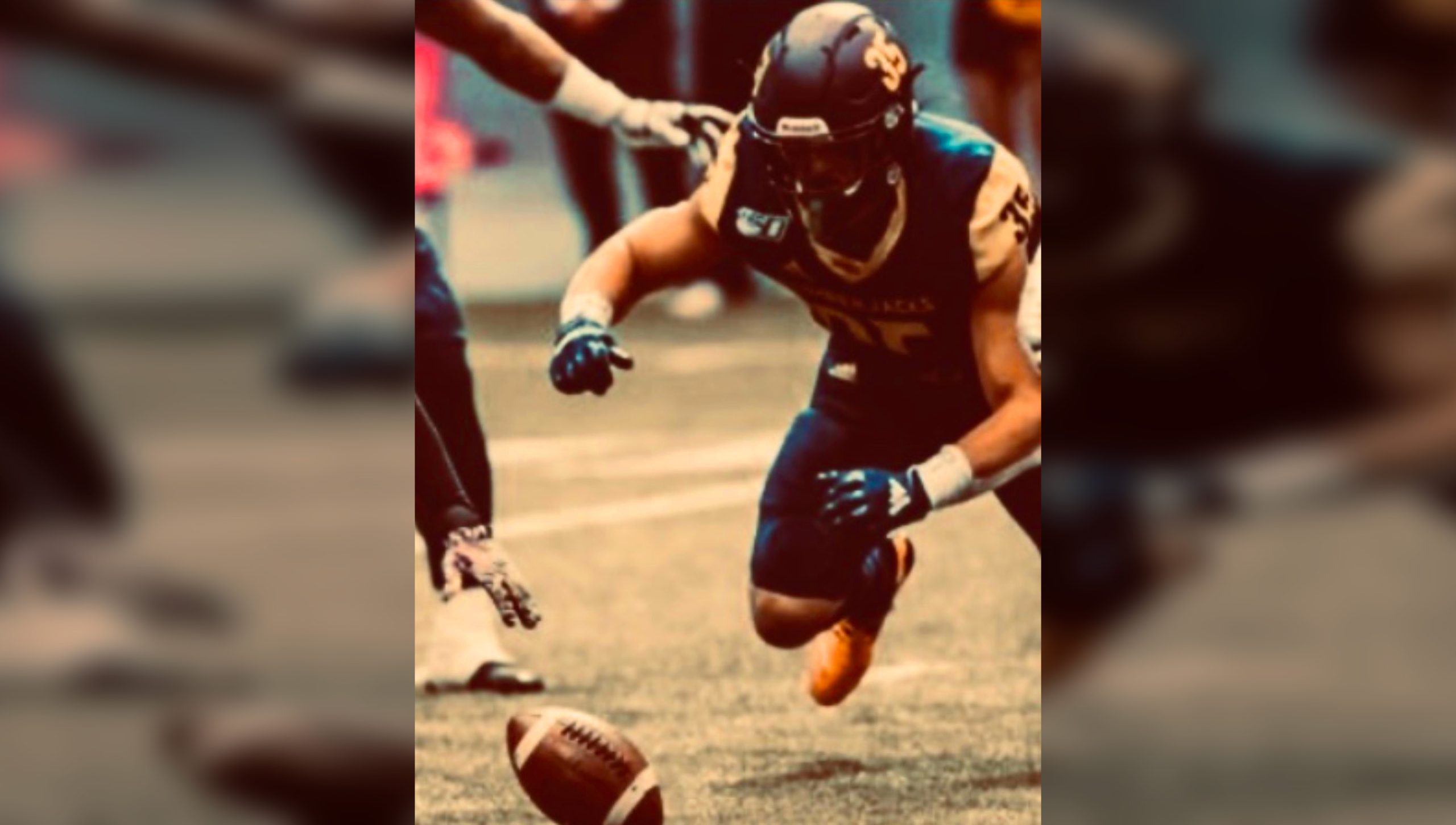 Brooklyn Hardiman developed his love for football while growing up in Brentwood, California, about an hour out of San Francisco, where he played for De La Salle High School in Concord up until 2016.

“It was a great time there. I went to a couple state championships,” Hardiman recalled. “It wasn’t just about football, either. It was just a really good school and education. They taught you about life and how to serve others more than yourself.”

After high school, Hardiman’s college career reflects on a varied and diverse football experience, in that he played for more than one school, making his overall college experience deeper.

“Coming out of high school, I didn’t have many offers,” Hardiman explained. “I actually ended up going to Southern Oregon for my first year.”

Hardiman wound up redshirting in his first year of college. When it came to his second year, he opted to switch colleges in an effort to work his way up to a school in a bigger division.

“I ended up coming home and I went the junior college route going to Los Medanos College in Pittsburg (California),” Hardiman said.

In the fall of 2017, Brooklyn Hardiman started all 11 games at strong safety and had 70 tackles, two interceptions and one sack.  The team finished 9-2, and then they went to a bowl game and won. Hardiman was nominated defensive player of the game.

His performance at Los Medanos earned him an offer by Northern Arizona University, where he played in 2019. Hardiman played in all 12 games for the Lumberjacks, tied second on the team with 69 tackles, and also recorded 1.5 sacks.

For the 2021 season, Hardiman transferred to Colorado Mesa University where he played his senior year with the Mavericks. In 10 games he had 16 tackles, 28 assists, and one sack.

“I was offered by Northern Arizona, and then I went to NAU,” Hardiman recounted. “I did really well and had a good season. I was there for a couple years. Then I ended up grad transferring to Colorado Mesa. I played my last season, in the fall of 2021, last year, and had a solid year.”

Now he finds himself looking for a pro-opportunity, another challenge to overcome on the way to a lasting football career.

“It’s definitely this whole process,” Hardiman said. “It started with my pro day. I’ve been training for my pro day since December of last year… that went well. Then I had a local day, I was invited to the San Francisco 49ers in April, and that was a great experience. I got to meet all the coaches and just be with a bunch of guys from my area that are looking to get drafted or be undrafted as a free agent signing.”

Hardiman has been busy, as he went to a CFL workout with the Saskatchewan Roughriders and went to another football camp in San Diego. He was also selected to attend the Major League Football (MLFB) training camp in Mobile, Alabama, but chose to bow out due to family related needs. It turned out to be a lucky break, as the MLFB camp broke up, due to the apparent financial collapse of the league.

It was the XFL showcase in Tempe, Arizona that really peaked Hardiman’s interest.

“It was run really well, and it was real professional,” Hardiman said. “I was surprised with all the cameras there, like on one drill there was probably five cameras on us from all angles… all the personnel and coaches were there, it was really good to meet them and just to see them, and perform in front of them. You’re always a little nervous, seeing coaches like Rod Woodson and Bob Stoops.”

It wasn’t long after the showcase that Hardiman received an invitation to this fall’s XFL draft.

“I was fortunate enough to receive a draft invite about a week ago now,” Hardiman said. “I’m grateful for the draft… I train five days a week, sometimes six. and I also have a part time job.”

When Hardiman is not doing all that, he spends time studying the league, learning as much as he can about the coaches and teams, just to prepared himself for all future scenarios.

Hardiman would like to add that he feels he would be a good fit for the XFL.

“I play with a very aggressive physical style. I like to play fast. I like to play physical. I would also bring a go to work mentality,” Hardiman explained. “I’m a very quiet leader. I like to lead by example. Day one, I’m going to come in, just go to work, put my head down.”

Hardiman also points out he brings versatility to any team.

“I’ve played everywhere from strong safety to inside linebacker, to outside linebacker. So really, wherever you put me, I’ve been in that position already and played it.”

Brooklyn Hardiman sounds like that tool in the toolbox you end up using in almost every situation. Surely, he is on the radar of more than one XFL team as the draft approaches.