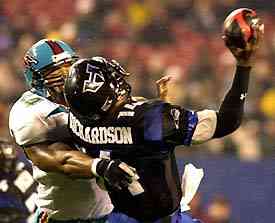 Will Wally Richardson and the Hitmen be willing to take their brand of football into the XFL post season? You bet they would! But first, there is business to attend to… — Photo Associated Press.

The East .vs. West interconference games are over for the regular season. It’s now a 3 week slugfest between division rivals for a shot at the playoffs. The west has two extremely important games on NBC this weekend. In a battle of first place in The West, the Las Vegas Outlaws at 4 and 3 travel to LA to face the Xtreme at 5 and 2. In another important west battle, The 3 and 4 Memphis Maniax travel to the Hell-Hole to face the 3 and 4 San Francisco Demons. The winners of these games will gain a decided edge over their division rivals.

In the East, things are no different, The slumping Birmingham Thunderbolts are 2 and 5 and they will visit the 2 and 5 Chicago Enforcers on UPN Sunday Night. Both teams trail the NY/NJ Hitmen by one game for the 2nd playoff spot in the east.

The team with the best record at the end of the regular season will host The “Big Game” if they make it there. Right now, the Rage are 6 and 1 and have The #1 seed but Los Angeles only trails them by one game and LA has the tiebreaker over Orlando by virtue of their 31-6 victory this past Sunday.

If the season ended today, the Orlando Rage at 6 and 1 would host The 4 and 3 Las Vegas Outlaws and the 5 and 2 LA Xtreme would host The 3 and 4 NY/NJ Hitmen. That leads me to the New York/New Jersey Hitmen.

The Hitmen have turned around their season after starting out 0 and 3, They have won 3 out of their last 4 and now have sole possession of The 2nd playoff spot in the East. They control their own playoff destiny. Orlando is the first team ever in the XFL to clinch a playoff spot. They have yet to clinch the eastern division title but that is seen as simply an eventuality. There is still a very tiny possibility that the NY/NJ Hitmen can win the Eastern Division if they run the table and win all 3 games and Orlando who will be without Jeff Brohm for at least the regular season loses all of it’s
remaining regular season games.

First things first, the Hitmen travel to Orlando this Sunday afternoon on TNN. The Hitmen will try to avenge an early season loss to the Rage where in week 3, Jeff Brohm led the Rage back down 12-3 in the 4th quarter to win 18 to 12. Injuries will play a factor in this game as the Hitmen’s best defensive lineman, Israel Raybon and Rage starting QB Jeff Brohm will miss this game.

Here’s a look at The Hitmen’s remaining games:

As you can clearly see, The Hitmen’s playoff future is in their hands. As far as tie-breakers go the Rage will clinch the division if they beat the Hitmen on Sunday. That would give Orlando a season sweep. The Birmingham Thunderbolts have tie-breakers over both Chicago and NY since they beat both earlier this season. In order for the Bolts to make the playoffs, they will have to beat the Enforcers and Hitmen once again. Chicago is still a longshot, They have to run the table because they are 0 and 3 in the division. The Bolts are 2 and 1 in division games while NY/NJ is 1 and 2.

After this weekend, Things could start to clear up in the eastern playoff race. The team with 4 wins could very well make the playoffs depending on tie-breakers. 5 wins will guarantee one of these 3 eastern teams a playoff spot.

It’s a fun time for the fans right now. Let The Games Begin!