A review of the Los Angeles Wildcats draft picks.

LA Wildcats head coach/GM Winston Moss has proven to be one of the more vocal coaches on social media as he has already won over the city with his attitude and approach to coaching. He hired long time NFL/college offensive coordinator and former Hawaii head coach Norm Chow to run the offense with the intent to throw the ball far and often. Defensive coordinator Pepper Johnson will take what he learned from Bill Belichick with the New York Giants and Cleveland Browns as a player and New England Patriots as an assistant coach to his style of defense which will be speed off the edge from his defensive ends and linebackers (a position he thrived in for 13 seasons). Here is a look at who they were able to draft to represent Los Angeles for the 2020 season. 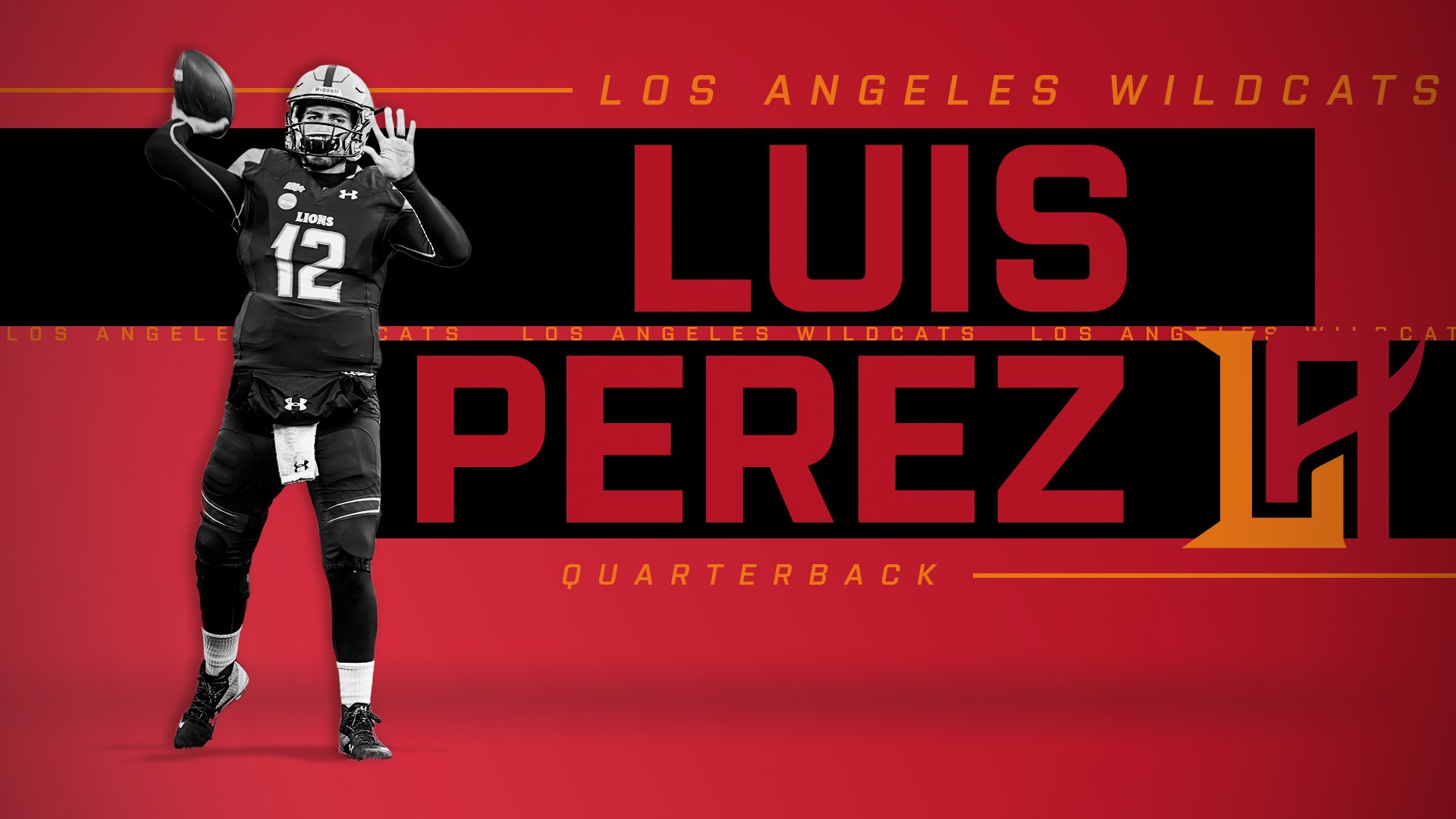 New Wildcats quarterback Luis Perez had an incredible college career in Division II where his Texas A&M Commerce team won the school’s second national title in 2017 as well as took home the Harlon Hill Trophy (Division II’s Heisman Trophy) after throwing for over 5,000 yards and 46 touchdowns. In his two seasons playing at Texas A&M Commerce, he threw for over 8,300 yards with 78 touchdowns and 16 interceptions.

Perez made a fan out of Los Angeles Rams head coach Sean McVay after playing well with the team in the 2018 preseason leading to him making the practice squad for a short time. He made the leap to the Alliance of American Football where he was selected in the first round of the quarterback draft by the Birmingham Iron. After being named the starter, he led the Trent Richardson-led Iron to a 5-3 record, throwing for over 1,400 yards with five touchdowns and six interceptions.

Don’t let the stats deceive you as Perez had two games that saw him throw for two picks in each of those games. He came on strong once he got comfortable with the ball and played smart football. Richardson stole the show with eleven touchdowns with most consisting of short yardage runs. He was known more for being a good game manager, but Perez thrives the most when he is let loose to throw the ball around. Iron’s offense was more balanced with power running, but expect his numbers to look a lot like his college days in Chow’s pass-happy offense.

The receiving core highlights a strong start for the Wildcats in Phase One as their second and third round picks were among the best receivers in the Alliance. Rashad Ross has blazing speed and reliable hands that resulted in him being leading the league in touchdown catches (7) and top three in catches and yards (36 catches and 583 yards) in eight games while playing with the Arizona Hotshots. Spruce was second in the league in catches (38) and proved to be a reliable target for the San Diego Fleet throughout their season. KD Cannon is also a name college fans will recognize as two of his three seasons at Baylor consisted of at least 1,000 yards and 8 touchdowns. He has great speed, but needs more professional experience after jumping around between teams in the NFL.

As for the running game, it will be led by North Carolina star Elijah Hood and New Mexico State star Larry Rose. Hood is better running between the tackles being the bigger, stronger back. Watch out for Rose to be the faster, more elusive back who has great hands. They should make for a great 1-2 punch between the two.

Looking at the tight ends they drafted, expect Scott Orndoff to be more of the receiving tight end as he put up good numbers in the passing game catching ten touchdowns in his last two seasons attending Pittsburgh. Orndoff also caught 7 balls for 130 yards and a touchdown while playing for the Orlando Apollos in the Alliance. Brandon Barnes also appeared in the Alliance where he recorded 9 receptions for 75 yards with the Memphis Express. Expect the two to battle it out for the starting tight end job.

Norm Chow and his offensive staff put a lot of emphasis on pass protection and making sure to have young, strong tackles on each side of Perez. With the first overall pick of Phase Two, Storm Norton joins the Wildcats after having experience with the Lions, Cardinals, and the Vikings in the NFL. Standing at 6 ft 7 in, expect him and fellow tackle Ryan Pope to be handling each end of the line. Second round pick Fred Lauina also comes in with NFL experience with the Browns and should help with pass protect and give the line some versatility.

Anthony Johnson leads the pack in Phase Three has the biggest name on the list from his days as a run stopper and pass rusher in college including 22 tackles for loss and seven sacks. Johnson also has four years of NFL experience and played well with the Memphis Express in the Alliance recording two sacks. Latarius Brady will be able to move around on the defensive line and play at the end or nose tackle. Brady does an exceptional job making plays against the run.

Eric Pinkins played well in the Alliance with the San Diego Fleet averaging about 3-4 tackles per game and proved to be a good open field tackler. Willie Mays is a versatile weapon that can play both defensive end and linebacker. Tre’ Williams made big plays at outside linebacker at Auburn after being named second team all-SEC. He should be another linebacker that can come off the edge quickly.

Jack Tocho played well with the Birmingham Iron of the Alliance under former Iron head coach and current St. Louis BattleHawks defensive back coach Tim Lewis where he deflected six passes and grabbed one interception. Playing under another defensive-minded head coach should take him to the next level in his development. Jaylen Dunlap played great coverage at Illinois recording 11 pass deflections in his junior year, but needs more playing time on the professional level.

Ahmad Dixon had a successful career as a safety in Baylor and was drafted by the Cowboys in the seventh round of the 2014 NFL Draft. He should compete for a safety role as he proved to be good in coverage and is a highly active tackler for being in the secondary. Jerome Couplin has the most NFL experience in the secondary as he played for about 3 years in the league and last played in the Alliance with the Orlando Apollos. Expect him to be the veteran presence to help the younger players. C.J. Moore and Roman Tatum both played well in college and will get a chance to show their coverage skills on the big stage.

The biggest name on this final phase list no doubt was Shawn Oakman. It was an initial surprise for many XFL fans to see him still available after day one, but Oakman is a monster on the line who has plenty of strength to get off blocks and be nightmares for quarterbacks. I can see him start or be apart of the defensive line rotation. Love his motor and should be a fan favorite when teams start practicing.

Nico Evans is a player we got to examine on this very website as he showed great vision and really hard to take down after first contact. After rushing for over 1,300 yards and eight touchdowns at Wyoming last year, he was picked up by the Philadelphia Eagles for a short time before being let go. He’ll compete for a roster spot and might get a chance to join in the running back rotation.

On behalf of all former Alliance fans, I was glad to see Taiwan Jones drafted as he was signed to the Memphis Express 24 hours before the league officially folded. Now, him and Alex Fuches I expect to compete as they were great tacklers with high football IQs playing in Division One football. Punter Colton Schmitt and kicker Nick Novak are NFL veterans that add to a reliable special teams unit. I think the two are the best, most experienced duo in the XFL.

Norm Chow knows he’s got a young quarterback who is still in the early stages of his professional career, but this was a best case scenario for Perez as he fits better with Chow’s offense. His receiving core is strong with players mixed with great speed and hands. Fits perfectly with an offense that will pass as much as the Dallas Renegades will.

Defensively, this should be a solid unit with Pepper Johnson’s background in defense and work with two of the smartest minds in NFL history with Belichick and Bill Parcells. Oakman will be viewed as a player fans want to see play often and could make a major impact early. Anthony Johnson is another defensive lineman that will make an immediate impact. This could be one of the strongest defensive lines in the league.

Moss will have to get used to being a first time head coach, but with his strong coaching staff and talent on both sides of the ball, the secondary will be the focal point as to if those young players are ready to shut down the strong passing games that are in the West with the Renegades (Landry Jones) and Seattle Dragons (Brandon Silvers).