Manziel never played for the league, and plainly, that is because he was “black balled” by league owner Vince McMahon. 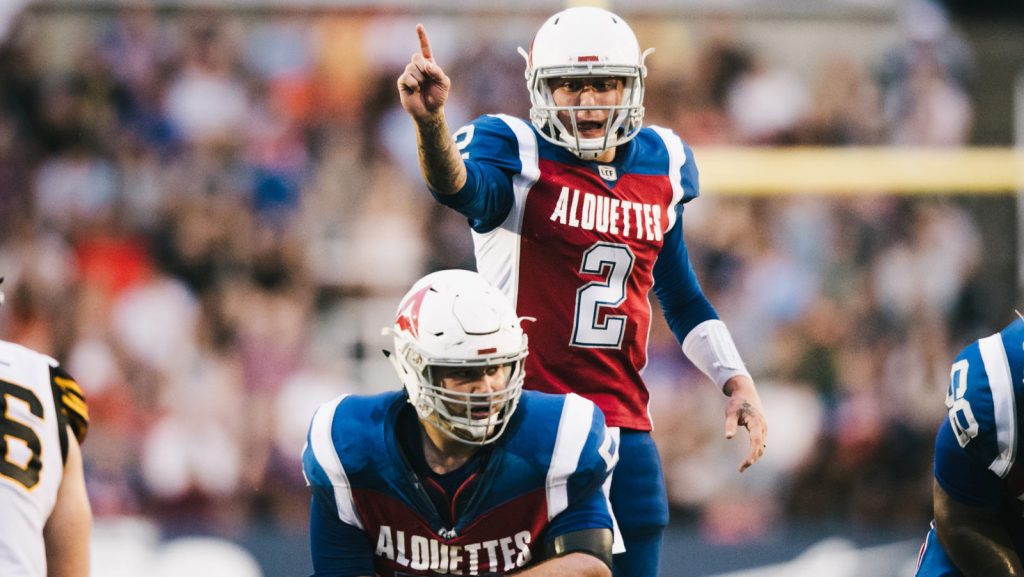 After stints in the NFL, CFL and AAF, Johnny Manziel always said he’d be interested in playing in the XFL. But, he never got the call.

Since Vince McMahon announced the reformation of the XFL football league back in early 2018, Johnny Manziel’s name was often put forward as a quarterback candidate. However, as much as Manziel may have been touted as a perfect fit for the XFL, there were plenty of naysayers who thought the XFL hiring Manziel was not a good idea.

After coming out of a stellar college career at Texas A&M as the first freshman to win a Heisman Trophy, Manziel was selected by the Cleveland Browns 22nd overall in the 2014 NFL draft. His time in the NFL was marked by lackluster performance and misconduct, which soon lead him to take up a football career in the Canadian Football League. When he was no longer wanted in the CFL, Manziel turned his attention to the newly formed AAF and the upcoming XFL.

Although Manziel’s career aspirations marked a long relationship with the XFL, he did not play a down for the league. People have often wondered why this never happened. However, we now know in greater detail why Manziel never played for the league, and plainly, that is because he was “black balled” by league owner Vince McMahon.

February 2019 – Manziel makes himself available to XFL and AAF

Manziel’s XFL non-career began when the Montreal Alouettes of the Canadian Football League released him on Wednesday February 27, 2019. The reason for the release was vague, with Montreal only saying he had “contravened the agreement which made him eligible to play.”

Manziel responded with a thank you in a tweet, and a proposal that he planned to return to play football in the USA. The obvious options to Manziel were the newly formed AAF or the upcoming XFL.

I want to thank Coach Sherman, my teammates, and the CFL fans. My time there reestablished my love for the game of football and the work that goes into it. I look forward to exploring new options within the United States.

At the time, we were never sure how the XFL, and ultimately Vince McMahon, felt about Manziel. Now we do.

On March 16, 2019, Manziel signed on to join the Alliance of American Football as their season was entering its sixth week. The San Antonio Commanders had the first chance to sign Manziel via his Texas A&M connections, but the Commanders waived their option. Manziel landed with the 1–5 Memphis Express, since they needed a replacement for the injured Zach Mettenberger.

Making his debut against the Birmingham Iron on March 24, he came in off the bench to relieve Brandon Sanders, playing three drives in the second and third quarters. He completed three of five passes for 48 yards, along with running for 20 yards, and aided the Express to win 31–25. (Highlights)

The next game versus the Orlando Apollos, Manziel suffered a concussion and left the game after throwing an interception, and then attempting to tackle the interceptor, Will Hill. This marked the end of his AAF career, as three days later the league suspended football operations, ending the 2019 season. 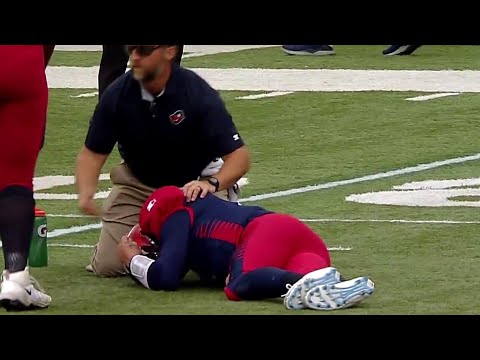 With the AAF gone, the XFL became the only game in town for players like Manziel.

Prior to the XFL holding a series of combines referred to as “Summer Showcases,” there was some expectation that Manziel may be invited to show his talents. Manziel, being a Texas A&M product, was touted as a possible candidate for XFL teams in Dallas and Houston, but when the invitations were sent out for those combines, Manziel was not invited.

On June 8, 2019 ESPN published an interview where Manziel expressed interest in joining the XFL’s Houston team, and be reunited with his former CFL coach June Jones.

“Coach Jones is a great guy,” Manziel said. “I enjoyed him from an offensive standpoint, from a personal standpoint. He’s been there for me, especially when I was in Hamilton, getting to a new place, a different country. I enjoyed my time with him very thoroughly, and I think it would be a great opportunity.”

In fact, while at a sports collectors show in Houston, Manziel discussed his XFL aspirations with multiple reporters, even telling the Houston Chronicle that part of his interest would be based on the team’s proximity to Texas A&M, where he was a Heisman Trophy winner.

“It’s a stone’s throw from College Station,” Manziel said. “A lot of Aggies drove from Houston to College Station. Houston’s a great city that’ll always be near and dear to me.”

Manziel was right, and many would have made that journey. However, at the time, he was not aware that Vince McMahon had essentially blacklisted him from the league.

In recently released court documents, XFL owner Vince McMahon had texted Oliver Luck and admonished him for allowing “Manziel” to be discussed in the media, as he had already forbidden Manziel from joining his league.

“How long R U going to play this game Oliver? U know there is NO CHANCE IN HELL for Manziel to play for us. I will NOT change my mind. So what’s Ur plan??” – Vince McMahon as per The Athletic

Luck’s response to McMahon was to explain that he had no intention of signing Manziel, and that he and XFL President Jeffrey Pollack had decided to let the story continue, and milk the publicity of the Manziel rumors until the Summer Showcases were finished. Afterward, they would simply claim that Manziel did not fit in.

Manziel’s XFL career had already been cancelled, without him even knowing it.

In September 2019, when Houston Roughnecks head coach June Jones was asked to submit his list of potential quarterbacks, he included Manziel.

.@XFLRoughnecks Coach/GM June Jones & staff preparing for @xfl2020 draft in Oct. A key for each team-getting the QB they want: "Each team has given a list of maybe 8 or 9 & a priority." (June says @JManziel2 is on his list?) "He's probably on about 5 lists & was on 1 of mine yes" pic.twitter.com/YAVkTIS2fo

Jones never did get Manziel as a quarterback for the Roughnecks, and we already know why.

However, Jones did form an excellent quarterback room which included XFL star PJ Walker, the only unbeaten quarterback in the XFL. So, Jones made out pretty well without Johnny Football.

In an interview published in the Tampa Bay Times, on December 11, 2019, Thomas Bassinger asked Oliver Luck why former NFL players like Johnny Manziel (and Trent Richardson) weren’t in the XFL.

Luck responded, “I would argue that the players we have are better than those guys, to be honest with you.”

In essence, Oliver Luck said they didn’t need him. He went on to say, “Johnny has his own history, and we have coaches from the CFL (Canadian Football League) who have seen him close up.”

Luck was referring to head coaches like Marc Trestman and June Jones who had closer experiences with Manziel, but he didn’t say why that made Manziel a non-candidate.

Regardless of how Oliver Luck felt about Manziel, he knew that Vince McMahon had already forbidden Manziel from joining the league.

On February 21, 2020, in a strange Friday night tweet made just a two weeks after the XFL had kicked off, Manziel tweeted out, “Oliver Luck. If ya wanna boost your ratings to another level just send me the contract tomorrow and we’re in there. Like I said YEARS ago… XFL2020 give the people what they want.”

A few hours after issuing this tweet, Manziel’s Twitter account was defunct. About twenty hours after he initially tweeted the request for Oliver Luck to send him an XFL contract, Manziel’s Twitter account was restored. However, the tweet to Oliver Luck was no longer present. Instead, Manziel tweeted two new messages saying he, “loves trollin,” and “have zero desire to play any football these days. Just love stirring up controversy.”

It sounds like Manziel was having a rough night.

There was no response from Oliver Luck.

Regardless, the XFL would only play three more weeks before being shut down due to COVID-19 concerns. 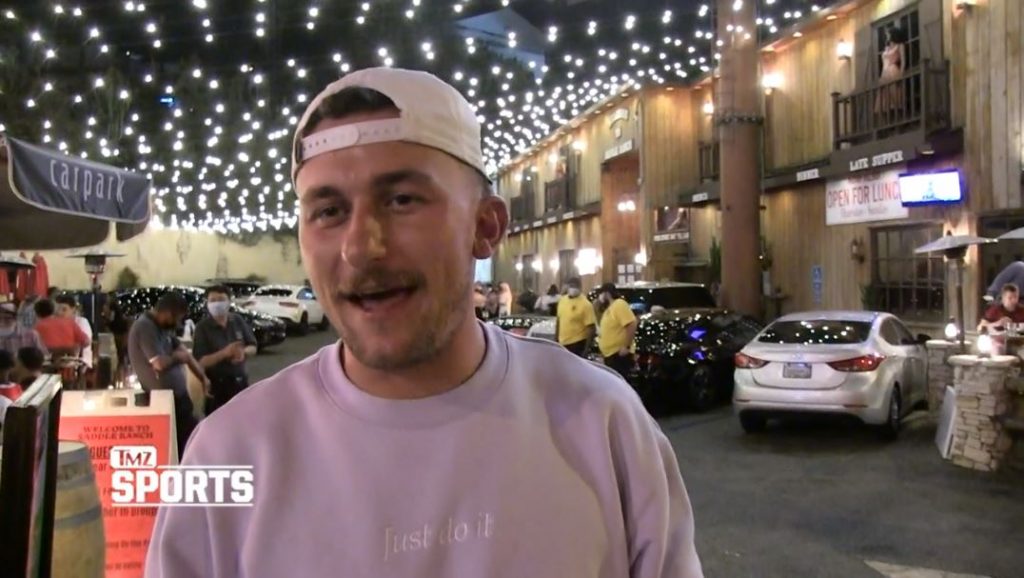 Johnny Manziel talks the Rock and the XFL.

In September 2020, TMZ cornered John Manziel and asked him if he would consider playing in the XFL now that it was under new ownership.

Manziel responded, “You never say never, I’m still an athletic guy… but at the end of the day, let’s see where the rest of life takes me and we’ll go from there. Football for me is not at the forefront of my mind. It’s just chillin’ and being one of the bros.”

There was no response from the new XFL ownership group. Basically, they were not ready to talk about hiring specific players at this time, as we would later learn their version of the XFL won’t hit the field until 2022.

Most recently, we have learned that Manziel will hit the field again with the Fan Controlled Football League, an arena football-style league planning to kickoff in February 2021. Billed as starting quarterback of the “Zappers,” Manziel will attempt to prove he still has what it takes to be a football star.

This is a big moment for Manziel, as it is the first chance to show his skills and athleticism since being knocked out of a Memphis Express game.