The Dallas Renegades announced that they are promoting Jeff Jagodzinski to offensive coordinator after Hal Mumme suffered his leg injury against Houston. 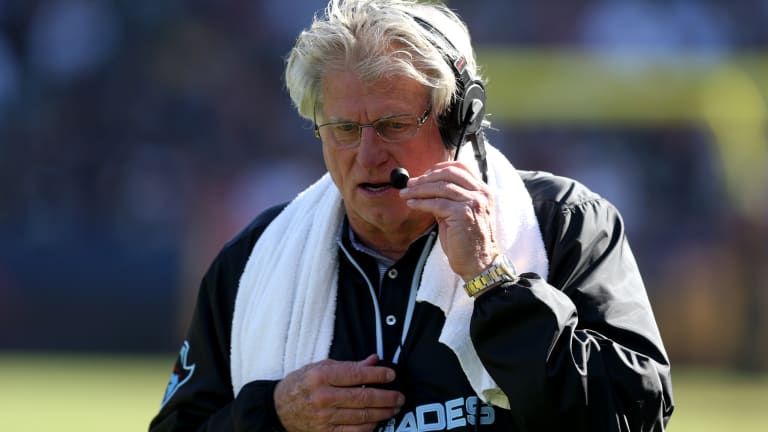 Due to a leg injury incurred during a game, Dallas Renegades offensive coordinator Hal Mumme had to step down. (Credit: XFL.com)

“We appreciate Hal’s hard work and efforts with our squad, particularly after his injury last weekend,” noted head coach Bob Stoops. “Unfortunately, it prevented him from performing in the way we needed for the Renegades.”

Mumme was in the coaching booth Saturday in the loss to the New York Guardians as he was calling the plays there. He made headlines when he decided to stay on the sidelines the whole game after a Renegades player collided with Mumme during the Houston game that broke his leg.

Jagodzinski is no stranger to running offenses as he was previously an offensive coordinator for the Green Bay Packers, Tampa Bay Buccaneers, and Georgia State. He’s well known for his stint as head coach for Boston College where he want 20-8 as the head coach in two seasons.

A lot of the focus on this season has been the inconsistency of the offense and how they have gotten off to slow starts throughout the season. Jagodzinski and Blizzard will have their work cut out for them as they travel on the road this weekend to take on the 3-2 DC Defenders. A game that could be seen as a season-defining moment for a team that has lost three straight at home, but undefeated on the road this season.