In his latest game with the Roughnecks, Butler carried the ball 7 times for 72 yards, averaging 10.3 yards per carry. 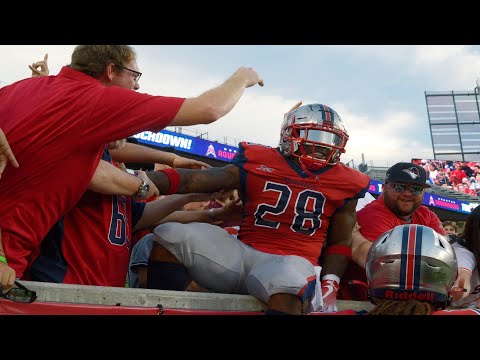 James Butler, a native of Wheaton, Illinois, and a graduate of the St. Francis High School football program, played college football with the University of Nevada Wolfpack.

After college he was signed as an undrafted free agent to the Oakland Raiders. However, Butler did not see a regular season game, and in fact, he was cut by the Raiders four times. They must have liked him, because they kept bringing him back, but Butler never saw any significant playing time with the Raiders.

After the Raiders, Butler even had a short stint in the CFL, but the prospect of a pro football career eluded him until January 2020 when he received a call from the Houston Roughnecks of the XFL.

In fact, James Butler had just finished a workout for the Green Bay Packers, and was in Green Bay airport when he received the call. Still, Butler jumped at the chance to join the Roughnecks, who had already started their pre-season training camp.

Fast forward to Week 3 of the XFL, and James Butler is the number four rusher in the XFL with 130 yds and two touchdowns. In his latest game with the Roughnecks, Butler carried the ball 7 times for 72 yards, averaging 10.3 yards per carry.

When told his stats, Butler was surprised by the numbers.

“I was trying to make the most of every opportunity,” he said.

“A lot of guys in my same position are getting that opportunity that we wouldn’t have if it wasn’t for the XFL giving all these guys an opportunity. And as you can see a lot of guys are starting to flourish from the XFL,” James explained. “As you can see the whole world is watching, so it’s just awesome that guys like me can just take advantage of these opportunities that we’re given.”

And Butler seems to be making the most of his XFL opportunity. His performance is even more surprising since he is part of an offense that is better known for its passing game. As it is turning out, having a potent running game is making the Roughnecks even more powerful.

Butler modestly described the Roughnecks as an all-round great team.

“Great quarterback, great receivers and you know, coach June, dialing up the plays. An, you know our defense has really been stars too. So, I just felt like we’ve done really well as a collective,” Butler said.

Being on a successful pro-football team is fun for Butler. He spent Monday morning on a local morning show, “Wake up Houston,” and he said he enjoys being in the spotlight, but he quickly deferred to the fact that the entire team is enjoying the attention Houston has been giving them.

Thanks to @XFLRoughnecks President, @bmcsportslaw & @jamessbutler20 for joining us on the @FOX26Houston Morning Show. Butler says he wants to see you in Arlington on Sunday! pic.twitter.com/gIP4aQ3ICO

“I feel like this whole team is in the spotlight. It’s awesome that we have a whole team of guys who are just doing great things and making the most of the opportunities,” he said. “We’re still just trying to go out and win every game, win as many games as we possibly can, and just take advantage of these opportunities, because we know how many eyes are now on this team.”

Houston fans have embraced the Roughnecks, and they have literally embraced Butler since he has made a habit of jumping into the stands after he has scored a touchdown.

“It’s called the ‘Houston Hop’,” James said. “We also want the people watching the game and at the game to have a blast. I really feel like that’s a way to really get people involved.”

The fans seem to love it.

We’re offering a 3️⃣ game season ticket bundle for only $60. Get yours today!