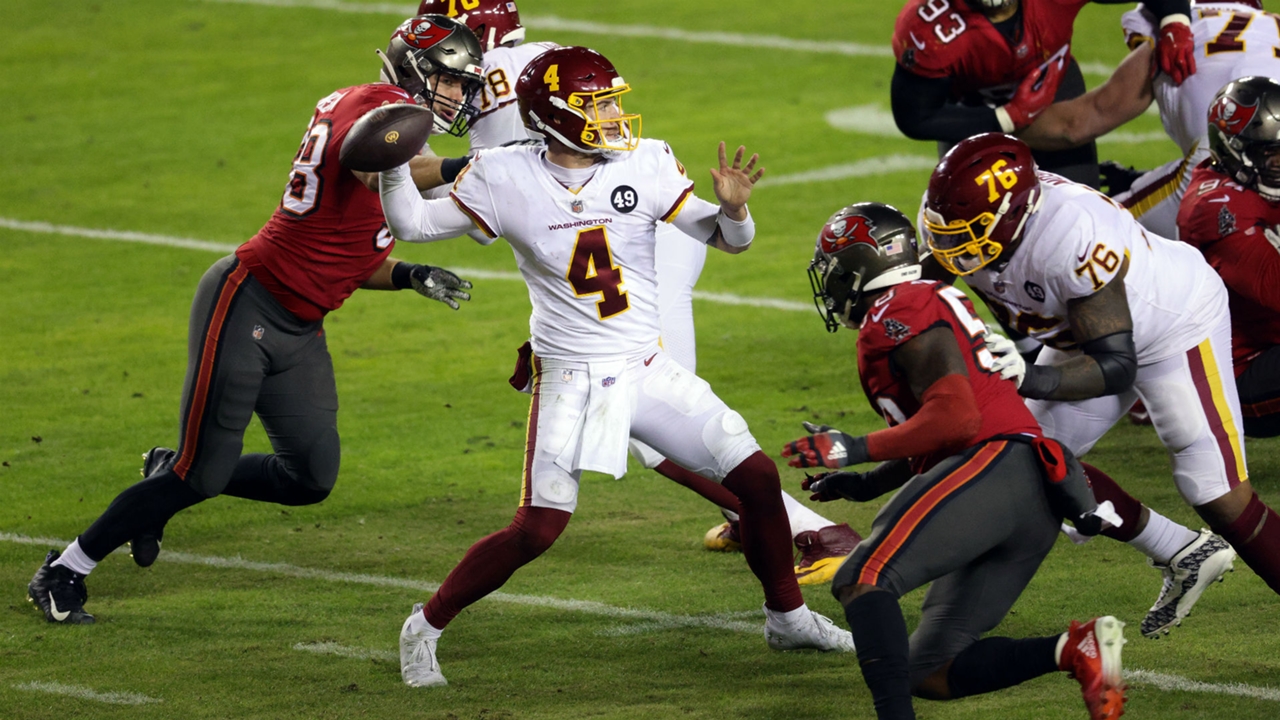 While much of the focus on the XFL of late has rightfully been looking ahead to the 2023 kickoff, it’s important to remember those who played in the league in 2020 and are still alive and kicking in the NFL. There were several players from that brief five-game season nearly three years ago on NFL rosters in 2022: Eleven ended the regular season on 53-man rosters (two more were on injured reserve), while five were on active practice squads (and one on the practice squad injured list).

This is the third year I’ve put out this column – last year’s analysis, with links to all parts, can be found here. As usual, we’ll start with players who ended the season on rosters of non-playoff teams. Thanks to overthecap.com for cap information, and Pro Football Focus for additional stats.

In 2022: Beginning the season listed as the backup center on Cleveland’s initial depth chart, Dunn was active for the first eight games. He was even credited as starting two as an extra blocker. However, Dunn suffered a back injury in November and was placed on injured reserve on November 19. It’s where he remained for the rest of the season.

What PFF tells us: Despite being listed as Cleveland’s backup center, he never actually played the position in 2022; instead, 80 of his 82 offensive snaps were when he was lined up in-line as an extra blocker. Because of this, 82% of his snaps came on run plays. He also took one snap each at right and left tackle. His overall offensive grade was 61.1, with 79.5 as a pass blocker and 61.5 as a run blocker. Dunn also had a place on special teams, playing 38 snaps on the field goal/extra point unit.

2023 outlook: Back injuries for offensive linemen can be tricky; provided he’s healthy, expect him to re-sign with the Browns as a restricted free agent. If Cleveland opts to go a different direction, Dunn should be able to land in a camp with another team.

In 2022: After averaging a healthy 4.5 yards per carry on more than 20 presesaon rushes, Walter was signed to Las Vegas’s practice squad a day after being let go at final cuts. He stuck on the practice squad all season, though he was never elevated to the active roster for a regular season game. Walter was one of several players Vegas signed to a reserve/futures contract last week.

2023 outlook: Though he was the only running back signed to a futures deal, Walter is behind six others at the position on the offseason roster, three of whom were rookies last year. The top two on the depth chart, Josh Jacobs and Ameer Abdullah, will become unrestricted free agents in March. Even so, it may be difficult for Walter to leap the 2022 rookies in camp next year.

In 2022: Washington’s rollercoaster situation at quarterback in 2022 matched its rollercoaster of a season as a whole. Carson Wentz, fresh off an offseason trade from the Indianapolis Colts, began the year as the team’s starter. Heinicke took over in late October when Wentz landed on injured reserve. He performed so well, putting Washington in position to earn a playoff spot, that he retained the starting role once Wentz became healthy. By the end of the season, Washington was in complete disarray. Wentz replaced an ineffective Heinicke in Week 16 and was named starter in Week 17. He tossed three interceptions in a loss that helped eliminate the Commanders from playoff contention. Wentz was benched once again in the final week in favor of fifth-round rookie Sam Howell. Heinicke finished the year 5-3-1 as a starter, with a 62.2% completion percentage. He threw for 1,859 yards, 12 touchdowns, and six interceptions. He added 96 rushing yards and one score on the ground.

What PFF tells us: While Heinicke’s counting stats look good, his PFF grade: not so much. Heinicke finished 37th out of 38 qualifying quarterbacks (and behind Wentz) with a 49.8 overall grade, broken down to 48.9 passing and 56.1 rushing. One place where Heinicke did have success was on play-action: He owned a 73.0 grade on those concepts, with just a 38.4 on non play-action passes. Interestingly, Heinicke’s far-and-away best-graded game was against one of the best defenses in the NFL, the Philadelphia Eagles, where Heinicke registered a 73.7 in Washington’s Week 10 upset win, handing Philly its first loss of the season.

2023 outlook: Heinicke is an unrestricted free agent this offseason. Washington figures to completely retool its quarterback room and it wouldn’t be a surprise if Heinicke isn’t in the plans for 2023. That said, Heinicke showed enough to prove he’s a capable backup in the NFL and will likely find work elsewhere if it comes to that.

In 2022: Daly completed his second season as Detroit’s long snapper. He played in all 18 games and snapped on 52 punts and 80 field goals/extra points.

What PFF tells us: While Daly did not register a tackle in punt coverage, he was credited by PFF with a single missed tackle. His grade was a 32.1, down from a 66.4 in 2021.

2023 outlook: Daly is an exclusive rights free agent in 2023, meaning if Detroit extends a qualifying offer, he is unable to negotiate with other teams. Expect Daly back in Motown next season.

In 2022: Smith was waived at final cuts on August 30 and re-signed to Detroit’s initial practice squad. In Week Five, he was elevated for a game against New England. Smith started the game at safety and made a tackle on the first snap of the game. On the second snap, he suffered a scary neck injury and had to be taken off the field in an ambulance. He ended up having fusion surgery and spent the rest of the season on the practice squad injured list.

What PFF tells us: Smith could only be graded on his two defensive snaps, but PFF had him at 74.6, with 60.0 being average.

2023 outlook: Smith himself said he expected to face a five-month recovery period and to be ready for OTAs. That seems awfully ambitious for neck fusion surgery. He was not a part of Detroit’s first wave of reserve/futures signings, though the Lions may be waiting to see how Smith’s recovery goes before bringing him back for 2023.

In 2022: As bad as Washington’s quarterback woes were in 2022, Carolina’s weren’t much better. The thought was their offseason acquisition of Baker Mayfield would solve Carolina’s problems at the position, and potentially push Walker off the roster. However, a season-ending injury suffered by rookie Matt Corral in the preseason opened the door for Walker to sneak in as the third quarterback. Backup Sam Darnold was also injured during an exhibition game and placed on I.R. in early September, leaving Walker as the direct backup to Mayfield to begin the regular season. Mayfield then got hurt in Week Five. Walker started Weeks Six and Seven, playing so well against Tampa Bay that a healthy Mayfield backed Walker up for the next three starts. Mayfield returned to start in Week 11 but in early December requested a trade. In Week 12, Carolina turned to Darnold, who had been activated off I.R., over Walker. Darnold started the rest of the season. Walker finished 2-3 as a starter with a 59.4% completion percentage, 731 yards thrown, three touchdowns and three interceptions.

What PFF tells us: It was a season of highs and lows for Walker, whose 94.9 game grade against Tampa Bay was one of the highest for any QB on the season. But his lows were really low, including a 27.9 against Cincinnati in a game in which he was eventually relieved in favor of Mayfield. Walker’s final overall grade was a 64.4, broken down to 60.3 passing and 76.6 rushing.

2023 outlook: A restricted free-agent this offseason, Walker could be non-tendered by Carolina. Matt Corral returns, but Mayfield is gone and Darnold is an unrestricted free agent. The Panthers need a head coach along with a starting quarterback; they’ll pick ninth in April’s NFL Draft, which could put them out of range for the top QBs. Teams prefer their backup quarterbacks to be a little more consistent than Walker has shown, so while he’s likely to make it to training camp with a team next summer, he may not be guaranteed a second-string spot.

In 2022: Gates was signed by Chicago in August following a successful stint in the USFL. After impressing in preseason action, Gates was signed to the team’s practice squad after final cuts. He spent the year on the practice squad before being promoted to the active roster late in the year due to injuries at the linebacker position. Gates ended up playing in three games, making an assisted tackle on defense.

What PFF tells us: Gates played just two snaps on defense all year, but played 35 on special teams, 21 of them on the kick return team. He accumulated a 69.0 grade for his special teams work.

2023 outlook: An exclusive rights free agent this offseason, Gates will be on the older side (27) for an ERFA signee. Four Bears linebackers will be unrestricted free agents, so there is a path for Gates. However, he may be destined to be the football equivalent of a AAAA player – good enough to stand out in the lower levels like the USFL and XFL, but someone who will continue to struggle to find a permanent home on an NFL roster.

In 2022: A favorite of his former college coach Matt Rhule, Thompson once again made Carolina’s practice squad following training camp. He spent the entirety of the season there without being elevated to the active roster.

2023 outlook: Rhule’s midseason firing makes Thompson’s future in Carolina unclear. He has yet to be signed to a reserve/futures deal by the Panthers and may have to latch on elsewhere to continue his NFL career. A return to the XFL or a stop in the USFL is not out of the question.

In 2022: Kuntz snapped on all punts and field goals/extra points in Pittsburgh for the second year in a row. He was credited with one special teams tackle, in Week 16 against Las Vegas.

What PFF tells us: Kuntz graded slightly higher than Scott Daly at a 37.0 on 139 special teams snaps. His highest-graded game was an 82.2 against the Raiders; his lowest was 28.3 against Carolina.

2023 outlook: Kuntz is an ERFA this offseason and still comes relatively cheap, so bet on him being Pittsburgh’s long snapper again in 2023.

In 2022: Another player signed to Carolina’s practice squad following final cuts, Robinson lasted just a few days there before being released again on September 2. He took workouts with other teams as a free agent, but ended up re-signing with the Panthers about a month later. He was waived again on November 15, but re-signed a week later. Robinson finished the season on Carolina’s practice squad. He did not see regular season action.

2023 outlook: Robinson was scooped up by the Pittsburgh Steelers after the season, inking a reserve/futures deal with them. If he makes it to training camp, he’ll be in the same back-of-the-roster fight he would’ve been in had he re-upped with the Panthers.