Overall, twenty-two of the 42 players added to the Houston Roughnecks roster through the inaugural XFL Draft have been on active NFL rosters in their careers. Twelve of those players played multiple seasons in the NFL.

Overall, twenty-two of the 42 players added to the Houston Roughnecks roster through the inaugural XFL Draft have been on active NFL rosters in their careers. Twelve of those players played multiple seasons in the NFL. 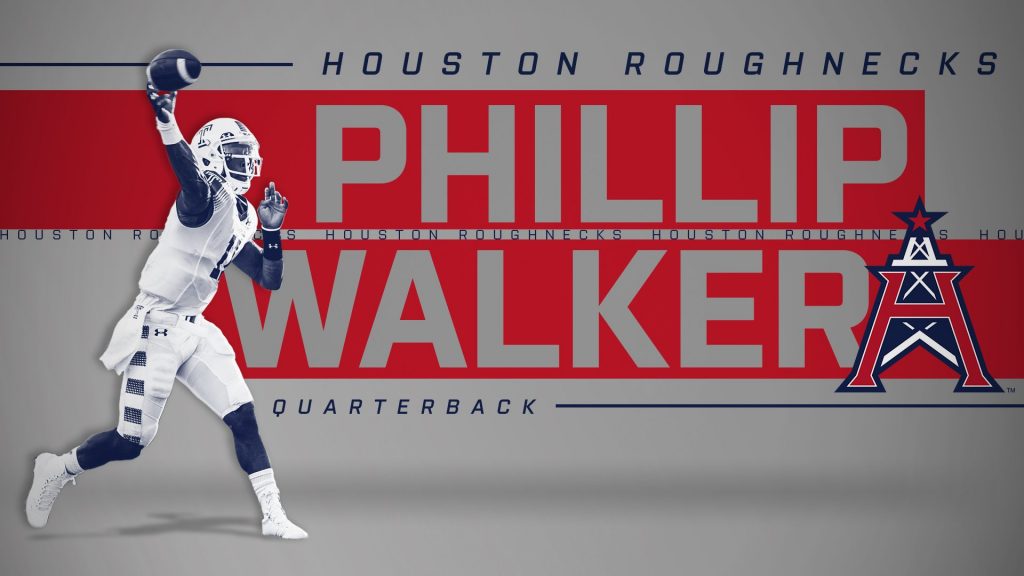 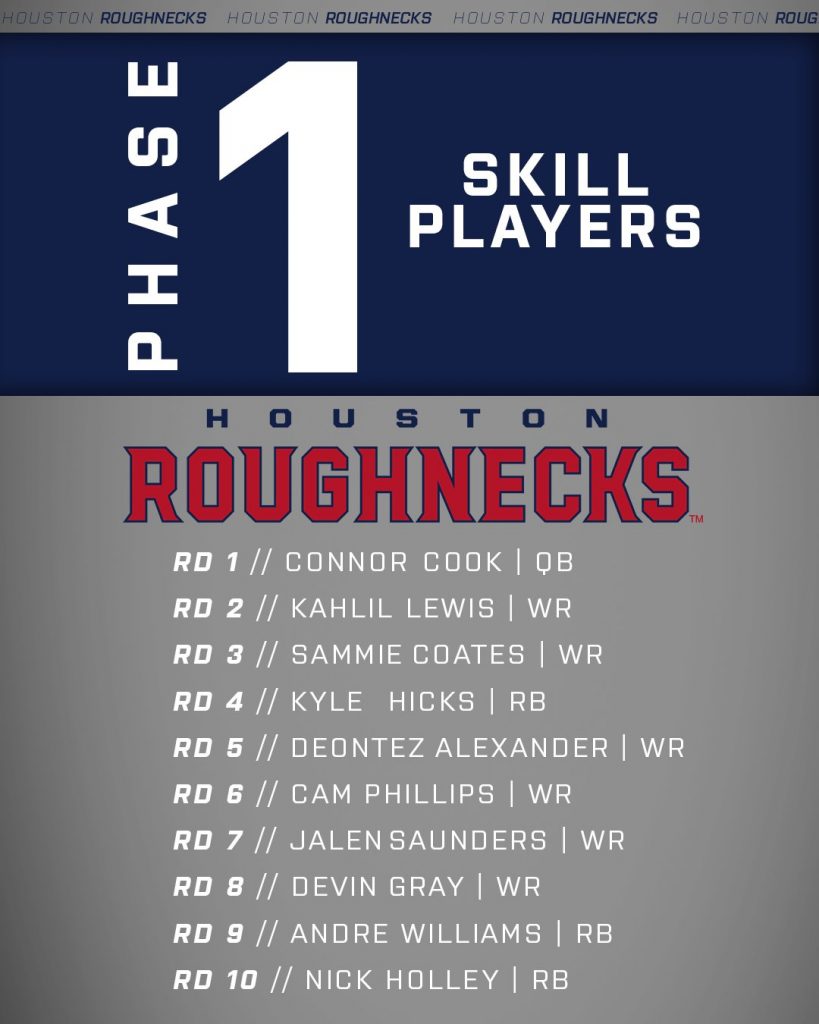 Connor Cook: An experienced and productive college quarterback at Michigan State, Connor Cook was drafted in the 4th round by the Oakland Raiders in 2016. Cook is a well-versed pro-style quarterback who consistently displays the footwork, timing and crispiness in his fundamentals as a high quality quarterback. He has ample arm strength to finish throws on the perimeter and down the field, and has the toughness to stand tall and drive the ball regardless of pressure around him. Cook’s experience, confidence and decisiveness make him a reliable, rhythm passer for an XFL offense.

Sammie Coates: He played college football at Auburn, where he played in the 2013 SEC Championship Game and 2014 BCS National Championship Game, and was drafted by the Pittsburgh Steelers in the third round of the 2015 NFL Draft. He spent four seasons in the NFL, including 12 games with the Texans in 2018.

Cam Phillips: Wide Receiver who played college football at Virginia Tech. Signed with the Buffalo Bills as an undrafted free agent on in May 2018. He was waived on September 1, 2018 and was signed to the practice squad the next day. He was promoted to the active roster on October 18, 2018. He was waived on November 5, 2018 and was re-signed to the practice squad. He signed a reserve/future contract with the Bills on December 31, 2018, but waived by the Bills in August 2019

Jalen Saunders: Earning All-WAC honors at Fresno State and All-Big 12 honors at Oklahoma as a slot receiver, Jalen Saunders had stints with five NFL teams before posting 1,909 receiving yards in two season in the CFL. Developing into a more multiple threat as a hybrid inside-outside receiver as a professional, Saunders’ greatest trait still remains his catch-and-run ability. With high-quality instincts and athleticism, he displays the ability to change the game with big plays on both offense and special teams.

Kyle Hicks: The first running back selected by the Roughnecks. A former TCU Frog, he was an Honorable Mention All-Big 12 selection in 2016.

Devin Gray: Wide receiver who played college football at Cincinnati.  Signed with the Atlanta Falcons as an undrafted free agent on May 1, 2018. He was waived on September 1, 2018 and was signed to the practice squad the next day. On August 31, 2019, Gray was waived by the Falcons, but he was re-signed to the Falcons practice squad on October 23, 2019, making him a maybe for the start of the XFL training camp.

Andre Williams: He played college football at Boston College, where he was a finalist for the 2013 Heisman Trophy, and won the 2013 Doak Walker Award as the nation’s best running back. During the 2013 season, Williams became only the 16th player in NCAA history to rush for over 2,000 yards and he finished his college career ranked 5th all-time for most yards rushed in a single season with 2,177 yards. Drafted by the New York Giants in the fourth round of the 2014 NFL Draft. 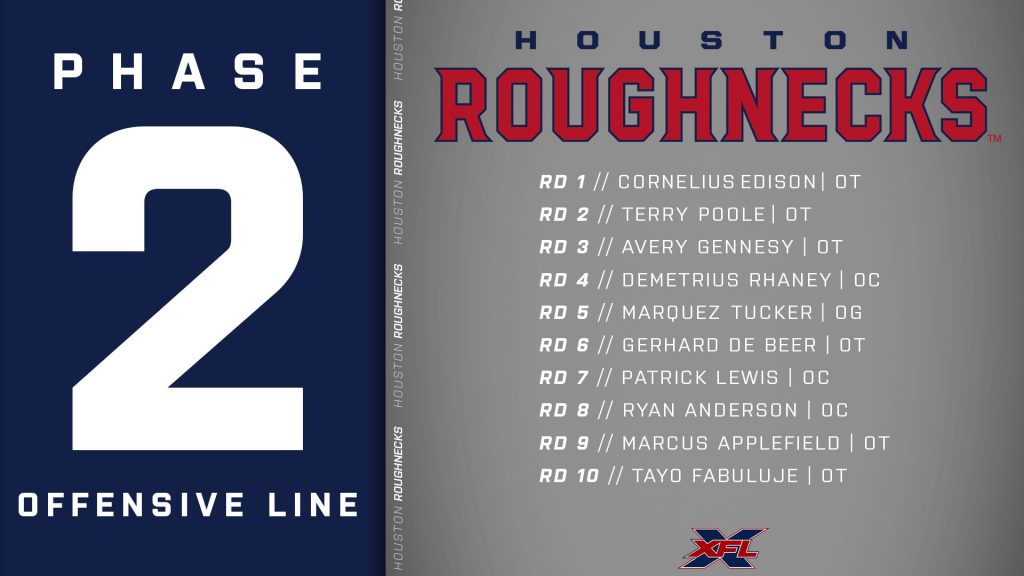 Cornelius Edison: Played college football at Portland State and was signed by the Chicago Bears as an undrafted free agent in 2015. Also appeared on the Falcons and Vikings roster.

Terry Poole: A former JuCo transfer, Terry Poole started 25 games at San Diego State before being drafted by the Seattle Seahawks in the fourth round of the 2015 NFL draft. Spending three years in the league, Poole eventually found himself back in San Diego with the AAF, where he started eight games at tackle. Poole’s measurables and rhythm in pass protection are strengths, as are his lateral quickness and hand placement.

Demetrius Rhaney: Analysis: Best suited in a zone-blocking scheme, Demetrius Rhaney played two years at Tennessee State and was drafted by the Los Angeles Rams in the seventh round of 2014. After five years in the NFL with three teams, Rhaney developed into a full-time starting center in the AAF. The high-effort player generates a lot of lower body power and moves well vertically with strong, choppy steps.

Gerhard de Beer: Offensive tackle who played college football at Arizona. Signed by the Buffalo Bills as an undrafted free agent in 2018. He most recently played for the Green Bay Packers.

Patrick Lewis: Center who played college football at Texas A&M. Lewis was signed by the Green Bay Packers as an undrafted free agent in 2013. In the 2014 season, he played in six games for the Seahawks, who kept a 4-0 record with Lewis as starting center. Lewis was not named the starting center before the 2015 season. However, he regained the starting job from Drew Nowak prior to Week 10.  On January 12, 2019, Lewis was signed by the Arizona Hotshots of the Alliance of American Football.

Tayo Fabuluje: Offensive tackle who played in the 2012 season for TCU. He was originally drafted in the sixth round of the 2015 NFL Draft by the Chicago Bears. 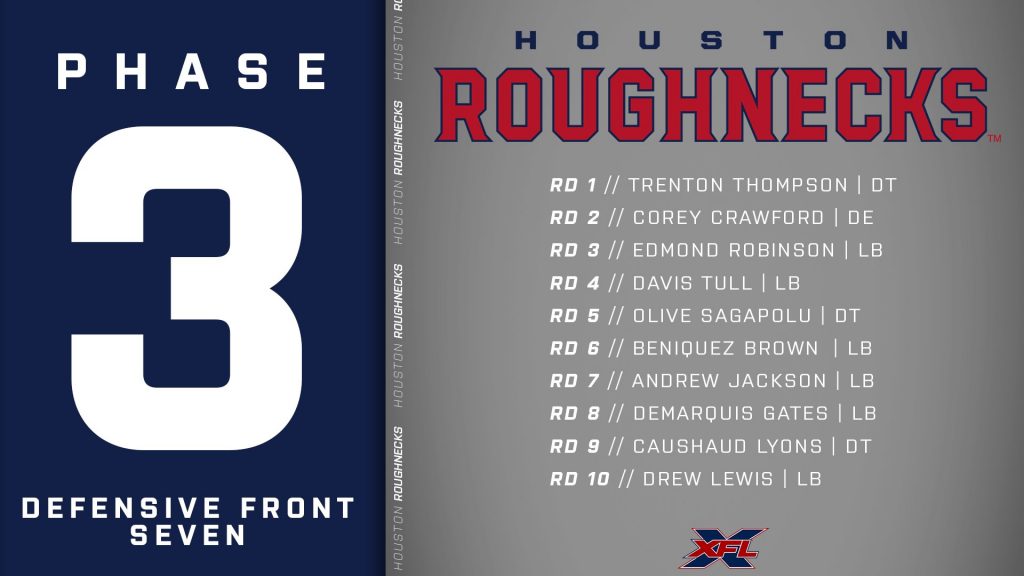 Trenton Thompson: Defensive tackle who played college football at the University of Georgia. Thompson graduated from Westover Comprehensive High School in Albany, Georgia, where he earned All-USA Defensive Player of the Year honors by USA Today. Scouts compared him to All-Pro defensive tackle Ndamukong Suh. He was signed by the Cleveland Browns as an undrafted free agent in 2018, but later released. Signed by the Arizona Hotshots of the Alliance of American Football on January 18, 2019. After a four tackle performance in a 38-22 week 1 victory over the Salt Lake Stallions, Thompson was named by Pro Football Focus to their Week 1 AAF Team of the Week. After the AAF ceased operations in April 2019, Thompson signed with the Washington Valor of the Arena Football League, and later briefly signed by the Edmonton Eskimos of the Canadian Football League, but released just prior to the 2019 season.

Edmond Robinson: A linebacker who played college football at Newberry. He was drafted by the Minnesota Vikings in the seventh round, 232nd overall of the 2015 NFL Draft. He was the first NCAA Division II player to be selected in that year’s draft. Started in week 15 in a loss against the Arizona Cardinals and was credited with one tackle and a pass defensed.  A week later in the Vikings’ blowout win over the New York Giants, he recorded five tackles despite playing just six snaps on defense. After being cut by the Vikings, and moving from the New York Jets to the Arizona Cardinals, he was signed with the Arizona Hotshots of the Alliance of American Football for the 2019 season.

Davis Tull: A linebacker who played college football at University of Tennessee-Chattanooga. He was drafted by the New Orleans Saints in the fifth round of the 2015 NFL Draft, signed a 2.5 million dollar contract, but placed on injured reserve early in the season. Tull bounced from the Atlanta Falcons to the Saskatchewan Roughriders, to the LA Rams and finally to the Memphis Express of the Alliance of American Football.  In August 2019, Tull was signed by the Jacksonville Jaguars, but released with an injury settlement during final roster cuts on August 30, 2019. Later, he was suspended by the NFL for four weeks beginning on Oct. 19.

Beniquez Brown: Linebacker who played college football at Mississippi State. He was signed by the Green Bay Packers as an undrafted free agent in 2016, but released soon after. In 2018, Brown signed with the Birmingham Iron of the AAF for the 2019 season. 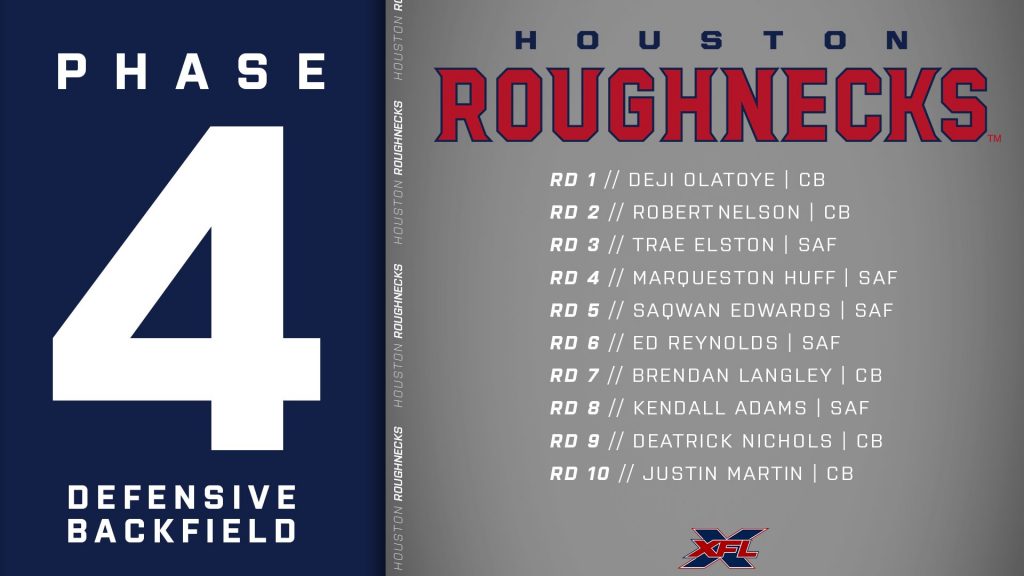 Deji Olatoye: Cornerback who played college football at North Carolina A&T. He was originally signed by the Baltimore Ravens as an undrafted free agent in 2014, and appeared on the rosters of the Chiefs, Cowboys, Falcons and Buccaneers before joining the Orlando Apollos of the Alliance of American Football in 2019.

Robert Nelson: Undrafted out of Arizona State, Robert Nelson played in 20 career NFL games. He is a quick, sudden athlete with good play speed to stay in phase with receivers downfield. He shows good burst to the ball in zone coverage and flashes playmaking skills when he trusts his instincts.

Trae Elston: Safety who played college football at Mississippi. Signed by the New Orleans Saints as an undrafted free agent on May 2, 2016.  Moved through the rosters of the Bucaneers, Browns, Bills, Eagles, Dolphins and Saints.

Marqueston Huff: Selected in the 4th round of the 2014 NFL draft by the Titans. He played 41 games as a rotational safety and cornerback in the NFL. He offers good range and physicality from the backend. His aggressive play has tone-setting potential.

Ed Reynolds: A 2013 First-Team All-American at Stanford and was selected in the 5th round of the 2015 NFL draft by the Eagles. He played in 16 NFL games, including 10 starts. He is a smart, instinctive safety with above average ball skills. He is a reliable tackler in the box or in space.

Brendan Langley: A 3rd-round NFL draft selection by the Broncos in 2017. He played 16 games over two seasons in Denver, primarily as a reserve defensive back and return man. The former college wide receiver possesses good ball skills. He has desired size and speed with strong upside as a zone corner.

Deatrick Nichols: A 3-time All-AAC performer at South Florida before signing with the Cardinals. He was a member of the team’s practice squad in 2018, appearing in 2 games. He has slot corner size and traits with good ball production. He plays sticky man coverage with desired range in zone. 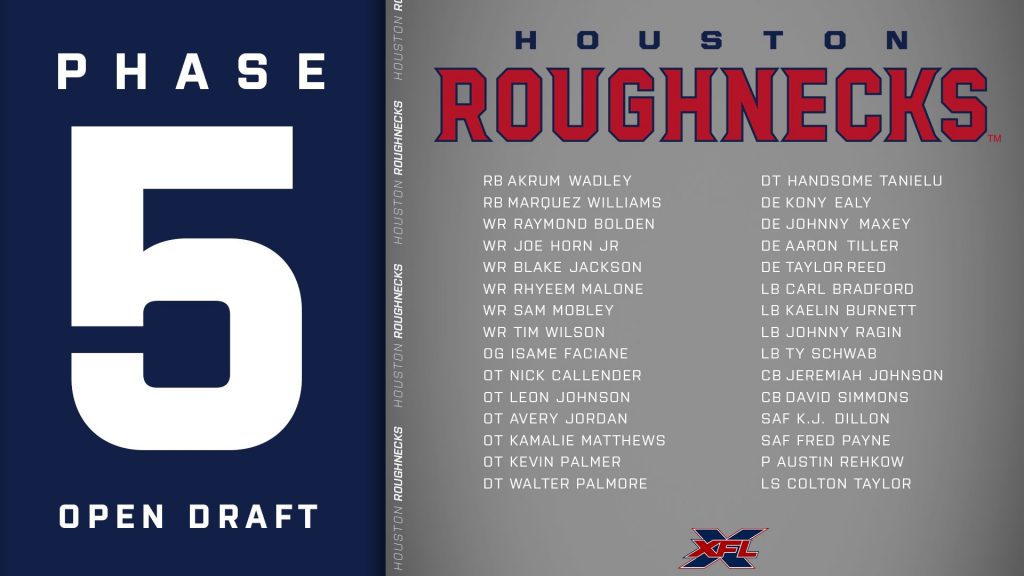 Akrum Wadley: Running back who played college football at Iowa. He was signed by the Tennessee Titans as an undrafted free agent in 2018.  In 2019, he signed with the Atlanta Legends of the Alliance of American Football.

Marquez Williams: Fullback who played college football at Mars Hill and the University of Miami. He was drafted by the Jacksonville Jaguars in the seventh round of the 2017 NFL Draft and has also played for the Cleveland Browns.

Blake Jackson: Wide receiver who played college football at Mary Hardin–Baylor. After going undrafted in the 2018 NFL Draft, Jackson signed with the Calgary Stampeders of the Canadian Football League, but released by the Stampeders at the conclusion of training camp. After attending The Spring League Showcase in La Jolla, California in July 2018, Jackson signed with the Cleveland Browns as a wide receiver on July 27, 2018, and elevated to the Browns’ active 53-man roster on December 28, 2018. Jackson was waived with an injury designation on August 2, 2019. After clearing waivers, he was placed on the Browns’ injured reserve list. He was later released with an injury settlement. \

Isame Faciane: A guard who played college football as a defensive tackle at Florida International and was signed by the Minnesota Vikings as an undrafted free agent in 2014. He went from the Vikings practice roster, to a reserve/future contract, and back to the practice roster. He was released by the Vikings on October 18, 2016 following a DWI arrest. Later, he spent time on the Bills and Dolphins rosters, and with the Iowa Barnstormers of the Indoor Football League

Kony Ealy: The former 2nd round pick had 28 sacks at Mizzou, 15 in the NFL, and holds several Super Bowl records. He was a lone bright spot in Carolina’s loss to the Denver Broncos in SB 50, with 3 sacks, a forced fumble, and an interception.

Carl Bradford: Lnebacker who played college football at Arizona State, and was drafted by the Green Bay Packers in the fourth round of the 2014 NFL Draft. He has also been a member of the San Francisco 49ers, Buffalo Bills, Chicago Bears, and Cincinnati Bengals of the NFL; the Saskatchewan Roughriders of the CFL; and the Arizona Hotshots of the AAF.

Austin Rehkow: Punter and placekicker who played college football for the Idaho Vandals football team at the University of Idaho. He moved through the rosters of the Bills and Giants without earning a starting position before he was signed by the Salt Lake Stallions of the Alliance of American Football as a punter.