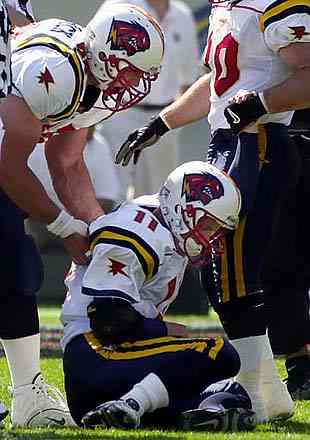 Brohm Down and Out. Will the absence of Jeff Brohm be the key to the Hitmen’s victory this Sunday? Photo: Associated Press.

New York – (24 March 2001) — Five weeks ago, not many supporters and followers of the XFL would have thought that an article about the Hitmen would start with the title that you see above. Five weeks ago at the Meadowlands, the Hitmen were 0 and 2 and coming off two brutal losses to the Outlaws and the Bolts. Their season had gotten off to a rocky start.

Orlando raged into the Meadowlands with full steam after starting the season with 2 straight wins. It was a must win for NY/NJ. The weather and the Hitmen defense were a factor through the first three quarters and much maligned quarterback Charles Puleri was yanked in favor of Wally Richardson. Richardson led NY to a 12-3 lead with 10 minutes left in the 4th quarter. The Hitmen were staring their 1st win right in the face. Reality blew up in their face in the final quarter as Jeff Brohm led the Rage back by scoring 15 unanswered points to steal the victory away from the Hitmen. The Rage left the Meadowlands unbeaten and the Hitmen fell to 0 and 3.

Five weeks later, the NY/NJ Hitmen have won 3 out of their last 4 games, and on Sunday in Orlando they look for their fourth in their last five. The Hitmen are now only 3 steps away from reaching the playoffs. At 3 and 4, NY has sole possession of the second playoff spot in the XFL’s eastern division. They are in the drivers seat but it’s do or die now.

The Orlando Rage are in the drivers seat, despite being 6 and 1, Orlando is coming off an embarrassing 31-6 defeat at the hands of the LA Xtreme. To add salt into the wounds their star QB Jeff Brohm is out for the season. Not all is lost for the Rage. They have clinched a playoff spot and they currently own home field advantage throughout the playoffs. With a win on Sunday, they can clinch the eastern division title and a home playoff game in the 1st round. The Rage return home Sunday to The infamous Citrus Bowl, where the Rage have yet to lose this season(4-0). The Rage also own an undefeated record against their eastern division rivals(3-0).

The playoff implications are huge for both teams and Chicago and Birmingham will be watching the game closely as they both will be rooting for the Rage to top the Hitmen for a 2nd time this season. LA will be rooting for NY as they are hoping that they can catch The Rage in the race for home field advantage.

-The game will be broadcast live on TNN, Sunday afternoon at 4pm eastern, hosted by Craig Minervini and Bob Golic

The Hitmen on Offense

Wally Richardson is 3-1 since becoming the starting quarterback for NY/NJ.

Wally is coming off a great comeback vs Memphis where he lead the Hitmen offense 65 yards for the game winning score.

Wally is the league’s best double threat, He’s completing 59 percent of his passes to go along with 6.1 yards a run.

Richardson is looking to avenge an early season loss to the Rage, which he feels responsible for.

The Rage defense may have the XFL’s best safety tandem in Corey Gillard and Omar Brown. CB Stephen Fisher is one of the league’s best corners, The Hitmen will need to try and exploit Orlando’s other starting corner, Kelly Malveaux. Malveaux has good speed but WR Zola Davis at 6’1 towers over the 5’8 corner. The Hitmen need to capitalize on that matchup. Orlando tends to play their talented safeties close to the line of scrimmage. This leaves the Rage corners on an island and NY needs to attack that area.

Fred Brock remains the starting WR opposite the red hot Zola Davis(23 receptions) despite the big play emergence of Kirby Dar Dar. Dar Dar has been instrumental in the Hitmen’s last two victories. Brock is questionable with an ankle injury. If he can’t go, Anthony Dicosmo(20 receptions) may start opposite Zola Davis because Dar Dar is used returning punts and kicks.

The Hitmen have employed a 4 and 5 Wideout set for the last 2 weeks and they will probably continue to run this formation to try and spread out the Rage defense. The Hitmen will also try to run at times from that alignment with RB’s Dino Philyaw and Joe Aska. Joe Aska leads NY in rushing and is averaging 4.2 yards a run. For some stupid reason, Aska is still not starting ahead of Dino Philyaw Aska’s presence in the 4th quarter last week aided the Hitmen’s victory. Michael Blair and Mike Archie are two versatile threats at both fullback and special teams. Archie has a nose for the goal line and has been used well in the slot at WR.

Starting guard David Camacho is doubtful for Sunday’s game. Robert Hunt has filled in nicely in his place. The Hitmen offensive line is playing better and T Curtis McGee may be the XFL’s best pass blocker. McGee faces off against James Roberson on Sunday. Roberson leads the Rage on the season with 4 sacks.

The Hitmen offense is only averaging 11.4 points a game. They rank 7th overall in offense. The Rage defense ranks in the bottom half of the league (6th).

The Hitmen on Defense

The last time the Rage and the Hitmen met, Orlando rushed for 149 yards. 64 of those yards came from Jeff Brohm. Brohm is out and in comes Brian Kuklick. Kuklick played well the first time he replaced Brohm against Memphis, He lead them to a 21-19 victory.

Last week, Kuklick replaced Brohm and failed to bring the Rage back against LA. The Hitmen will need to put pressure on Kuklick early. If rattled, Kuklick has a tendency to make poor decisions with the football.

The Rage will try to rely on their 3 headed running game Sunday. The 3 heads belong to Derric Clark, who has 311 yards on the ground and 5 TD’s, Brian Shay, who is averaging 6.4 yards a run and Michael Black who has over 200 yards on the ground this season. All 3 backs pose different threats and the Hitmen can not key in on just 1 running back Sunday.

Hitmen Defensive leader, MLB Ron Merkerson will have his hands full trying to stop the Rage running attack. The Hitmen boast one of the league’s finest defensive lines. Dwayne Sabb, Christian Maumalaunga and Israel Raybon have combined for 13 sacks in their first 7 games. Israel Raybon may not play due to a sprained ankle, that would hurt the hitmen defense. Henry Slay would replace Raybon in the middle. That’s a dropoff and the Rage will look to exploit that on the ground.

The Rage also boast an impressive 3 headed WR attack with Mario Bailey, Dialleo Burks and 1999 Arena League MVP Kevin Swayne. Burks has 24 receptions on the year with 482 yards and also has 4 td’s on the year.

The Rage start with a one back set and usually play without a fullback. The Hitmen will be forced into the nickel to cover this offensive formation as one of their linebackers will be forced to sit for most of the game. This offensive scheme creates problems for defenses because a LB goes out for a nickel back, what that does is take away a solid run defender from the line of scrimmage. Safeties can’t cover one of the Rage’s 3 recievers so defenses are forced to put a corner near the line of the scrimmage. The Hitmen are ranked 2nd in the league in defense and they are #1 against the pass, only allowing 139 yards passing a game. Cornerback Damen Wheeler has been a blanket outside and Joey Eloms has improved his play but he faces his toughest challenge this season. Safeties Brad Trout and standout Tyree Talton can cover and can tackle. Butler By Note and Donnie Caldwell come in on dime and nickel formations. They should see a lot of action on Sunday.

The Rage offense ranks 2nd in the XFL and they are averaging 23 points a game. Orlando has been nearly perfect in the red zone with an 88 percent scoring rate inside the 20. The Hitmen on average have given up only 15 points a game.

The Hitmen on Special Teams

Leo Araguz is the league’s coldest kicker. His punting average has been 41.7 yards but his kicks have lacked height on them and teams are getting good returns. Araguz is only 5 of 11 on field goals and just 3 of 9 from 30 yards or farther. Skinny Culver and Brian Shay are two dangerous returners who the Hitmen must game plan for on Sunday. Kirby Dar Dar continues to play well as both the Hitmen’s punt and kick returner. Orlando’s kicker/punter Jay Taylor may be the league’s best. He is averaging 42 yards a punt and is 5 of 7 on field goal attempts. The coverage team for Orlando has faltered the last two weeks as both Yo Murphy and Damon Gibson have run right through Orlando’s special team units.

QB Jeff Brohm is out, LB Jimmy Clements is also out with an ankle injury, DB Hassan Shammid Deen is questionable and Linebackers Patrise Alexander and Sedrick Clark are probable with knee and wrist injuries

G David Camacho is out with a knee injury, WR Fred Brock and DT Israel Raybon are both questionable for Sunday’s game with ankle injuries and DE Tim Beauchamp is probable with a groin injury

As of press time, Orlando is 7 point favorites over The Hitmen

Despite Jeff Brohm’s absence, This will be the Hitmen’s toughest challenge of the season. The Rage are a furious bunch right now who are looking to redeem themselves after last weeks embarrassing defeat at the hands of the Xtreme. NY GM Drew Pearson will continue his active role on the sidelines. NY/NJ is now 2 and 0 with Drew on the sidelines, they hope that they can get to 3 and 0 this Sunday on TNN.