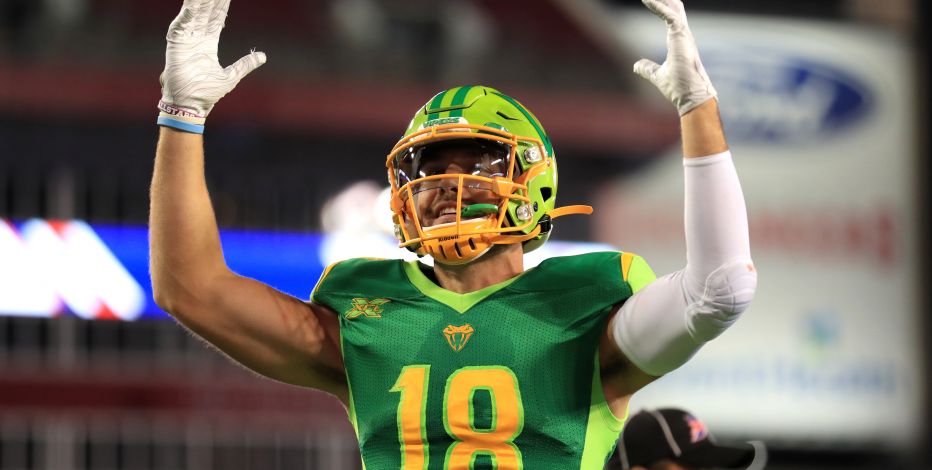 Former XFL Tampa Bay Viper wide receiver Reece Horn played college football at the University of Indianapolis at the Division II level , starting in all four years, and making his presence felt any time he stepped on the field as a Greyhound.

Starting out his redshirt freshman year, Horn came into the program and immediately made his presence felt and known, bringing in four touchdowns on 26 receptions, seeing action in all 13 games.

Horn’s sophomore year, he was handled in a much higher dose and with good reason. Catching 70 passes in 12 games for seven touchdowns and 877 yards. That averages out to be 12.5 yards per catch, theoretically a first down every single catch he brought in.

Junior year was no different, an absolute beast on the field was Horn. He passed the century mark in receiving yards for the first time with 1046 yards on 68 catches and a career-high 12 touchdowns, playing in 11 games. The average yards per catch he showcased equaled 15.4 yards on average every catch, that is stunning.

His junior year was also the first year he took up punt returning. Horn had 15 returns for 175 yards, an average of 11.6 yards per return

Before stepping into Horn’s senior season on the offense, let’s go over his crazy improvement on punt returns as a senior. On his 12 punt returns, he tallied 316 yards, for two touchdowns and a return for a long of 92 yards, that molds together for an average of 26.3 yards per return, wow.

That leaves us in his senior year on offense with one last chance to make another impact, he did, to say the least. Horn played in 12 games catching 108 passes for a whopping 1396 yards, eight touchdowns, and averaging 9.0 targets per game. The average yards a catch for Horn stayed above 10 with a 12.9. One last great stat to lay down is his 116.3 average yards per game his senior year.

Ace of the accolades

Accolades are just one word to describe Horn’s final two seasons, even as a sophomore he had three, 2013 All-GLVC First Team, 2013 University of Indianapolis Wide Receiver of the Year, four-time GLVC Player of the Week

Horn was signed by the Tennessee Titans as a undrafted free agent, however he only saw brief action as a Titan.

Horn would go to the Memphis Express of the AAF, and establish a name for himself there. Horn caught 28 passes for 429 yards, an average of 15.3 yards a catch, along with a touchdown. Including an eight catch affair against the Salt Lake Stallions for 129 yards. Also a seven-catch game against the Birmingham Iron for 113 yards.

After his great showing in Memphis, the Miami Dolphins briefly signed Horn.

Valiant as a Viper

Horn’s next stop after being selected in the eighth-round of the 2020 XFL Draft would land him in Tampa Bay as a Viper where he performed very well. Horn caught 27 passes for 240 yards, an average of 8.9 yards a catch, and a touchdown, he found the field in all five games.

In the opener against the Los Angeles Wildcats, he had nine catches 90 yards and a touchdown.

Horn really cemented himself in statistically in Tampa Bay, he has great endurance, speed, and just about everything that puts receivers in the NFL but he did not find a chance after the XFL. He certainly is plenty good enough to play at the next level.

At 27 years old, Horn is in his prime and hungry as ever, surely another professional football opportunity should be knocking on his door sooner rather than later if all goes to plan.

At 6’3, 215 lbs he is a tall and strong receiver, very similar to NFL veteran Larry Fitzgerald, a receiver who has been a menace to the league for almost two decades. Horn plays physically much like Fitzgerald too, would be awesome to see them line up together.

Reece Horn is one of the most slept on players of the entire XFL, his stats are more than good enough, so are his size and talent. We have discussed his steadiness dating back all the way to his Greyhound days all the way up to the present day.

Horn is worthy of an NFL roster. Any time his number is called, he shows and proves himself.