Graubard and Kendrick: Two players waiting for a shot in the XFL

Make sure that Ethan Graubard and Peyton Kendrick stay on your mind for XFL 2022. 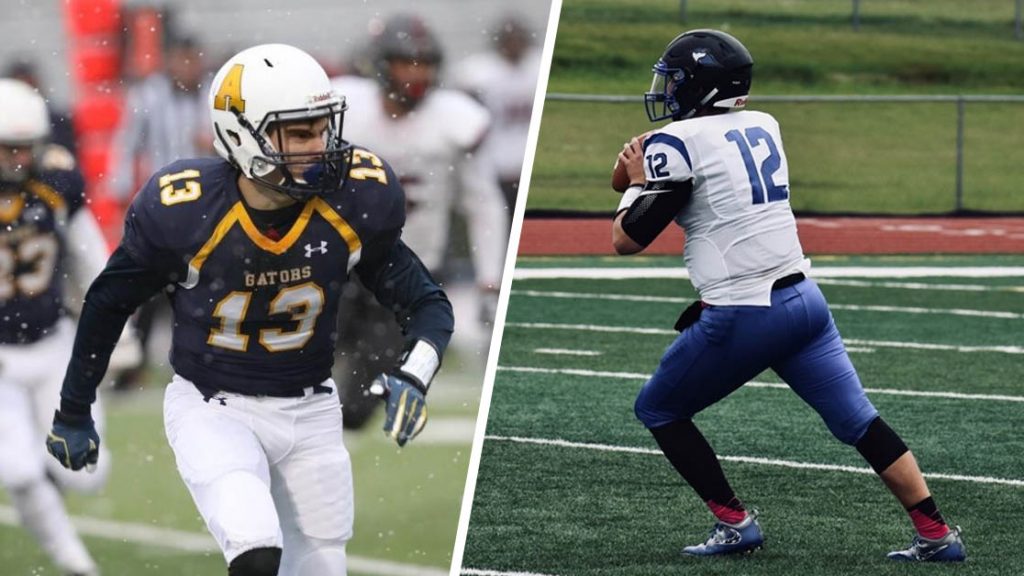 Ethan Graubard (left) and Peyton Kendrick (right) are both working hard for a football opportunity.

As many players loved playing in the XFL, and spoke highly of how it was run. Now, under new ownership from The Rock and Dany Garcia, that brings, even more, hope and optimism that the XFL be continued to be managed the correct way.

With that being said, NFL teams aren’t seeming to have many openings this year due to the strict COVID rules, so players are staying ready, and one of the main spots they are staying ready for is an XFL shot when the league commences in 2022.

These are just some of the players waiting to hear their name called in a potential XFL Draft.

“Outwork your potential.”- @kobebryant Shoutout @JT_Jr13 for putting this together! Full link in my bio pic.twitter.com/IB0r3edywD

Graubard always plays with a full heart and hustle every single play. The Allegheny College product is a swiss army knife to say the absolute least.

“I can play any position in the defensive backfield, also every special team position. I am also able to RB/WR if a team needed me too!” Graubard said. “My ability to play different positions separates me. Also, my film study allows me to designate plays based on formation and keys so that I am able to anticipate a play happening, and make a play.”

If you watch his film, it can be seen how much he puts in. At 6’0, 190, that can help him fit into just about any position, that is a perfect size for the modern-day football player. To maintain his body, he treats it like a well-oiled machine, “I train at Varsity House Gym 5 days a week working on speed, strength, power, and performance. I also go to the field 1-2 days a week to work on position-specific work, and run one on ones with other pro guys.” Graubard said.

Graubard never lets noise get to him, and always keeps a level head. “My internal drive motivates me. I try not to have outside noise dictate my ambition,” Graubard replied on how he stays motivated.

Graubard is a player that you can count on at any position whether that be on special teams, defense, or even offense, that goes back to the swiss army knife adage. He is like Taysom Hill but even more useful, as he can play on the opposite side of the ball as well. Graubard is someone who puts in the grind and deserves a chance.

.⁦@kendrick_peyton⁩ is easily one of the most underrated quarterbacks in the entire class of 2020. Peyton Kendrick should really be on a pro squad. ⁦@NFL⁩ ⁦@xfl2022⁩ ⁦@NALFootball⁩. pic.twitter.com/JORfo3ZCp7

Peyton Kendrick is a quarterback who played at Northland CTC, Minnesota West Technical and Community College, as well as Western New Mexico. At 6’1, 225 Kendrick has the measures of a prototype professional quarterback.

He played his college career at the JUCO level, which is amazing to see him rise up and be great.

“Playing JUCO was the best experience for me! It humbled me and made me hungrier than ever,” Kendrick said.

As a freshman at Northland CTC, he really showcased himself. The young quarterback passed for 1551 yards, and 19 touchdowns in nine games. Kendrick then transferred to Minnesota West.

During his time as a Blue Jay at Minnesota West, he really looked dominant. Kendrick completed over half his passes (55.3%). He passed for 23 touchdowns in eight games, along with 2301 pass yards, that’s an average of 287.6 per game.

“I say my best life experiences came from my time at Minnesota West. And it helped me grow as a player and a man,” Kendrick remembers.

After Minnesota West, Kendrick took his talents to Western New Mexico University. He did not see the field as much as he deserved as a Mustang, but his stats the previous years are very good to look at alone.

With that being said, Kendrick has a lot of great unmeasurable traits, such as being a smart quarterback, and a great leader.

“I would say my leadership stands out the most. Yes, I am very accurate and have a strong arm. But leadership and great football IQ at the quarterback position is what gets the job done and wins you football games,” Kendrick stated.

There were many good quarterbacks in the XFL, Kendrick was an avid follower of the XFL as well in which he studied the best quarterback in the league PJ Walker.

“My favorite XFL team to watch and learn from was the St. Louis BattleHawks! They were very talented and exciting with the variety of plays and players they had. I also rooted for Houston Roughnecks because being a QB how could you not love PJ Walker and his play,” Kendrick said.

Kendrick is making sure he is staying fresh and ready for that professional call. “I am staying ready by grinding the weights, running, and playing on a semi-pro team in the town I currently live. I eat, sleep, dream football, so watching on Sundays taking notes of people at my position is a must for me,”  Kendrick replied.

Kendrick is always motivated, which leads us to find what keeps him so motivated.

“My biggest motivation by far is my fiancé! Taylor has also held me down and picked me up when I needed it the most. She is an incredible woman and is solely the reason I am the man I am now. She is always my number one fan while being my biggest critic. Without her, I have no idea where I’d be,” Kendrick acknowledged.

Why do they deserve a chance?

Both of these players put their full heart and passion into each play. Even off the field, they are both striving to get better in any way that they can. Make sure that Ethan Graubard and Peyton Kendrick stay on your mind for XFL 2022. This league is made for grinders like these guys.

No matter what level of college that you play, if you have the talents, the opportunity will find you. The key is never to give up on the dream and keep fighting. The Rock is a prime example of what he speaks, he had just seven dollars in his pocket after a CFL stint, now he is one of the most successful men in America.