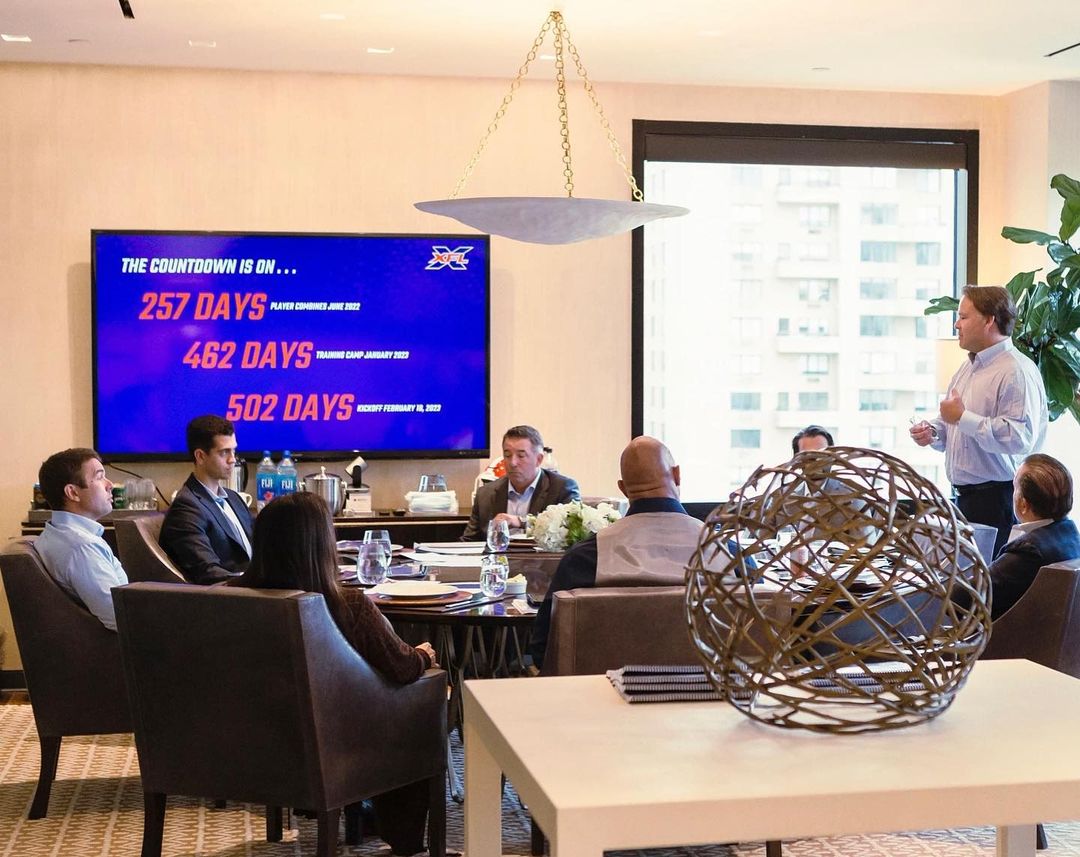 Dany Garcia once again used her Instagram to drop XFL news, posting a few photos yesterday of a league meeting from early October. The key picture featured a countdown of upcoming XFL dates, including player combines slated for June 2022, training camps opening January 2023, and kickoff on February 18, 2023. The latter is the only event with a specific date, though XFLBoard editor Mark Nelson did the math to determine the Combine would be on June 18 and Training Camps on January 9.

Those dates line up closely with the timeline that led up to XFL 2020’s debut. Then, the combines were referred to as Summer Showcases, and took place in each of the league’s eight cities. The Showcases were held from June 7 through July 13. XFL 2023’s date of June 18 lands right in the middle of those dates. It’s unclear whether or not this will be one day of combine activities, or the first day of several tryouts.

The 2022 USFL regular season will stretch from mid-April to mid-June, which means USFL players would be unable to participate in those tryouts (even if not in season, whatever contracts the USFL offers may prevent them from participating anyway). Neither would those in NFL training camps. Oliver Luck mentioned that 2019 Summer Showcases would feature players that would pad out the bottom of XFL team rosters, and it looks like based on the timing, that would be the case once again. That is, unless the USFL is able to poach a significant number of NFL cuts in September that otherwise would have signed with the XFL.

In 2020, the XFL held training camps in a central location, Houston, Texas, from January 4-22. Again, that timeline matches up very closely with the expected XFL timeline headed into 2023. There’s no indication if the league will utilize a single city once again, or if each team will camp at its own home base. Just for fun: XFL 2001 started camps on January 3.

There was some speculation that the XFL could move the start of its season to later in the spring in order to avoid key sports competition such as March Madness. By staying in its traditional slot, it avoids competition with the USFL for much of its season. It also gets a head-start on the USFL in attracting those looking to whet their football appetite during the NFL off-season.

One would assume these dates are subject to change. Yet the timeline appears quite similar to the XFL(s) that came before. Perhaps that’s not so surprising, given that there’s not a lot of wiggle room in when you can conduct training camps prior to a late winter/early spring season. It does reassure fans who have been concerned about the league being “too” different than the 2020 version that some things aren’t going to change.

One other fact worth pointing out from Garcia’s photo has to do with those seated at the table in that picture featuring the timeline. Appearing at the head of the table is Russ Brandon, who was officially named the league’s President of League and Football Operations on November 8. While it’s been known Brandon has been involved with the XFL for some time, based on this photo, he was leading the charge before, perhaps long before, the XFL’s official announcement.

There is a leadership team in place. There is a timeline in place. If we are to continue following XFL 2020’s timeline of announcements, the cities that will participate in 2023 should be named shortly. For better or worse, like most XFL 2023 news to this point, we may have to keep an eye on Dany Garcia’s Instagram for that reveal, too.