Voted the CFL’s Most Outstanding Offensive Lineman while with the Calgary Stampeders in 2016, 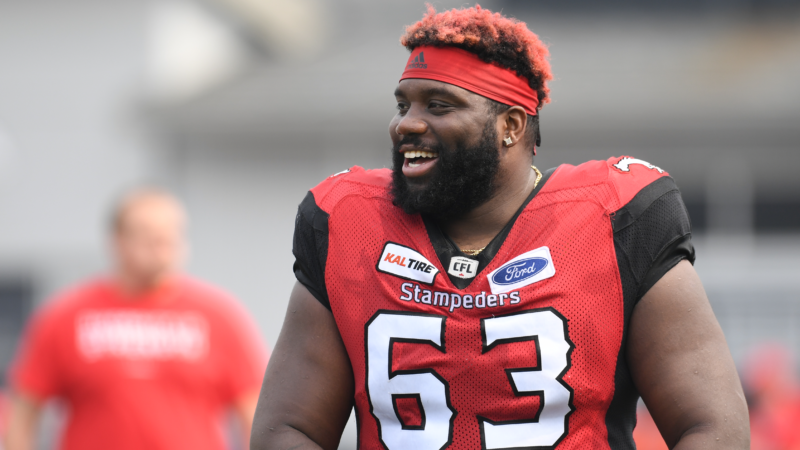 “It’s kind of like riding a bike,” the burly man who tips the scale at nearly 350 pounds said. “You never really forget, you just get readjusted to it.”

It was announced late Tuesday night that Derek Dennis, formerly a standout offensive lineman in the Canadian Football League (CFL), was awarded on waivers to the New York Guardians. Voted the CFL’s Most Outstanding Offensive Lineman while with the Calgary Stampeders in 2016, Dennis helped pave the way for the league’s leading rusher, Jerome Messam.

Along with having the opportunity to play on television, where his family could watch, Dennis listed no longer having to deal with Canadian currency and conversion rates as a positive of returning to the United States to play the game.

“Playing maybe in New York, where I’m from, and my family could come to MetLife,” the newest Guardian said while awaiting allocation last Friday. “They could come to the game and watch me play.”

Dennis, a Temple alum, added that his parents haven’t seen him play a whole lot of football in the past five or six years.

“[It’s] sort of put a squeeze on veterans and teams kind of put an emphasis on where they want to spend their money,” said Dennis, who also spent time on rosters in the National Football League and even the now-defunct Arena Football League. “If you spend it on three or four guys at a certain position, the other guys sort of get left out.”

Other notable players to migrate to the relaunched XFL from the CFL include wideouts S.J. Green, who had 716 receptions for 10,222 yards and 60 touchdowns while with Montreal and Toronto, and former Appalachian State quarterback-turned-receiver Armanti Edwards, who caught 244 balls for 3,181 yards and 16 touchdowns in stints with Saskatchewan and Toronto.

Dennis felt, as a three-time West Division All-Star and Grey Cup champion, that he wasn’t getting the monetary respect he deserved.

“Just from watching how free agency was unfolding for a lot of guys, there were a lot of veterans that I respected that either weren’t getting the offers that they felt they deserved or taking low-end deals to make sure they had a job,” Dennis said.

He stressed that people sometimes forget that, as professional athletes, the players still have a family life with kids at home.

With a wider field and concepts such as the a one-yard buffer between players on the line of scrimmage prior to the football being snapped, Dennis said that playing in the CFL taught him to be patient and to be comfortable playing in space. He also pointed out that 12 men line up on each side, rather than 11, and the process of picking up blitzes and spotting defensive substitutions and sets was more complicated.

“I’m going to probably have to understand that I’m back in the phone booth, which I feel like is really my strength,” said Dennis, who counts his run-blocking as a strength.

Dennis realizes the level of talent in the XFL is high, but he still wants fans to recognize him throughout the course of a game.

“I’m expecting guys that are hungry […] I play with the mindset of, I don’t want nobody to look at me and go ‘Man, that guy sucks.’ Whenever I touch any type of field or court, I’m going to give it my all, 100%, because I want people to walk away with a great intention of me.”

Dennis’ Guardians, having lost two straight after a Week One victory against Tampa Bay, will square off against the Los Angeles Wildcats Saturday afternoon at MetLife Stadium, 75 miles away from Dennis’ high school in Pawling, New York.

Brendan is a senior converged journalism major at Slippery Rock University in Pennsylvania. Along with contributing to XFLBoard.com, he serves as the Sports Editor and has written over 130 stories for his school's award-winning student publication, The Rocket. He has also contributed to the newspaper's campus life section.

XFL Week 3 – Players of the Week – “Fan’s Choice” by XFLBoard.com
Pre-Game: The Vipers matchup against the Defenders