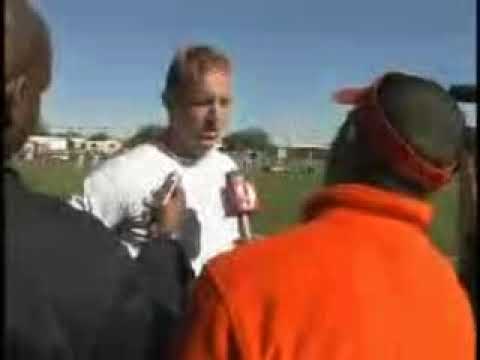 What does Jeff Brohm have to say about the intense hit that Shante Carver laid on him last week in the Asylum? Video by XFLBoard Orlando Rage team reporter Mark Zelakowski.

Orlando – (8 March 2001) — At last the Orlando Rage will get the respect they deserve. They will be the featured game this week on NBC.

“I know the league wants us to be ourselves and express individuality, so we are probably their worst nightmare,” WR Mario Bailey said. “We don’t have any superstars or egos on this team. And you won’t see any nicknames on our jerseys. Instead you have a 45-man roster that thinks, prepares and works as one unit. As the XFL’s only undefeated team, I will say we feel a little bit slighted that we have not been selected as an NBC prime game yet, but that changes this week. Hopefully the nation will see why this team hasn’t lost a game yet.”

Orlando comes into this game the leagues most potent offense and they will face off against the stifling defense of the Las Vegas Outlaws. Brandon Sanders leads the league in interceptions and also leads the stingiest defense in the XFL. Vegas has allowed only 39 total points in 5 games.

The Outlaws will come in and do exactly what they have been doing on defense, they are ranked 2nd in rush defense and 4th against the pass. “They have a great defense that allowing less than eight points a game,” Coach Hall said. “They may be the best team in the West, so this game will be a good barometer of where we are.”

Vegas also brings in a good back by the name of Rod Smart, but you probably know him better as “he hate me”. Rod is ranked 3rd in the league in rushing with 302 yards on 80 carries. Also current acquisition Yo Murphy has instantly become the featured receiver with 2 touchdowns last week in a losing effort against the Enforcers. Expect the offense to look to Rod Smart and Yo Murphy to be consistent and come out with all guns blazin.

“The win last week certainly put as in the driver’s seat as far as the division is concerned, but I don’t think this team is thinking about the playoffs or the division championship. “Rage head coach Galen Hall said. ” Our success to this point has come because we have been preparing ourselves one game at a time. Brian’s success last week certainly doesn’t surprise me. We knew from the beginning that he was a good quarterback and I think our team has confidence in him that he can get the job done.”

After watching practice Wednesday I do not think Brian Kuklick will be starting the game on Sunday. Look instead for a fired up Jeff Brohm to come flying out of the tunnel this Saturday to lead the Rage onto the field.” On Monday, Jeff Brohm underwent further testing in Orlando. But on Tuesday, Brohm was in uniform and took the majority of snaps during practice. Jeff also took most of the snaps during practice Wednesday and looked like he will be ready and able. Head Coach Hall remains reserved. “The tests were all negative and the team doctors cleared him to practice and he wants to play,” Hall said. “We’ll see how he does in practice this week and if Jeff does well he’ll probably start.”

Coach Hall added that Orlando was not planning anything special for the Outlaws. “We’re simple going to try to do the things we do well. Run the ball, control the clock and put ourselves in position to win at the end of the game.” Look for the Rage to send the Outlaws to the gallows and watch “em swing. Extending their streak to 6 and remaining undefeated.