Christian Kuntz is a great asset to any team because of his pure ability to play more than one position, and play them stellar. 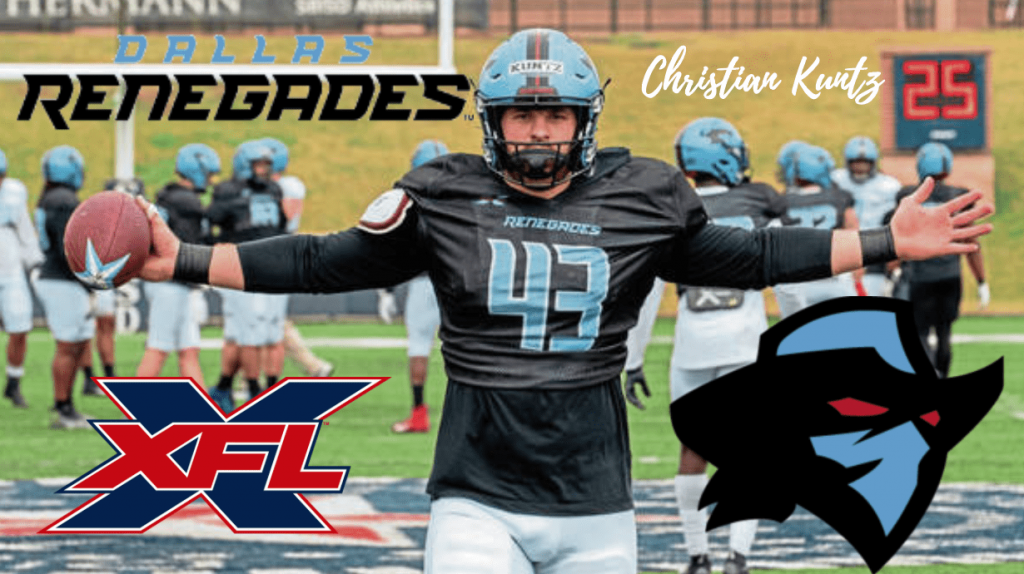 Christian Kuntz played as a linebacker up until graduation from college at Duquense University in Downtown Pittsburgh, Pennsylvania.

An interesting fact about Kuntz is that he won a (WPIAL) conference basketball championship in high school alongside Indiana Pacer TJ McConnell. He played high school basketball and football at Chartiers Valley High School in Bridgeville, Pennsylvania.

Dominating as a Duke

As a Duquense Dukes linebacker, Kuntz put up great numbers each year he played.

Kuntz did get to play his true freshman year, he started his Dukes football with a bang.  He played in all 11 games which included a start in the opening game at Old Dominion University as a true freshman finished with 38 tackles, 15 of those being solo and 2.0 tackles for loss. Kuntz also had 12 stops three being solo and returned an interception 49 yards for a score against Old Dominion University.

Kuntz continues to keep it hot during his sophomore football season. He again started in all 11 games playing as a linebacker.

He would lead the entire nation in tackles for loss per game with 1.8 per game. Thus came the honors of becoming just the fifth Duquesne player to be named All-American (Third Team) by The Sports Network. Kuntz was the first sophomore in school history to earn All-American honors from any source.

He showcased the honors of being the only Duke named First Team All-Northeastern Conference. The linebacker was a two-time NEC Defensive Player of the Week. tied for the team lead with 74 tackles and almost half being solo tackles with 32. He rallied and led the Dukes in tackles for loss with a monstrous 19.5 and sacks landing at 9 total … The monster linebacker would tie for team-high with two fumbles forced. A fantastic game featured an explosion from Kuntz who had a season-high 11 tackles at Sacred Heart University.

The future Renegade also had a game totaling 4.5 tackles for loss 3.5 of those were sacks in the season-ending win at Monmouth.

Kuntz would not be able to play his true junior year due to an off-the-field accident.

The dominant linebacker would comeback to Duquesne as a redshirt junior with a chip on his shoulder. Kuntz would be named team captain for the season. He went on to start all 12 games at outside linebacker.

Kuntz would come back and lead the entire FCS in total tackles for a loss with 26 for -114 yards.  The Bridgeville, PA native led the Dukes with four interceptions for 61 yards and two touchdowns, 11 sacks for a loss of 70 yards, six pass breakups, and six quarterback hurry ups. Those 11 sacks of his were good for third-best all-time in a season at Duquense. He finished the season third on the team with 72 total tackles with 47 solo tackles on his line.

Another fantastic high number tackle game was when Kuntz had a season-high 12 tackles, and seven solo tackles including four for a loss of six yards at Bryant University, the FCS leader in tackles would also add two pass breakups, two quarterback hurries, and an interception with a 42-yard return for a touchdown at the same game versus Bryant University.

He really set a fire in himself after missing a season. That showed he kept striving for greatness through injury and setback, Kuntz never missed a beat.

Sizzling is an adjective to describe his senior year, Kuntz was sizzling hot all year long. He would garner the honors of being named team captain once again, also starting all 10 games.

Kuntz led the NEC in sacks having 11.5 total as well tackles for loss with 24.0. That would carry the Dukes to a bout in the conference title. He would go on to be ranked second nationally in both categories. His 11.5 sacks were the third-most in school history. Kuntz also led the team with seven quarterback hurries. He was a two-time NEC Defensive Player of the Week.

He had a season-high nine tackles, including a career-best 6.0 tackles for loss and 2.5 sacks of his own in a 34-20 win over Dayton University.  Kuntz found forced fumbles a hot commodity having them against Dayton, Kennesaw State, and Sacred Heart. He tied the NEC all-time sack mark with a strip-sack. That would send him into becoming the NEC’s all-time sack leader in the final game of the season at Central Connecticut State.

As the stats show, Kuntz had a very great college career. but this is where things get interesting.

Kuntz would go undrafted in the 2017 NFL Draft but end up signing with the New England Patriots in the preseason. He was signed for a day, then waived. This is where his long snapping journey began.

His journey would continue with many landing spots. Kuntz was signed by the Denver Broncos, Jacksonville Jaguars, Pittsburgh Steelers.

During his time as a Steeler, he played the final preseason game in which he had five tackles and a sack but would be cut during final roster cuts. After a great showing like that he seems unfair to be cut.

Kuntz would catch some views from the Renegades coaching staff. He would be signed as a linebacker but with the intention to become the teams starting long snapper. Kuntz would be the snapper for current Los Angeles Rams kicker Austin MacGinnis who went a perfect 10 for 10 from his snaps.

His long snapping abilities would catch the eyes of the hometown Pittsburgh Steelers once again, they would sign him directly after the season until parting ways once again in early August.

Before the NFL season, he also had tryouts for the Houston Texans and Indianapolis Colts.

Keeping up with Kuntz

It was a great year for all of our specialists! Good luck in Pittsburgh, @ckuntz24! #ForTheLoveOfFootball pic.twitter.com/qOE0H6Sjs3

Christian Kuntz is a great asset to any team because of his pure ability to play more than one position, and play them stellar. He also plays 110% every single play that he is on the field for. It is surprising that he is not with a professional team at this time.