Despite being 2-3, the Renegades are still in 2nd place and hold both tie-breakers over the Wildcats and the Dragons 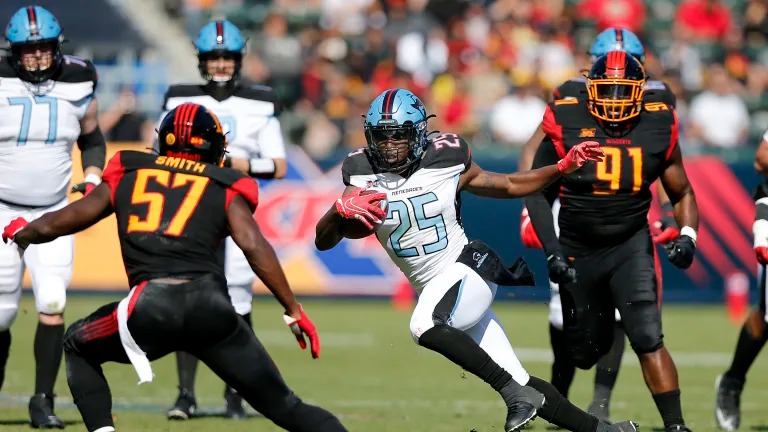 Entering week 6 the Renegades are still winless at home after losing to the Guardians on Saturday.

A week prior the Renegades were close to winning the first ever #TexasThrowdown against the other Texas team, the Houston Roughnecks, but faced troubling times losing their franchise quarterback Landry Jones to a knee injury, and a costly pass by Philip Nelson that was bobbled by Flynn Nagel at the three yard line which was ultimately intercepted by a Roughneck defender which sealed the game.

Despite being 2-3, the Renegades are still in second place in the West division and hold both tie breakers over the Wildcats and the Dragons which they will face in the upcoming weeks.

Dallas will hit the road again this week to face the DC Defenders which in their own right have struggled offensively due to inconsistent play from early MVP candidate Cardale Jones. In the following week they will head to Tampa.

Dallas is currently ranked 3rd in total passing yards, 6th in total rushing yards, and 3rd in total receiving yards which is solid when you look at the stat sheet, but the stats have not translated into wins, and the Renegade faithful is beginning to show impatience with the air raid offense.

In my opinion, the best time to make changes is at the mid-season point, which we see from time to time in the NFL. Every game from this point forward has much higher implications but realistically each team is starting over with the record wiped clean.

Everybody is 0-0, and mathematically no one is eliminated from playoff contention.

Bob Stoops spoke about the changes on Monday. “We appreciate Hal’s hard work and efforts with our squad, particularly after his injury last weekend. Unfortunately, it prevented him from performing in the way we needed for the Renegades.”

Both Blizzard and Jagodzinski have experience being successful play callers. Jagodzinski has had stints in the NFL as the offensive coordinator for the Green Bay Packers in 2006 which his offense was top ten in the NFL for total offense and Tampa in 2009. He also spent some time collegiately as the offensive coordinator for Georgia State (2013-2015) where his offense was ranked top 25 nationally in passing.

Blizzard, led the the offense at Belhaven University from 2014-2016 where his teams ranked in the top two nationally for passing yards on two occasions.

It will be interesting to see how shaking up the coaching staff will bring forth change in the Renegades offense as they have the talent to be one of the best offenses in the league.

An area we will definitely see change will be an increase in the running game after only running the ball a total of ten times on Saturday. Cameron Artis- Payne and Lance Dunbar are averaging 5 yards per carry, and both have been utilized heavily in the passing game.

I also think they will emphasize challenging the defense vertically. Currently the teams leading receiver is tight end Donald Parham who has 24 receptions, 307 yards, and 4 touchdowns, but the only receiver to record a touchdown catch is Flynn Nagel. With the talent this receiver group possesses I think speedy receiver Jeff Badet and lengthy receiver Jazz Ferguson will see more targets this week against a team whose secondary that has given up 221 passing yards per game since week 3.

If the Renegades are able to win the next two games away, they will have the best record on the road in the XFL and it would give them a ton of momentum before heading back home to host the Seattle Dragons March 29th at Globe Life Field.

The playoffs and potentially a championship run is still very possible for this team. Even though the first 5 weeks has been full of ups and downs, this time of the season is typically when teams begin to hit their stride and put together a string of wins to build on to close out the season.

I think this team will respond and we will see a much better performance offensively and as whole from this point forward.