Defenders get back in win column at home

“It makes a huge difference to have what we consider to be the best home-field advantage in the XFL,” D.C. head coach Pep Hamilton said. 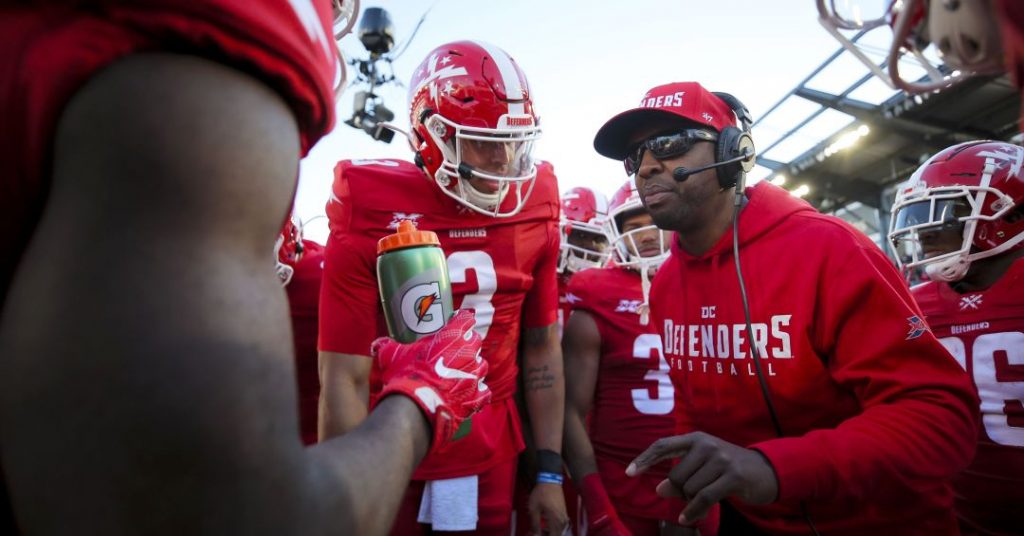 Pep Hamilton talks to his team in one of their offensive huddles. (Credit: XFL.com)

“It makes a huge difference to have what we consider to be the best home-field advantage in the XFL,” D.C. head coach Pep Hamilton said.

After an early interception, D.C. quarterback Cardale Jones was sat down in favor of 6’7” Tyree Jackson, a backup who, up until that point, had attempted four passes.

The switch behind center paid off almost promptly.

After a Taylor Russolino kickoff bounced short at the D.C. 22-yard-line, Jackson and the Defender offense began the drive in St. Louis territory. In three plays, Jhurell Pressley ran for 34 yards. Jackson finished off the drive with a nine-yard touchdown pass, his first of his professional career, to tight end Khari Lee, to take a 6-3 lead.

Reigning XFL Star of the Week Jordan Ta’amu responded by driving the BattleHawks 63 yards for a tying field goal.

After allowing 32 points per game the previous two weeks, the Defender defense held the visitors to six points going into the intermission.

Jonathan Hayes’ offense went three-and-out to start the second half and an ensuing 28-yard DeAndre Thompkins end around was key in setting up D.C. kicker Ty Rausa for a field goal. He nailed it, washing the taste from a miss on his first try, in the second period, out of his mouth. Rausa would connect on another attempt later in the quarter.

From their own five-yard-line after stopping St. Louis on downs, the Defenders would embark on a 12-play, seven-yard drive, bleeding over five minutes off the clock.

Ta’amu and the BattleHawk offense was once again ineffective on the following series, and a Marquette King punt was blocked by linebacker Jameer Thurman and recovered by Jonathan Celestin, who rumbled 13 yards to the visitors’ four-yard-line.

The miscue would lead to Rausa’s third made field goal of the day. Down nine points, the BattleHawks would have one final chance on a fourth-and-one with two minutes left, but Siupeli Anau and Tracy Sprinkle would combine for the stuff, sealing the visitors’ fate.

Ta’amu and his unit couldn’t get it done in the red zone, stalling three times.

With 402 yards, the two teams combined for the most rushing yardage in an XFL game yet.

Leading D.C. was Pressley, who was granted 15 carries for 107 yards. Donnel Pumphery would add another 37 yards on just as many carries, and Jackson demonstrated his mobility with 32 yards of his own. For St. Louis, Matt Jones (13 rushes, 70 yards) and Christine Michael (12 rushes, 69 yards) had almost identical numbers.

With the ground game on track, Jackson, the Mid-American Conference’s 2018 MVP, passed for only 39 yards on 14 attempts. Having thrown for 876 yards and five touchdowns coming into the game, Ta’amu passed for 174 yards on 15 completions, a third of which were pulled in by L’Damian Washington (5 receptions, 114 yards.)

“Cardale is our starter,” Hamilton said, adding that the switch after the interception was purely a coincidence. “The reasoning for playing both quarterbacks is because they both offer specific skill sets that the defense will ultimately have to defend.”

There’s no disagreement or controversy in the quarterback room.

“I’m very comfortable with whatever Coach Pep does,” Jackson said. “He’s been around the game a long time and whatever he thinks we need to do to win, then I trust him.”

St. Louis safety Kenny Robinson, the only NFL Draft-eligible XFL player, pulled in his second interception of the season and, in the fourth quarter, added his first sack.

After jumping offside on a play previous in the second quarter, D.C. edge rusher Anthony Johnson buried Ta’amu for an eleven-yard loss, his first sack since Week Two against the New York Guardians. Safety Tyree Kinnel led the team with ten tackles.

Brendan is a senior converged journalism major at Slippery Rock University in Pennsylvania. Along with contributing to XFLBoard.com, he serves as the Sports Editor and has written over 130 stories for his school's award-winning student publication, The Rocket. He has also contributed to the newspaper's campus life section.