Blandino has been instrumental in the development and implementation of rules and broadcast innovations that have advanced the game of football. 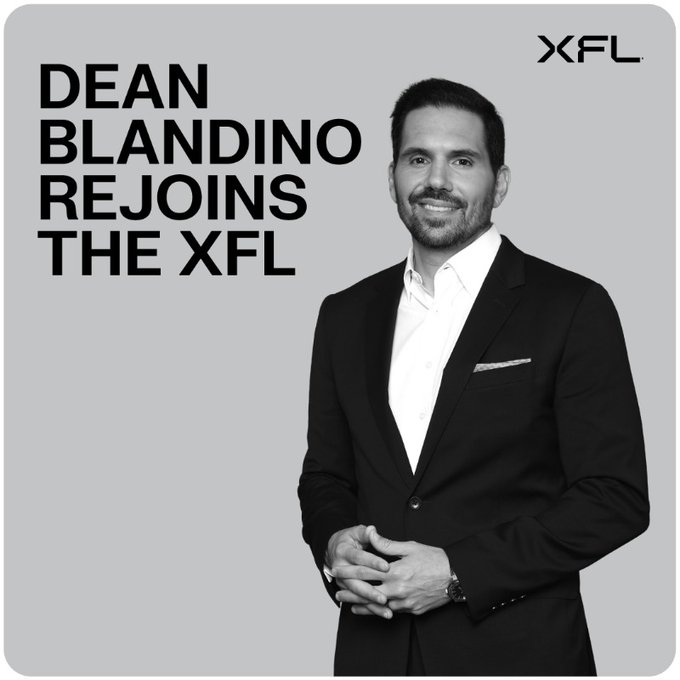 NEW YORK – April 12, 2022 – The XFL announced that Dean Blandino has rejoined the XFL as Vice President of Officiating and Playing Rules Innovation. In this role, Blandino will oversee officiating operations and develop innovative playing rules to achieve the league’s goal of producing dynamic gameplay and a highly engaging and entertaining fan experience.

“Dean is a true leader in the industry and has a passion for advancing and enhancing the game of football. His experience and creativity is unmatched, and we firmly believe that he will elevate our league to a new level,” said Dany Garcia, Co-Owner and Chairwoman of the XFL. “Together, with our ownership group and leadership team, we are building something remarkable. The momentum continues to accelerate and we’re just getting started.”

“Dean has been the go-to name in professional and collegiate football officiating for over a decade,” said Russ Brandon, XFL President, League and Football Operations. “We have the rare opportunity to develop new, innovative rules for this league and Dean’s unique perspective and expert experience are integral to achieving that before we hit the field in 2023.”

Blandino returns to the league after playing an important role in supporting the XFL’s successes during the 2020 season as Head of Officiating. In the role, Blandino oversaw the identification of league officials and helped develop several rules and broadcast innovations, including faster gameplay, unique return formations and rules, and the “shootout” OT tiebreaker. Importantly, Blandino was instrumental in the implementation and in-game functionality of the reimagined rules as well as the XFL’s forward thinking replay system. Blandino will report to Russ Brandon and Marc Ross, Executive Vice President, Football Operations.

“Football is a dynamic and ever evolving sport with increasing global appeal.  From my time in the NFL through to the XFL, my focus has always been on bringing forward ideas and structure that can continue to support the game we love and allow it to grow into the future. Football is my passion and it’s an exciting time to be a part of the XFL as they build a dynamic game that will appeal to fans and players,” said Dean Blandino. “I was thrilled to join the league initially in 2019 and happy to be back alongside this incredible ownership and leadership group as we gear up for 2023.”

Blandino worked in the NFL’s officiating department for nearly 20 years, starting as an intern and eventually ending his tenure as the league’s first Senior Vice President within the Officiating Department. Blandino currently serves as a rules analyst for professional and college football broadcasts. Blandino originally joined the XFL in 2019 as the Head of Officiating.

This announcement comes shortly after the XFL announced it will collaborate with the NFL on select innovation programs related to among other things, rules, player safety and to advance the game of football. Blandino’s appointment is a critical addition to the league’s football operations department, led by Marc Ross and Doug Whaley, which has been actively recruiting players for the 2023 season. Earlier this week, the XFL announced an exclusive partnership with the NFL Alumni Academy to identify the next best players in football and offer more opportunities to play professional football.

What is the NFL Alumni Academy? Examining what the XFL is getting with its latest partnership
XFL Announces Head Coaches