David Could not Beat Goliath 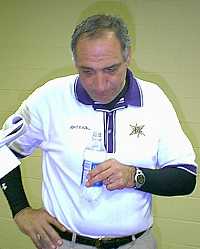 Birmingham – (1 April 2001) — In the Bible David beats Goliath in one of history’s first upsets. For most of Saturday night it looked like that might be happening in Birmingham but in the end the rain began to fall and the game as well as the Bolts season slipped away as 10 thousand cold and wet fans watched helplessly.

The Bolts did finally shore up many mistakes that plagued the offense all season and played their most solid game of the year. Defensive Back Eric Sloan stole 3 Brian Kublick passes returning one for a touchdown. The offense moved efficiently at times with third string Quarterback Graham Leigh at the helm. The coaching staff spelled Bostic with second string Runner Curtis Alexander. Perhaps due to fresher legs Bostic didn’t put the ball on the ground until the final play of the game. The offensive coordinator even called a “trick play” wow where did that come from? However most games come down to basics and the basics tonight were that nursing a slim lead the bolts couldn’t run the ball when they had to. Then the defense which played a good game did what they could not do, let the Rage burn them deep. That along with some extremely questionable calls by the zebras was enough to finish the Bolts for 2001.

But enough negativity, You’ve heard too much from me this year. I want to tell you about what is good in Birmingham.

First off there are no better fans in this league. Sorry San Fran, I know you pack em in at Pac Bell but The Battle hardened 10,163 fans that showed up at Legion Field on a blustery damp cold day to watch a 2 – 6 football team play a team that was simply supposed to demolish the Bolts are the loudest and most devoted fans anywhere in the world. I realize that many including the XFL may look at 10K as a pathetic number but I see 10,000 fans that have stood in the face of adversity and have not blinked. More than anyone else they deserve the respect of this league and this team. My hat is off to all of you that braved the cold and the rain to see the Bolts fight and scratch for a victory. You deserved a victory tonight but it just wasn’t meant to be.

Tailgating. The tailgating at the ThunderBolt games have increased every week. This week I noticed more variation in the menu that ever before and the biggest crab broiler I have ever seen. This week a motorcycle gang showed up with dozens of customized Bikes. Some of the board patrons even showed up at our tailgate to say hi. Most notably he who is known as “bhamfootballfan”.

The ThunderBolt Cheerleaders. I feel I can safely say there simply are no equal to the Birmingham Bolts Cheerleaders. I know it is difficult for them to wear a smile when it is cold and the stands are half-empty. I know that some in the media have called you strippers and sluts. But rest assured, those of us who have braved the cold at Legion know better and we appreciate the effort and the quality of what you do.

ThunderBolt players. Facts are facts and the Bolts are the worst team in the league. But I have never seen one ounce of quit in you guys. Tonight you took a vastly superior team to within 30 seconds of victory. The Gods haven’t smiled upon you this year and no one will ever be able to explain the string of bad luck that has befallen you. But I for one thank you for all the effort you have put forth. Special thanks goes out to Casey Weldon who put his body on the line week after week and paid perhaps the ultimate price for his team. If the Hitmen think that they are going to cruise into Birmingham next week and take an easy victory from the hapless Bolts, thing again. They better bring their “A” game or they will be having an unhappy plane ride home. 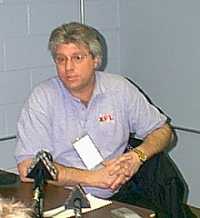 Basil DeVito Jr. made a surprise appearance in the Bolts press box. Basil confirmed the Bolts for another season in Birmingham.
Photo: Bamaslammer

Finally the XFL. To my surprise in the press box was none other than Basil V. DeVito the President of the XFL. He was taking questions from the local press. He was asked repeatedly “Are the Bolts going to be relocated”? DeVito said, “I see now why we are having problems here, At no time has there been a single conversation at the XFL office about moving Birmingham or any other franchise, Yet since I have arrived at Birmingham I have been asked little else. Clearly we should have done a better job before the season explaining that we are going to be staying in Birmingham.” DeVito expanded further saying that Birmingham would long term probably be one of the most successful franchises due to the fact that they draw from two major college powers. Additionally the cost of living in Birmingham is the lowest in the league no where else can a player better afford to stay in the off season and prepare than can the players of Birmingham. We are in the brand building business, moving the Birmingham franchise would go against everything we are trying to do. Regrettably Paul Finebaum was not in attendance at this game so that DeVito and Paul could not scrap it out in person. If Vegas had a line my money is on DeVito.

So, just so we all understand. THE BOLTS WILL PLAY IN BIRMINGHAM IN 2002.

Next week is it for us. There will be no post season, My congrats to those teams that do make it. I can think of no logical reason for people to show up next week at Legion except I know that the few and the proud will be there as they have been all year. And to those of you who haven’t made it to a game or haven’t been to one since the first week. You owe it to yourself to go. The XFL is quickly making all other football seem almost dull. And some of our best and our brightest young people are laying it on the line to represent you.