A look at the decisions made by the Renegades and why many believe they had one of the strongest draft classes of the eight teams.

What a week it has been for the Dallas Renegades as not only did they complete their first ever XFL Draft, but they introduced the renderings of Globe Life Park once it’s officially a multi-purpose field for football and soccer.

The week started with the revealing of the eight quarterbacks assigned to their XFL team and then an additional 70 players were added to the rosters the next two days separating between five different phases with offensive skill players, offensive linemen, defensive front sevens, secondary, and the rest of the pack.

Like I had mentioned earlier in the week in my article recapping day one, Dallas Renegades head coach/general manager Bob Stoops and his staff had a plan already in place. They wanted to add a ton of speed on the offensive and defensive side of the ball.

Let’s take a look at the decisions made by the Renegades and why many believe they had one of the strongest draft classes of the eight teams. 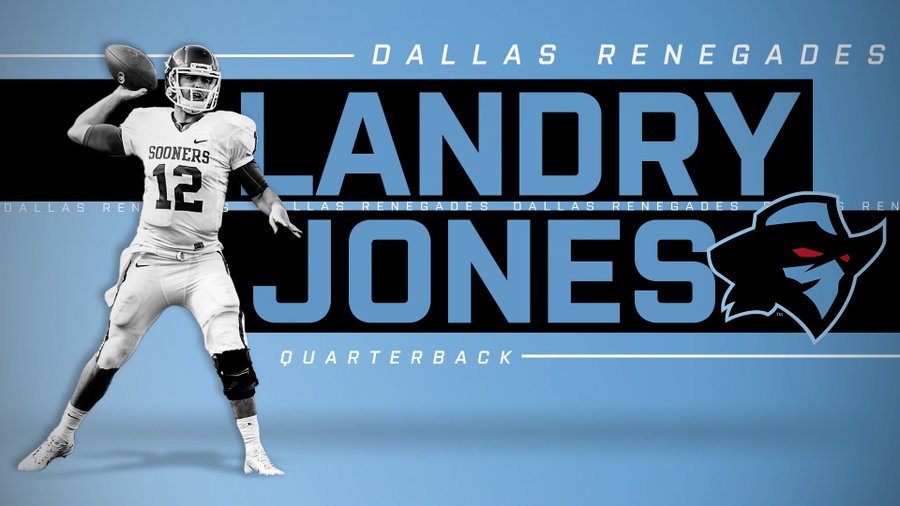 This was the most predictable move of the young XFL league as many had predicted that this might happen to reunite Bob Stoops with his former quarterback. He was one of the most prolific quarterbacks in college football history as he threw for over 16,000 yard and 123 touchdowns at Oklahoma.

His professional experience starting with being drafted in the fourth round of the 2013 NFL Draft to the Pittsburgh Steelers. He started 5 games while appearing in 18 games throwing for over 1,300 yards with eight touchdowns and seven interceptions. After being cut in 2018, he would have short stints with the Jacksonville Jaguars and the Oakland Raiders before being cut by both teams.

Jones should come into the season as the clear-cut starting quarterback as he for now will only have to compete with former San Diego Fleet (Alliance of American Football) quarterback Philip Nelson. He knows Stoops very well and is comfortable in offensive coordinator Hal Mumme’s air raid offense so expect Jones to put up big numbers in the air with his strong arm and smart decision making. He should be an early favorite for preseason MVP.

Stoops and Mumme wanted to have a ton of speed come from their receivers and they got that in Jeff Badet, TommyLee Lewis, Stacy Coley, and Kelvin McKnight as they spent 4 of their first six picks on wide receivers. The only concern coming from this group is the lack of height which they would make up for in the final phase of the draft. Sean Price and Donald Parham should make up for the lack of height as they will be good targets for Jones to throw to on short yardage situations and goal line.

NFL veterans Cameron Artis-Payne and Lance Dunbar make up an experienced and balanced attack coming out of the backfield. I expect to see former Dallas Cowboy Dunbar make a lot of catches out of the backfield on third down as he has one of the best hands on the team with good speed. Artis-Payne should be the muscle as he shines with inside runs while Dunbar will handle outside runs. I expect former Oklahoma fullback Dimitri Flowers to get plenty of carries on fourth and short situations and get some one-yard touchdowns on the goal line as well.

As for the backup quarterback Philip Nelson, the Renegades have one of the best backup quarterback situations in the league by picking up an experienced quarterback. Nelson made a name for himself when he took over for Mike Bercovici as the starting quarterback to Mike Martz’s San Diego Fleet offense. While the numbers can be deceiving as he threw for 513 yards, three touchdowns and three interceptions in four games, he was considered one of the most efficient quarterbacks in the Alliance. With his experience in a pass-happy offense and being mobile when he needs to be, I would feel comfortable with him playing should Jones get hurt in the season.

Versatility is what Stoops was looking for in his offensive linemen and that’s exactly what he found. Led by former nose tackle Alex Balducci in the middle of the line, his experience snapping balls in shotgun with his former college coach Chip Kelly with the San Francisco 49ers and moving around in pass protection should be a good sign for him to command the calls from the line throughout the season. Willie Beavers, Pace Murphy, and Josh Allen have plenty of NFL experience that should help in the line grow into their own. While Maurquice Skakir doesn’t have as much professional experience as the others, expect him to compete and make an impact from day one in pass protection.

Defensive coordinator Chris Woods ran his 3-4 defense at Texas State and it is expected to be the same when he rolls out his defense in game one. Hau’oli Kikaha and Frank Alexander both have plenty of experience in the NFL and showed great pass-rushing experience. The only concern with Kikaha is he’s had a few ACL injuries in his career, but when healthy, he can make a significant difference on the defensive line. Alexander played with Stoops as well in Oklahoma recording 15.5 sacks in his last two years in school. He has a ton of speed off the edge and is the team’s best pass-rusher.

Utah has produced great nose tackles over the years including the Renegades second round pick Sealver Siliga. He has jumped around several NFL teams and played last year with the Salt Lake Stallions of the Alliance. His 340 pound built makes him an ideal fit to stuff the line on scrimmage and should be a problem for teams that want to run the ball on the Renegades. The rest of the nose tackles are much smaller than Siliga, but add some speed and versatility that should help in passing downs.

Every linebacker picked in Phase Three has had previous experience in 3-4 defenses and possesses a ton of speed. Jonathan Massaquoi leads the charge as he played several years in the system in his time with the Atlanta Falcons. He will be looked at as the veteran leader of the defense to make an impact right away. Ray Ray Davison, Greer Martini, and Tegray Scales are younger players with experience in the NFL, but all have great speed that will learn well from Massaquoi and become great pass rushers outside the tackle box.

The first five picks with the secondary was a work of perfection for the Renegades. Having the first overall pick of the phase, they made a quick splash with Derron Smith who is a great tackler and straight up a ball hawk at the safety position. He recorded eight pass deflections and three interceptions in eight games with the San Antonio Commanders last season. He should be an impact right away as a starter and should be considered as one of the best coverage safeties in the league. His former counter part with the Commanders Kurtis Drummond also possesses great tackling skills from the safety position and should be a great run stopper when blitzing.

Their top three corners drafted all have played in the NFL who have plenty of years of experience in coverage. Josh Hawkins leads the way in experience as he had significant playing time for the Green Bay Packers and should be a day one starter for them to help be a veteran leader for the corners. Treston Decoud and Deshaun Phillips have bounced around NFL teams, but were great coverage corners in college and proved in preseasons in the past that they can make an impact on receiver’s routes. John Franklin III is an interesting case as he played quarterback in college at Florida State, Auburn, and Florida Atlantic and was one of the stars of the Netflix show “Last Chance U” when he played for East Mississippi. He converted to cornerback and hasn’t had a chance to make an impact since, but the XFL should be a great stop for him to develop.

The highlights of the final phase includes what they did at the receiver position. They have put themselves in a difficult spot (in a good way) as they will have to decide who to keep on the roster between the eleven receivers they drafted in total. Ryan Broyles highlights the first of seven that were taken in Phase Five as he was a two-time All American for Stoops at Oklahoma recording over 4,500 yards and 45 touchdowns in four years. His NFL career was not as success after being a second round pick for the Detroit Lions only recording 420 yards and two touchdowns in three years. He hasn’t played in five years which will be a tough battle for him to work through that, but there was no doubt how good he was at Oklahoma and should have instant connection with his former quarterback Landry Jones. Notable drafted receivers that some would recognize from college includes former Houston receiver Steven Dunbar, former Texas quarterback/receiver Jerrod Heard, and former Michigan State receiver Keith Mumphrey.

Top defenders drafted late includes former Mississippi State star Johnathan Calvin who recorded 11.5 tackles for loss and seven sacks in his 2016 college season that earned him third-team all SEC honors. Former Ole Miss defensive end Gerald Rivers played several years in the NFL and should compete for a spot on the roster as a veteran. Former NFL linebacker Marquis Flowers saw significant time in his time with the New England Patriots and was effective on defense and played well on special teams recording 32 tackles and 3.5 sacks in 2017. I expect him to also compete for playing time and will be great on special team coverage.

Giving some love to the special teams, kicker Austin MacGinnis played in the Alliance with the Memphis Express as he proved to be a very accurate kicker hitting 9-11 field goals including a 51-yard field goal. New punter Drew Galitz was second in the Big 12 in punting with Baylor averaging 42.1 yards per punt and should be looked at to handle kickoff duties as he did that job in his time in college.

The team Bob Stoops put together was well done as they add a ton of speed on offense and defense. They have one of the most experienced quarterbacks in the league and the Alliance proved that good quarterback play should mean a successful season. Dallas had the deepest receiver core in the league as defenses around the league better be ready for Landry Jones to throw the ball around often.

The defensive line should be able to pressure the quarterback as Kikaha and Alexander should have no trouble getting around tackles and should make one of the best duos in the league. An experience secondary should mean for offenses to be ready for some ball hawks to snap at every pass. The safeties on this team will be able to help on rush defense as well.

With a mix of a lot of former Oklahoma players, experienced quarterback play, and speed on both sides of the ball, I like to see this team as an early favorite to make the playoffs and contend for an XFL title.