Dallas Renegades Head Coach Bob Stoops turned 60. Will he return to the XFL?

When hired, Stoops relished the chance to play a key role in building a new football league. 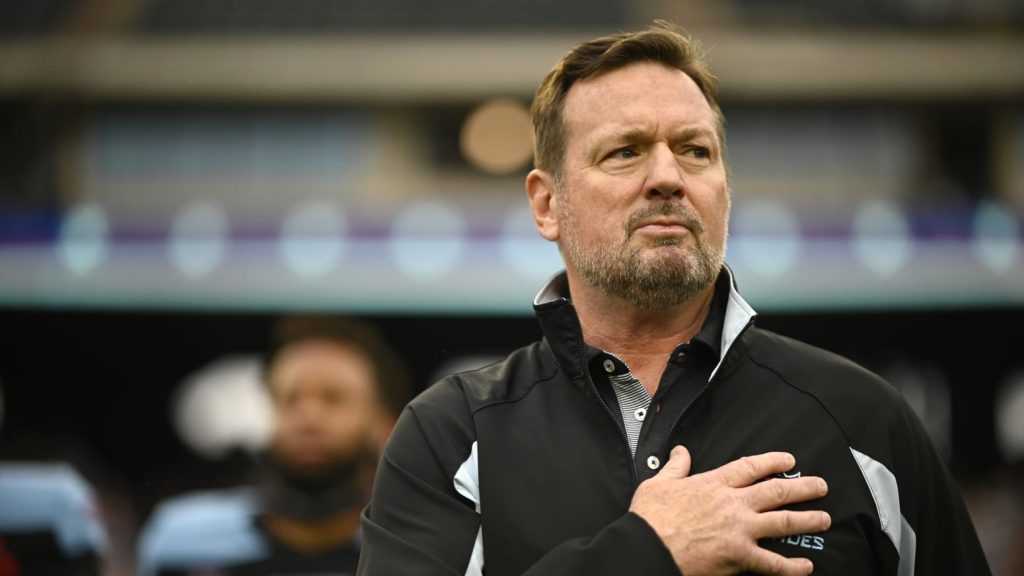 Former XFL Dallas Renegades and Oklahoma Sooners head coach Bob Stoops celebrated his 60th birthday on Wednesday, and we have to wonder what is in store for him.

Stoops ended his stint as Sooners coach in 2016, and then took over the XFL’s Dallas Renegades in their inaugural season, reuniting him with former Sooner quarterback Landry Jones. However, Stoops was laid off after the XFL season was cut short when the league suspended play and eventually declared bankruptcy due to the COVID-19 pandemic.

Today, we wonder if Bob Stoops would ever return to the XFL.

If we go back to January 2019, and the sports world was pondering who would become the XFL’s first head coach, the rumor mill churned out an uncommon candidate. Immediately after well-known NFL reporter Benjamin Allbright tweeted the rumor that former Oklahoma Sooners coach Bob Stoops was considering a job in the XFL, he was met with disbelief and ridicule. Some even wondered if Allbright had got the letters wrong, and had actually meant “NFL.”

What people didn’t know was how XFL Commissioner Oliver Luck had been courting Bob Stoops for some time.

In late 2018, Luck was beginning to reach out to possible XFL head coach candidates, and had spoken to Bob Stoops about joining the league.

It was no surprise that a man like Bob Stoops had apprehensions. Mostly, the thought of being involved with another debacle as the XFL had been in 2001 was not overly enticing.

However, once word had gotten out that Luck had asked Stoops, University of Houston head coach Dana Holgorsen, a good friend who had once worked with Luck at West Virginia University, called Luck to give him a tip.

The tip was simple. Holgorsen had recently met Bob Stoops for drinks, and the retired Oklahoma coach mentioned how he missed football.

Luck saw an opening. If he could convince Stoops that he would be involved in building the XFL from the ground up, and describe it as a job for someone who truly loved football, wanted to improve on the game, and build a team in Dallas the way he wanted… maybe that would be the type of job Stoops would jump at.

Luck quickly called Stoops, and made one more genuine attempt at getting him to come on board. Luck took the time to reassure a skeptical Stoops that the new XFL planned to stay true to the game of football, and even take the time to develop a faster, exciting, player-centric league. He promised Stoops he would be involved in the process to innovate the game, and be a key part of building the vision for the new XFL.

Stoops took the bait. As it was, once Luck laid the cards on the table for a reluctant Bob Stoops, the XFL turned out to be what he was looking for. Stoops had accomplished everything he could in college football. Plus, he wasn’t interested in relocating his family too far away from Oklahoma. He couldn’t see anything wrong with accepting a job with an XFL franchise in Dallas.

Finally, on February 7, 2019, the XFL announced it had hired Bob Stoops, the winningest head coach in University of Oklahoma history, as the head coach and general manager of the XFL team in Dallas.

Stoops made a point of declaring his loyalty to the newly formed XFL, and that it was the chance to play a key role in building a new football league that had contributed to his decision to join.

“I’m looking forward to working with Vince McMahon, Oliver Luck and the great group of people they’ve put together to help develop the XFL and build an outstanding team for fans in the Dallas area,” Stoops said. “When the chance to play a key role in building a new football league came my way, I couldn’t pass it up. The style of play in this league will allow us to innovate and refresh the game, and that makes me excited to get back to the sideline again.”

Once the league had hired Bob Stoops, its credibility was given the boost it needed. Afterward, it became much easier to convince other top football coaches to join the league.

Unfortunately, for Bob Stoops, the job of contributing to building a league, and building a team from scratch was never completed. However, now that the XFL is under the ownership of Dany Garcia, Dwayne “The Rock” Johnson, and RedBird Capital, Stoops must be watching developments with some interest. After all, if the league asks him back, he could continue where he left off, and finish the job he started.

On Wednesday, Stoops’ brother Mike Stoops took to Twitter to wish him a happy birthday, and many more to come.

Happy birthday to my brother, @CoachBobStoops! Hope you enjoy your day. Here’s to you and many more. 🎉 pic.twitter.com/4bW83ZLioN

Stoops himself pointed out that he spent his 60th birthday quaffing “RocknRoll Tequila,” a brand of which he is a part-owner.

Enjoyed some RocknRoll tequila last night for my 60th😋 Want to thank everyone for the kind wishes. BOOMER!! https://t.co/snQQMoJocp

A sixtieth birthday is certainly not a milestone to mark the end of a football coaching career, and for Bob Stoops, the job he began with the Dallas Renegades is not complete. For these reasons, given the opportunity, we believe Bob Stoops would likely return to the XFL.

To the new XFL owners, make it happen. Make the offer. You need a guy like Bob Stoops.